The Real Reasons Behind Climate Change: Revisiting the Old and New Conspiracies 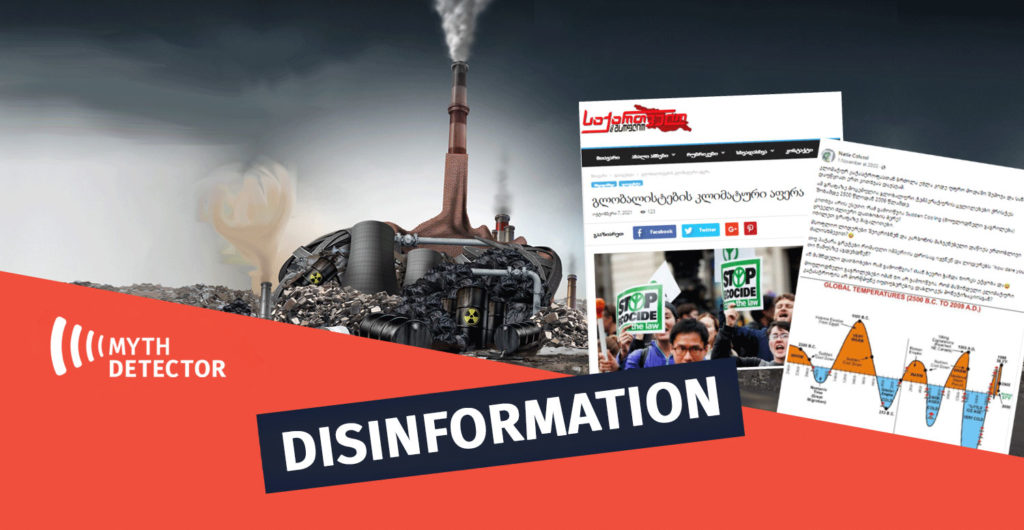 Conspiracies around climate change have recently resurfaced in Georgian social media. Namely, a Facebook user published apost claiming that much like the global pandemic, the alerts around global warming and climate change are fabrications created by the world elites to impose control mechanisms on the population. By using artificially created hunger and fires, the world elites will eventually make the humans give up on cars and other mechanical transportation methods, or even having pets, which will ultimately result in the decline in the world population. Anothervideo asserted that fears invoked by the omnipresent climate change narratives would soon be used by informal world leaders such as Bill Gates and WHO to control the world population. 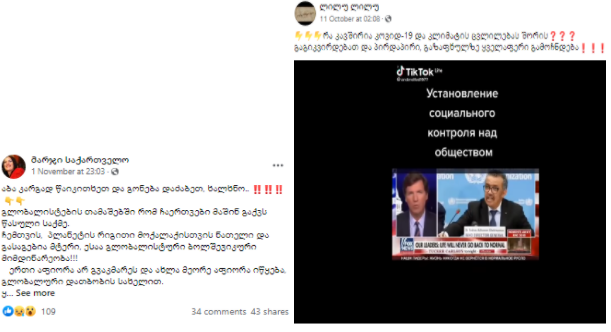 An article published by the pro-Russian online outlet “Georgia and World” developed the same narrative. Using an online website nk.org.ua as their reference, the outlet asserted that climate change was invented by the world elite to shift the population’s attention from the failures of the capitalist socio-economic system and hinder the developing countries from obtaining sustainable industrial development. The article stressed that the most significant share of world carbon emissions (80 gigatonnes) comes from the Pacific Ocean, while human-related carbon emissions are only seven gigatonnes. In addition, the Georgian Facebook blogger Natia Colussi published achart depicting the global climate change dynamics and proclaimed that historically every phase of global warming is followed by the sudden “cooling phase,” making the process a natural phenomenon. 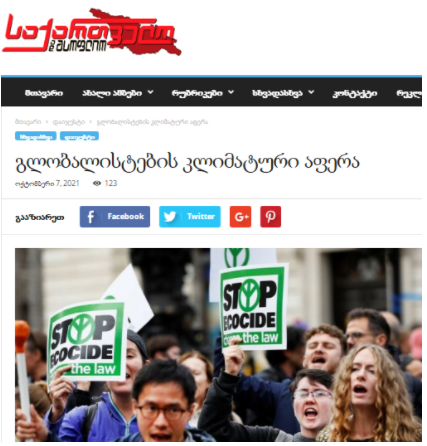 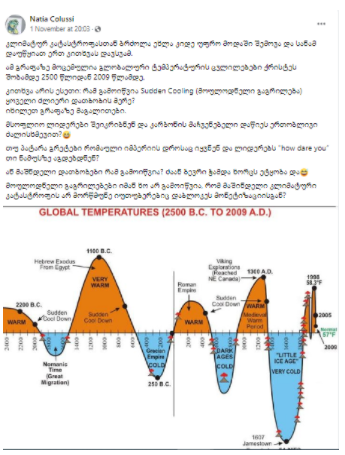 The claim that the alerts around climate change are made up and only used to control the population is false. In fact, 99% of the scientific publications published since 1991 agrees that the world climate is changing rapidly, and the main actors behind the accelerated change are indeed human beings. The assumption that the amount of carbon dioxide emitted by humans is insignificant is disinformation as well.

While the junctures in temperature in individual parts of the world are indeed a natural phenomenon, it is essential to underscore thatglobal climate change implies the change in the average temperature on the Earth’s surface. As demonstrated by the climate change-relateddata, as of 2017, the world temperature has increased by 1°C since 1800. Every decade the temperature continues to rise by 0.2°C. Noteworthy, two-thirds of the increase in the world temperature has occurred since 1975, indicating that the accelerated growth can be ascribed to human activities, particularly the utilization of fuel and exploitation of natural resources. 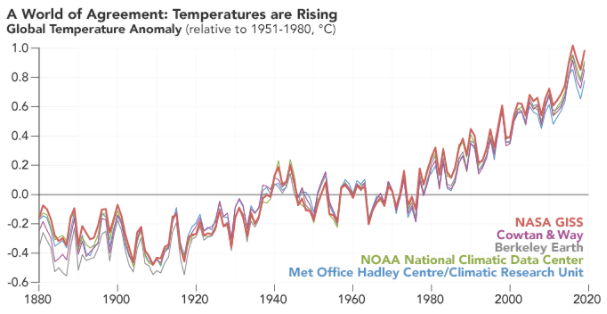 Anomalies on the earth surface in 1880-2020. Source: earthobservatory.nasa.gov

As scientistsnote, the increase of the average world temperature by +1°C can only be caused by accumulating a large amount of energy on the earth surface. This creates a dangerous precedent, as some parts of the world will experience even higher growth in temperature, resulting in the collapse of the local ecosystems and the extinction of some species.

The 3500-pagereport published by the UN Panel on Climate Change further clarified the causing factors of climate change and underscored the pivotal role of humankind in it.  The same report stressed that some processes caused by climate change, such as melting polar ice, are irreversible. Even if greenhouse gas emissions are stopped, glaciers will continue to melt for hundreds of years, leading to a 2-3 meter rise in world sea level.

According to popular belief among those who reject climate change, global warming is part of the planet’s natural cycle, which involves alternating periods of cooling and warming. It is true that throughout the history of the Earth, cold periods of glaciation and warm episodes between glaciations have alternated, but, as scientistsnote, the alternation of warming and glaciation has been going on for about 100,000 years. The change in the planet’s average temperature during one cycle ranged from 3 ° C to 8 ° C. Over the past 1 million years, the warming periods on Earth have been primarilycaused by changes in the planet’s orbit around the Sun.

Astudy published in Science in 2013 also looked at a more extended period to observe planetary climate trends. According to the study, since the last glaciation, or the last 11,300 years, the warming of temperatures has been the fastest in the 20th century. The same study says that if we consider the Earth’s position relative to the Sun over the last 2000 years, the Earth should be in a “cooling phase” according to its natural cycle. However, temperatures on the planet’s surface are still rising.

In fact, the amount of human-emitted carbon dioxideexceeded seven gigatonnes only in 1920. Only in 2019, humankind emitted a total of40 billion tonnes of carbon dioxide, most of which remains the result of the active exploitation of the world’s mineral resources. 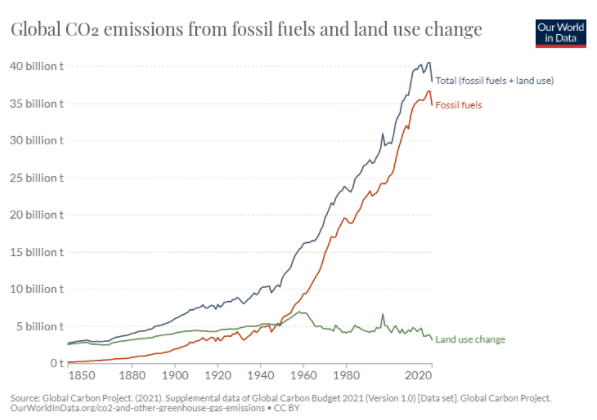 The conspiracy theory, as if the “Paris Agreement” is not aimed at combating climate change but at establishing world government, has been recently brought up by the Georgian blogger Natia Colussi. In addition, according to popular conspiracy theories on Russian-language social networks and the media, the West is using climate change and environmental issues to destroy the Russian economy and subjugate developing countries. For more details, see our articles: