Update: On August 11th, the government of Estonia decided to suspend issuing Estonian visas to Russian tourists. The Minister of Foreign Affairs of Estonia, Urmas Reinsalu, stressed that in the recent period, Russian citizens have been passing through Estonia or coming to the territory of Estonia en masse, which was not in line with the purpose of the sanctions imposed on Russia by Europe. The new regulations will come into effect on August 18th. In parallel with the decision of the Estonian president, old photo manipulation related to the former Estonian president was actively disseminated on social networks.

The same photo was circulated in Georgia in 2020 when Sandro Bregadze, one of the leaders of the far-right “Georgian March,” published the photo on his personal Facebook account with the description: “Estonia’s idiot president and the homosexual head of the intelligence agency (on the right) – the Georgian March is a destructive force – when they say this, only then I feel that we are the mightiest!!!” 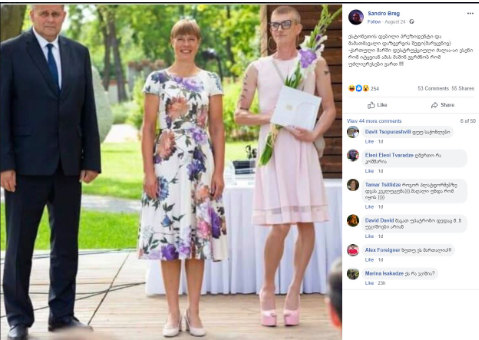 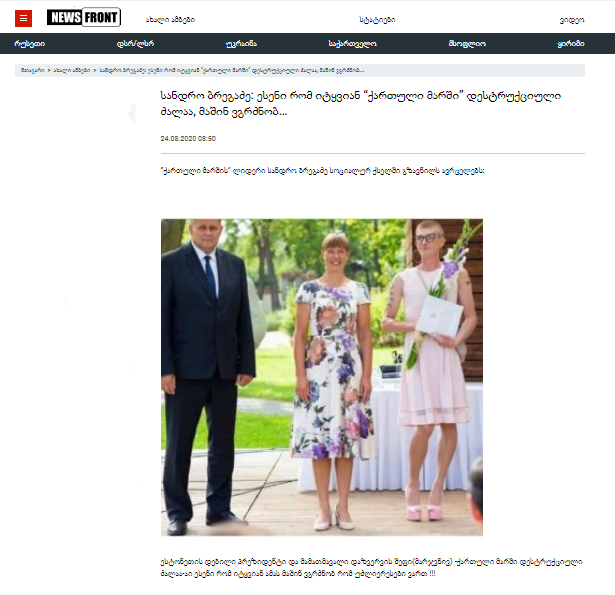 The picture disseminated on social media is photo manipulation. The mentioned photo depicts neither the son of the former president of Estonia nor the head of intelligence, but the Estonian writer, translator and cultural critic Mikk Pärnits. The head of Estonia’s foreign intelligence service is Mikk Marran.

Tracing the Origin of the Photo

The above-mentioned photo was taken at an event held on August 18th, 2020, where eight people received the “Violence Prevention Award”. One of the eight awardees is the Estonian writer, translator and culture critic Mikk Pärnits. Notably, the head of the Estonian foreign intelligence service Mikk Marran is not depicted in the photo.

The photo features the former President of Estonia, Kersti Kaljulaid (in the centre), (she was succeeded by Alar Karis on October 11th, 2021) and the former Minister of Justice of Estonia, Raivo Aegi. It was Aegi who conferred the award to Pärnits. Later, he removed Pärnits’ name from the list of awardees. As Aegi wrote on the official Facebook page, the reason for the removal was Pärnits’ attire and the speech they gave at the award ceremony. Pärnits noted during the ceremony that a traditional family is the most dangerous place for a child.

As for the former president of Estonia, Kersti Kaljulaid, she has 4 children. Two of them, Silja Märdla and Siim Talvik, from her first marriage with Talvik and two sons, Kaspar and Georg, from his second marriage with his current spouse Georgi-Rene Maksimovski.