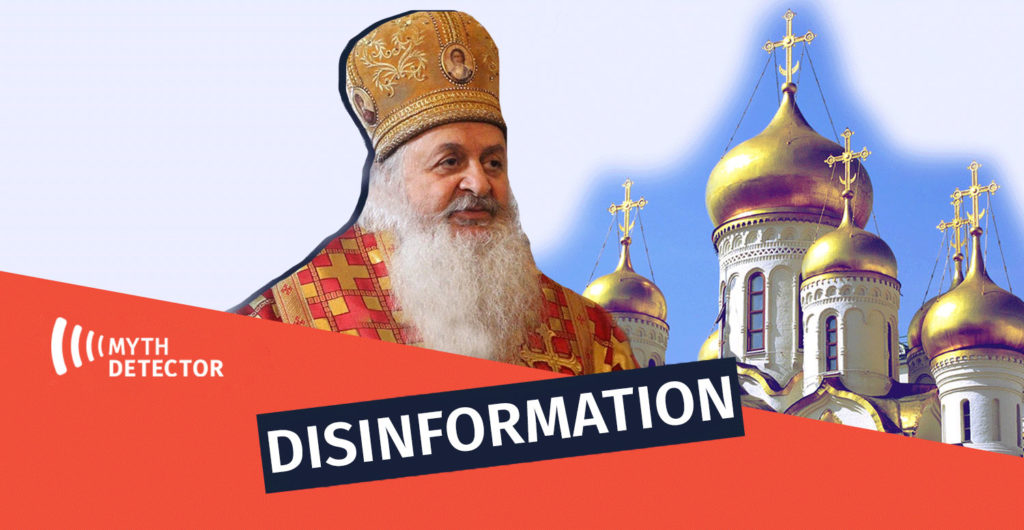 Amid the existing military conflict between Russia and Ukraine, Bishop Spiridon of Skhalta has started preaching against Ukraine during talks at the Church. On March 13th, while speaking about the history of the “Kyivan Rus,” he noted that Russians and Ukrainians are one ethnic group, and now brotherly nations are at war with each other because of the instigation by a “third power.”

On April 11th, 2022, another sermon by Bishop Spiridon was published by the Facebook page “ღმერთი სამშობლო ადამიანი,” [God, Homeland, Human Being] in which the bishop said that the Patriarch of Constantinople had no right to grant autocephaly to Ukraine independently and that his actions were dictatorial. In the same video, the bishop stated that the Russian Church considers Abkhazia and Samachablo to be the dioceses of the Georgian Church and that the recognition of the autocephaly of the Ukrainian Church can change this.

Bishop Spiridon: “What right has [the Patriarch of Constantinople] to decide on such a great issue of the granting or non-granting of autocephaly. This is dictatorship… In addition, Abkhazia is recognized by the Russian Church as the Diocese of the Georgian Church, Samachablo is recognized as the Diocese of the Georgian Church. What if angry and insulted Russia sends a bishop there and says this is not your diocese, but it is now mine, what do you do then? What can we do if Russia decides officially seize these dioceses… why do we make the Church as an enemy?”

Bishop Spiridon’s assertion is manipulative and false. According to ecclesiastical tradition, the Church of Constantinople has the full right to grant autocephaly to the Church of Ukraine. As for Russia’s current recognition of the Abkhazian and Tskhinvali dioceses as part of the Georgian Church, this recognition is only of a formal nature, as the Abkhazian Church has been ruled by a Russian bishop for years, and Russian influence in both dioceses is growing.

The claim that all other churches need to agree to grant autocephaly to a specific church has been circulated in the Kremlin media and on social media in the past as well. In the context of the Russia-Ukraine war, the disinformation campaign around Ukrainian autocephaly has intensified once again.

Notably, in general, there is no specific ecclesiastic law on granting autocephaly, and in such cases, the churches are mainly guided by past experiences and tradition. In 1970, the Patriarch of Constantinople, Athenagoras, wrote about this in a letter to the Russian Patriarch, criticizing him for issuing a Tomos of Autocephaly to its former archdiocese in North America in violation of the rules.

Patriarch Athenagoras: “Specific canons exactly characterizing autocephaly are not to be found in ecclesiastical legislation. However, certain general guidelines and provisions, relative to autocephaly, may be gathered from the basic principles of such legislation. These, moreover, are to be found clearly stamped in the canonical conscience of the Church and in its history, and have been repeatedly expressed, and are distinctly printed in the Tomes that were published on the occasions of the founding of the newer local Autocephalous Churches.”

First of all, it should be noted that such an action by Russia would be illegitimate, as Russia is neither the Patriarchate of Constantinople nor the mother church of the dioceses of Abkhazia and the Tskhinvali region.

Notably, the manipulative aspect in Bishop Spiridon’s statement lies in the fact that the churches of the Russian-occupied regions are now considered part of Georgia only in a formal understanding, as Russia has practically captured and subordinated these churches in a complete sense.

Back in 2018, Archbishop Ilia Chighladze stated that the Russian Church had been interfering in the affairs of the churches in Abkhazia and the Tskhinvali region in various ways, which is manifested in the following:

It is also important to note that the Russian Church may consider parts of the occupied territories to belong to the Georgian Church, although Russian Patriarch Kirill never mentions Georgian Patriarch Ilia II by full name, in particular, the title “Metropolitan of Tskhum-Abkhazia” is always omitted.

As for the myth of “Big Brother” and the “Kyivan Rus” used by Bishop Spiridon to label ethnic Russians and Ukrainians as one nation and legitimize Russia’s aggression against Ukraine, “Myth Detector” has been writing on the topic in the past as well. Read more here: