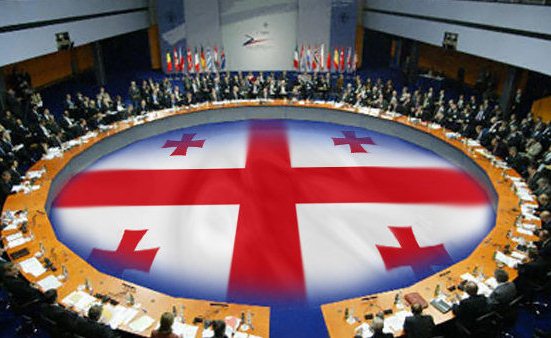 The misconception that integration with the West undermines Georgia’s territorial integrity is part of Russian narrative and is propagated in Georgia mainly by anti-Western forces. The reality is that in legal terms the Euro-Atlantic integration means Georgia’s accession to Euro-Atlantic structures together with the currently Russian occupied territories of Abkhazia and Tskhinvali region/”South Ossetia”. The examples of countries which faced territorial problems when joining NATO and the European Union also prove that Euro-Atlantic integration can contribute to ending the occupation and recovering territorial integrity.

The European Union, for example, acknowledges the territorial integrity of Cyprus and considers the northern part of the country as the territory occupied by Turkey since 1974. Since Cyprus joined the EU in 2004, Brussels identifies the entire island as an EU member state and the people living on its territory as EU citizens. However, the EU has temporarily suspended the application of its legislation to the northern part of Cyprus which is not presently under the central government’s control.

The talks on bringing the end to occupation and unifying Cyprus stepped up especially during the country’s accession to the EU and after the completion of this process. Following several derailed rounds of talks, in 2014 the President of the Greek Cypriot Republic and the leader of the Turkish Cypriots agreed on a joint declaration which should build a basis for a new round of talks. Governments of Greece and Turkey also supported the declaration and the renewal of negotiations. The text of the declaration underscores the readiness of the Greek Cypriot and Turkish Cypriot communities to live in a united Cyprus within the European Union based on the principle of equality.

The 2009 US-Georgia Charter on Strategic Partnership also supports Georgia’s sovereignty, independence, territorial integrity and inviolability of borders as the foundation of bilateral relations between the parties. One of the most recent resolutions on Georgia, passed by the US Senate, calls on “Russia to end its occupation of the Georgian territories of Abkhazia and South Ossetia.”

After every so-called elections conducted in the occupied regions of Georgia, Western countries and international organizations issue official statements emphasizing the illegitimacy of those elections. For example, the statements regarding the so-called presidential elections in Abkhazia in August 2014, read:

It is also worth noting that Western states have taken numerous practical steps to ensure the inviolability of Georgia’s borders. For example, Russia’s attempts to have other countries, either through providing support to them or pressuring them, recognize Abkhazia and Tskhinvali region as independent states, was averted only owing to the efforts of Georgia’s Western partners. Moreover, since September 2008, the European Union Monitoring Mission (EUMM) has been patrolling in the areas adjacent to the line of Russian occupation and monitoring the fulfillment of the 2008 ceasefire agreement between Russian and Georgia. Apart from a task to “ensure that there is no return to hostilities,” the EUMM also aims at building “confidence among the parties.”