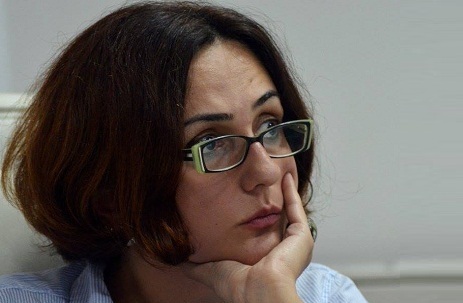 Modern Georgian clergy talks a lot about women, but not about the women whose lives are systematically lost to domestic violence in our country. Clerics and the Patriarch often remind us that woman is obliged to obey her husband and “wash his feet”, and that home as the place for woman’s self-realization has been established not by patriarchic culture, but by God. Clerics usually ideologically justify this discourse by specific epistles of Apostle Paul used in the sermons which we hear so often. Specific quote from Apostle Paul is the following one: “Christ is the head of every man, and the man is the head of a woman, and God is the head of Christ”  (1 Cor. 11, 3). At the same time, while defining woman’s social role and function clerics actually repeat Apostle Paul’s argument from the first epistle to Timothy, according which the only way to salvation of the soul for a woman is to have children: “For Adam was first formed, then Eve. And Adam was not deceived, but the woman being deceived was in the transgression. Notwithstanding she shall be saved in childbearing, if they continue in faith and charity and holiness with sobriety.” (1 Timothy, 3, 12/15). However, while making this argument the clergy forge the cornerstone of Christian theology, that Christ suffered for the human race in order to achieve atonement for the original sin, and redemption of a person from the original sin is reached through the main of the seven Holy Mysteries in the life of any Christian – baptism. Thus, Christian ethics is the ethics of individual guilt, not collective one. Importantly, this is also stated in the epistle of Apostle Paul to the Romans: “So then every one of us shall give account of himself to God.” (Rom. 14, 12).

While interpreting Christian worldview in such one-sided way, the Georgian clergy overlook not just this thesis of individual ethics stated by Apostle Paul, but also the universalist context of the epistle to the Galatians, where Paul speaks about unity of the Christians, whatever their ethnic or social background, or sex: “There is neither Jew nor Greek, there is neither bond nor free, there is neither male nor female: for ye are all one in Christ Jesus.” (Gal. 3, 28). This thesis of equality expressed in the epistle to the Galateans, born within Christianity, today is confirmed on the legal level in the Universal Declaration of Human Rights.

After careful reading of the epistles one gets legitimate suspicion that our high-level clerics interpret Paul’s texts in one-sided way in order to create for the 21st century Georgia the ideological narrative which will create the basis for patriarchic social order oriented on subjugation of women, while presenting family life as the woman’s foremost responsibility. While laying basis for such worldview they forget historic fact that Apostle Paul himself sent women to conduct apostolic activities, which is confirmed in his own epistle to the Romans: “I commend unto you Phebe our sister, which is a servant of the church which is at Cenchrea that ye receive her in the Lord, as becometh saints” (Rom. 16, 1). Also, paradoxically, by restricting women’s role in the Church by the status of nuns only, our clergy neglects the role in the history of the Georgian Church of a woman, St. Nino, with whose sermons and missionary activities Christianity in Georgia was established. With such attitude we not only belittle the role of the woman who brought Christianity to Georgia, but also forget history of the previous century, when there was an attempt to rethink the role of the woman in the Georgian Church: On 15 September 1917 Georgian female public figure Mariam Dadiani-Anchabadze addressed Sioni Catholicos’ Council, saying: “The Christ’s faith taught is this [equality for women]. For this we women demand having proper place in the affairs of religion and I personally, as the chairperson of the Sokhumi Georgian Women Society firmly defend the principle of achieving equality and demand that women get the right to be not just readers in a church, but also to preach and, more generally, to conduct missionary activities.”

Editors of the Georgian Woman’s Voice newspaper, in the 24th issue of which the text of this address was published, noted that “the church council heard with great attention and accepted this speech. The same issue was also addressed by the representative of Alaverdi Diocese Al. Giurjidze-Tsitsishvili.”

It is an expression of the gap in our tradition and culture that nobody would dare to repeat the words of Mariam Dadiani-Anchabadze in front of today’s Sinod Council in the modern Georgia.

Source: Elizbar Diakonidze, deacon: „The woman has been given the best place by God. Here women also follow spiritual way, but they stay nuns, they are not tasked with saving other people’s souls. When a woman must become mother, this is the greatest blessing. Do you think that Eve actually bit the apple? Maybe that was the poison importance of which was proved by the gift? Let’s think about this. If apple was meant directly, then it would not be a Lenten product.” (Geworld.ge, 2 April, 2014).