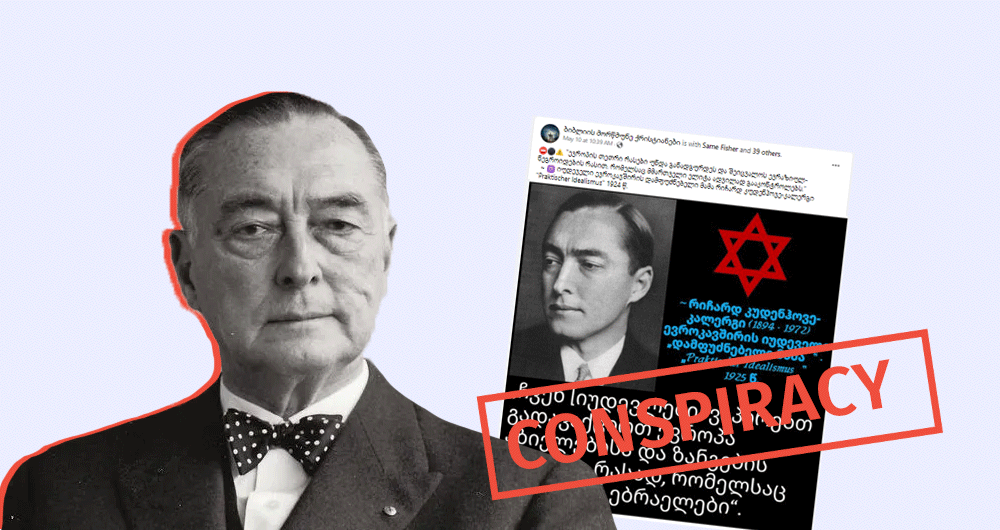 On May 10th, 2022, the Facebook account “Christians Believing in Bible” published a post allegedly quoting a Japanese-Austrian politician Richard von Coudenhove-Kalergi. According to the quote, the white races of Europe must be destroyed and replaced by the Eurasian-Negroid race, after which Europe will be controlled by the Jews. The post cites Kalergi’s 1925 book – Practical Idealism. 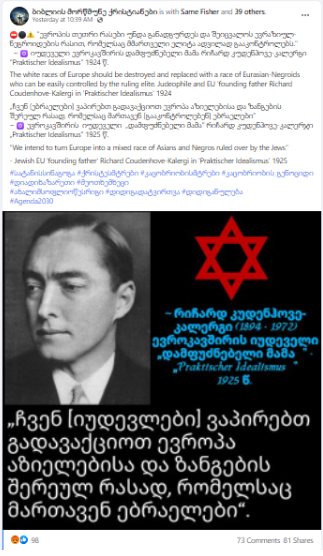 The claim that in his book Practical Idealism, Richard von Coudenhove-Kalergi stressed the need to exterminate the white race is part of the “Kalergi Plan” conspiracy theory and is based on a misinterpretation of Kalergi’s work.

The “Kalergi Plan” is an anti-Semitic and far-right conspiracy theory according to which Richard von Coudenhove-Kalergi devised a plan to mix the white race with other races and make the white race disappear. In fact, in his book ‘Practical Idealism’, Kalergi discusses not the plan for the extinction of the white race, but talks about the process of racial integration and suggests that people of the distant future will be of mixed race.

Kalergi: “the man of the future will be of mixed race. Today’s races and classes will gradually disappear owing to the vanishing of space, time, and prejudice. The Eurasian negroid  race  of  the  future,  similar  in  its  appearance to the ancient Egyptians, will replace  the  diversity  of  peoples  with  a  diversity  of individuals.”

According to Martyn Bond, author of the biography of Richard von Coudenhove-Kalergi, in his work on the mixing of races, Kalergi described current processes objectively and suggested that as the various factors of globalization intensify, this process would continue in the future. Bond said it was a description of events and not some kind of instruction, and to argue that Kalergi’s goal was to make the white race disappear by racial mixing is a gross misinterpretation of his papers. Kalergi’s writings show that he wanted to strengthen Europe and believed that only the United Continent could compete with the United States and the Soviet Union.

Kalergi was a supporter of European integration and believed that integration would create an opportunity to avoid a world war. Because of his liberal views, Kalergi became the target of attacks by Hitler’s party. The Nazis argued that Kalergi’s vision was a Masonic plan and aimed to enslave Europe.

According to historians Roland Clark and Nikolaus Hagen, the conspiracy theory of the ‘Kalergi Plan’ originated in Nazi Germany. In November 1940, the Nazi Party newspaper, the ‘Völkischer Beobachter’, accused Kalergi of dreaming of creating a world of Eurasian-Negroid people, which would be ruled by the Jews. Clark and Nikolaus point out that the newspaper’s claims were a mixture of misinterpretation and fabrication of Kalergi’s work. Another Nazi newspaper accused him of having links with Jews and the Freemasons. Notably, Kalergi himself was not of Jewish descent, although he actively opposed anti-Semitism. Kalergi fled Austria in 1938. He lived in the US until 1945 and returned to Austria only after the war.

Claims about the “Kalergi Plan” were also debunked by the American fact-checking organization PolitiFact. According to PolitiFact, there is no evidence that a “Kalergi plan” exists. Various sources even suggest that the ​​conspiracy is based on misinterpretations and fabrications of Kalergi’s works by Nazis and neo-Nazis.