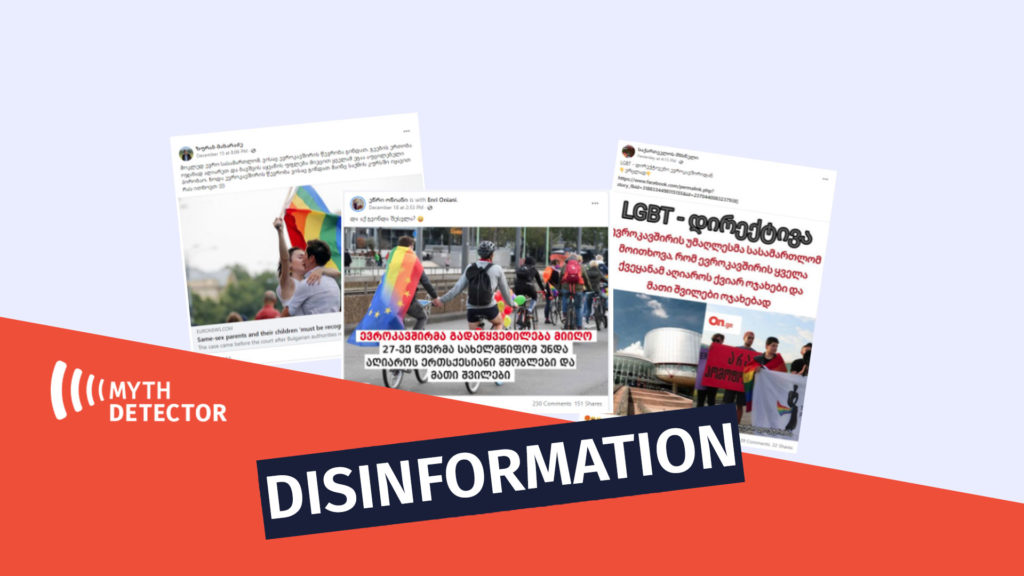 On December 15th, Zura Makharadze, chairman of the Conservative Movement, a party founded by the radical violent media outlet Alt-Info, published a post claiming that the Court of Justice of the European Union obliges its prospective members to “recognize the union between gay people as a family and accept their right to adopt a child.” On December 18th, a similar post was published by the Facebook user Enri Oniani. On December 19th, Irakli Jankarashvili’s article entitled “LGBT Directives from the European Union” was published on the website of the pro-Kremlin online outlet “Tvalsazrisi.” The article asserted that the CJEU demanded that the EU members recognize queer families and their adoptive children, including countries where gay marriage is illegal. Jankarashvili further stated that everyone should understand that the European Union is the main creator of the perverse lifestyle, encouraging sexual confusion.

On December 19th, a post containing similar information was published by the Facebook user “Savior of Georgia.” 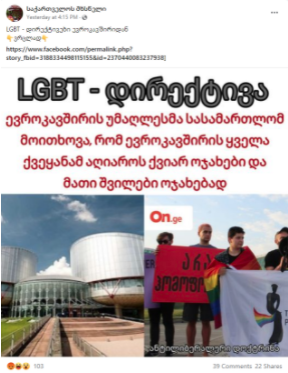 The claim that the Court of Justice of the European Union has demanded from all EU member states to recognize queer families and their children is without context. In fact, the CJEU stressed that individual countries could decide for themselves whether to allow same-sex marriage and childbearing, although the right of the child to move freely should not be restricted because member states do not recognize same-sex marriage.

On December 14th, the Court of Justice of the European Union heard the case of Sara, who was born in 2019 in Spain. Her parents are registered in Spain as a same-sex couple, Kalina Ivanova, a Bulgarian citizen, and Jane Jones, a British citizen born in Gibraltar. Nonetheless, under the 1981 British Citizenship Act and the Spanish Citizenship Act, since neither parent is a Spanish citizen and Jones was born in Gibraltar, Sara cannot become a citizen of those countries.  Consequently, the couple applied for Bulgarian citizenship for Sara, which was denied because Bulgaria did not recognize same-sex marriage, and the child could not have two mothers. Kalina Ivanova has appealed the case to the Sofia Administrative Court, which has contacted the EU court of Justice for advice. According to the judgement of the CJEU, Spain has already established a relationship between a child and a parent with a birth certificate stating that the parents are of the same sex, and therefore Bulgaria must issue a passport to the child based on this same document. The court clarified that this does not mean that all EU member states should recognize same-sex marriage under its national law but stressed that the child’s right to free movement should not be restricted because member states do not recognize same-sex marriage.

Based on the judgement of the EU Court of Justice, the final ruling must be made by the Sofia Court. Until the judgement, Sara will not be able to leave Spain due to the lack of relevant documentation.

A similar decision has been made by the EU Court of Justice in the past as well. For instance, on June 5th, 2018, a court heard the case of a Romanian man and his American partner. Romania, which does not recognize same-sex marriage, has claimed that an American man as a spouse was not eligible to apply for EU citizenship. The court ruled that the couple had the same right to citizenship as other married couples in an EU member state, even though that country did not recognize same-sex marriage. Romania has ignored the court ruling, which was condemned by the European Parliament in a resolution issued this year.

Notably, same-sex marriage is legalized only in 16 member states of the European Union.