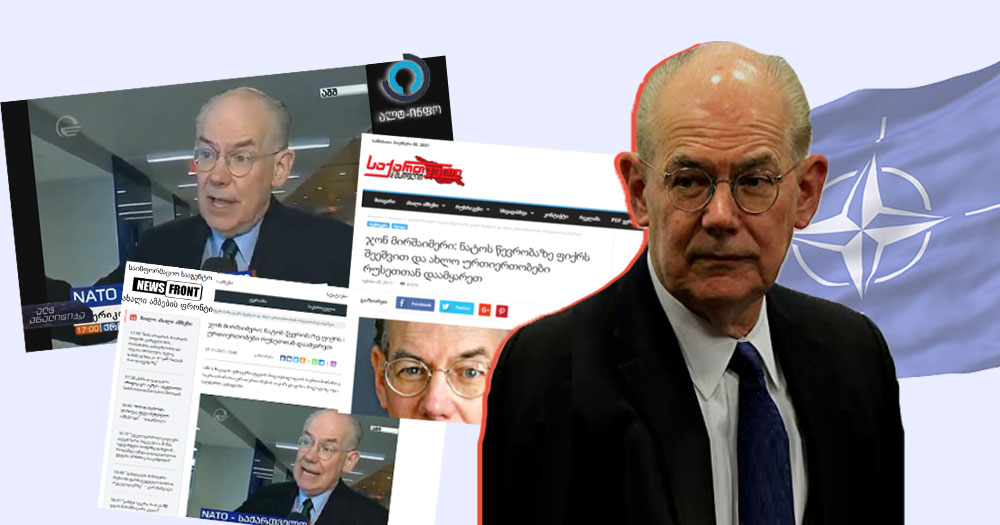 Messages against the North Atlantic Alliance in pro-Kremlin publications have intensified ahead of the NATO Ministerial in Riga. To incite scepticism about NATO, pro-Russian actors disseminated a quote from the American political scientist from a 2016 interview with Voice of America (VOA) in a coordinated manner. Instead of Russia, Mearsheimer considers China and as a priority for U.S. security.

On November 26th, the hosts of Alt-Info aired an excerpt from the “Voice of America” story, in which American political scientist John Mearsheimer comments on relations between Georgia, NATO, and Russia. Mearsheimer stated that Georgia should stop thinking about joining NATO and normalize relations with Russia. The hosts of “Alt-Info” commented on this statement, noting that even though “Voice of America” ​​is an open propaganda media of the U.S. government, it still tells the truth to the Georgian people.

The hosts did not specify the exact date of Mirsheimer’s comment.

John Mearsheimer, Political Scientist: “Georgia must forget its desire of joining NATO, establish as close a relationship with Russia as possible, and only then begin its integration with Europe, only in economic terms.”

Shota Martinenko, Host at Alt-Info: “There is an international relations analyst, John Mearsheimer, one of the most authoritative analysts, one of the most authoritative theorists in America, and I saw a very interesting interview from him on VOA, I do not know when it was shot, I think it is an old record … “Let’s listen and see, maybe Putin really bought it, let’s analyze it.”

Zura Makharadze, Host at Alt-Info: “Dear U.S. Embassy, your Government spends colossal amounts of money to maintain an openly propagandistic media outlet called the Voice of America, and you are having a big mess there because the Voice of America is now telling the truth to the Georgian people, which is very good, but in the context of agitation-propaganda It’s weird. It looks like you’re leaving from here.” 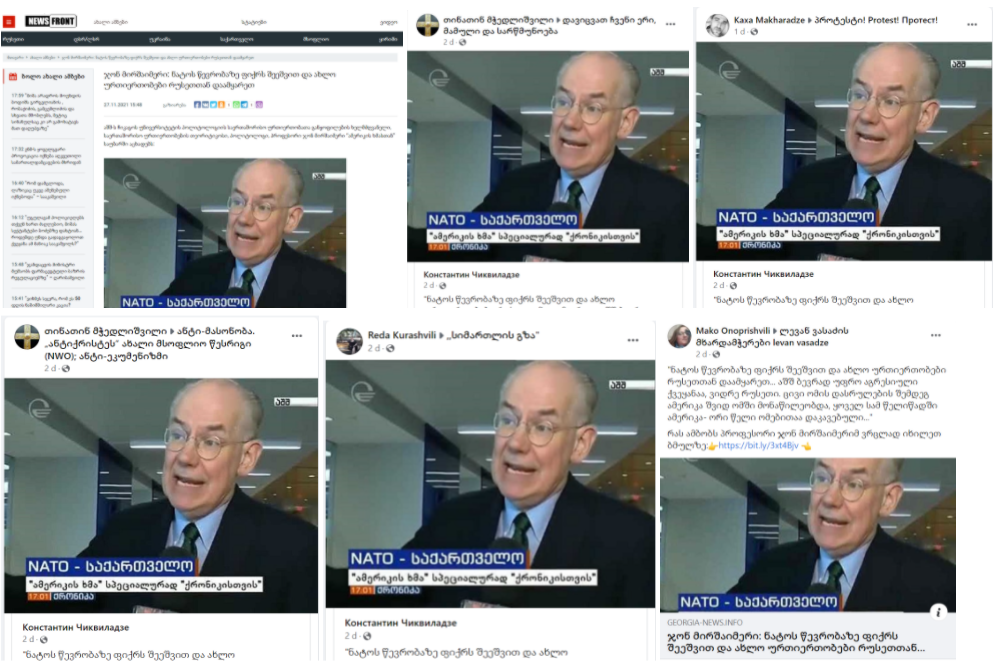 John Mearsheimer made a comment with the VOA in 2016. Mearsheimer expressed his position as an international relations expert, which neither reflects the official position of the United States nor other American experts who were represented in the “Voice of America” ​​story. Mearsheimer’s statement, which was cut from the VOA story, has been circulated in fragments by various anti-Western groups since 2017.

The story of “Voice of America” ​​prepared for the “Imedi TV” program “Kronika” was aired on June 13th, 2016. The story deals with the prospects of Georgia’s membership in NATO and reviews the views of various specialists, including John Mearsheimer. The story includes comments from both supporters and sceptics of Georgia’s membership in NATO. In 2018, an allegedly fake account, “Tite Natutari’ (account no longer available), published only John Mearsheimer’s comment with the following description: “John Mearsheimer: American expert on international affairs: America is more aggressive than Russia.” Back then, the editorial board of VOA made a special statement to expose the fake account for altering the content of the story. For more information, see the material of “Myth Detector”:

Noteworthy, before 2018, Mearsheimer’s comment excerpt was published by the pro-Russian publication “Georgia and the World” authored by Konstantine Chikviladze in 2017. 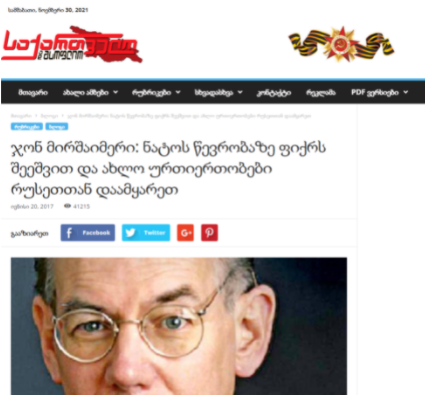 At the end of the “Georgia and the World” material, a 1:50 minute video of the YouTube channel Tbilisi 24 entitled “John Mearsheimer, Expert in International Affairs” is used. The identical video was also used by News-Front in the November 27th, 2021 material.

YouTube channel Tbilisi 24 is a part of the news agency “Tbilisi 24” Ltd. The disinformation and manipulation allegations spread by the agency have been regularly fact-checked by “Myth Detector” in recent years.

As for the recent remarks by John Mearsheimer on the North Atlantic Alliance, in recent years, he has placed particular emphasis on the importance of the U.S. state security focus on China. He took part in the Atlantic Council debate “Is NATO still relevant” in July 2020. During the meeting, Mearsheimer noted that China should become a priority for U.S. state security.

John Mearsheimer, Political Scientist: “I’m not somebody who disliked NATO during the Cold War, but the fact is folks, we live in a completely different world. In fact, the world has undergone two fundamental shifts in the distribution of power since the cold war. For most of my life, Europe has been the most important area in the world strategically, but that is no longer the case, simply because the distribution of power has changed, and today Asia is the area that matters the most for the United States today.”

Mearsheimer has been speaking about the issue of the Chinese threat in 2019 as well, linking the future of NATO to the U.S. presidential elections of 2020.

John Mearsheimer, Political Scientist: “It is no secret that NATO is in serious trouble today and I think it is mostly because of Donald Trump. If Trump had not been elected in 2016, the problems would not be as acute as they are now.”

Noteworthy, Mearsheimer is a well-known scientist, theorist, and policy researcher, although his views on U.S. security and foreign policy are his own and do not reflect the official position of the state.