The Falsification of History: In 1801 Georgia Joined Russia of Its Own Free Will 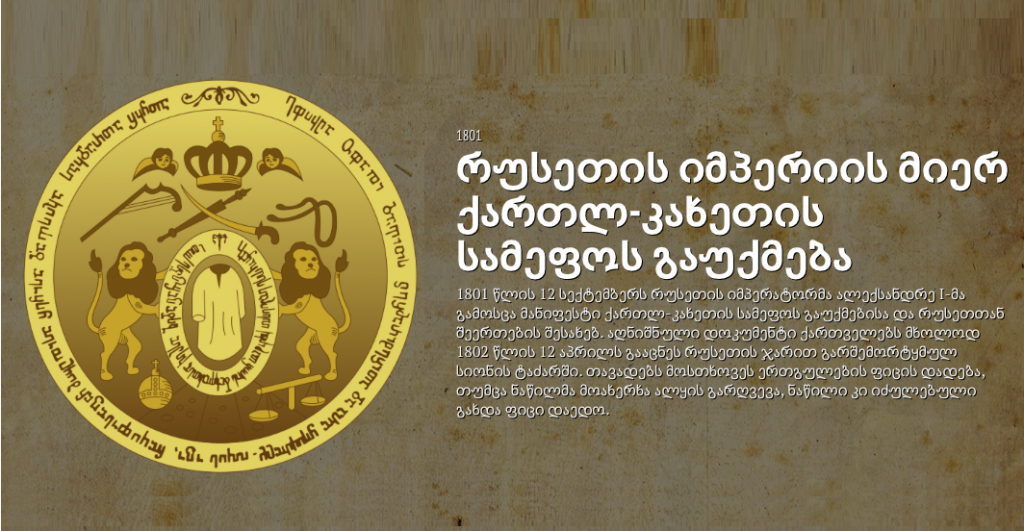 On October 25, 2017, online editions Geworld.ge and Sakinform released an identical article headlined “Neither God, nor Mankind Needs Ungrateful Man and Nation!” The publication contains historical fabrications about the Russian-Georgian relations in the 19th century. The author rejects annexation of Georgian kingdoms and principalities by Russia and notes that Georgia joined Russia of its own free will that, as the author claims, had a positive influence on its development.

Fabrication No.1: In 1801 Georgia joined Russia of its own free will.
Real fact: In 1801 Russia annexed the Kingdom of Kartli-Kakheti.

Georgia did not join the Russian Empire of its own free will. In 1801 Russia annexed the Kingdom of Kartli-Kakheti. Subsequently, Russia also annexed other kingdoms and principalities of Georgia.

the death of King George XII, his son, Prince David of Georgia should have ascended the throne, but Russia went against it. After annexation, Prince David, together with other representatives of the Royal House of Bagrationi, was exiled to Russia. By this, Russia averted a threat of restoration of the monarchy in Kartli-Kakheti.

Fabrication No.4: In 1878, Russia returned Adjara to Georgia.
Real fact: By receiving Adjara in 1878, the Russian Empire expanded its own territories.

the July 13, 1878 Treaty of Berlin, Russia took control of Adjara, Kars and Ardahan; moreover, upon the Britain’s initiative, the Batumi port was granted the status of Porto Franco (free economic zone). Porto Franco transformed Batumi into a European-style city, which attracted investors from the oil industry sector. Construction of the Batumi-Baku railway in 1883 goes back just to that period.

Real fact: Batumi, Kars ad Ardahan were ceded by Russia to Turkey under the Treaty of Brest-Litovsk signed in 1918.

Under the peace treaty signed in Brest-Litovsk on 3 March 1918 between the Bolshevik government of Soviet Russia and the Central Powers (Germany, Austria-Hungary, Bulgaria, and the Ottoman Empire), Russia ceded Kars, Ardahan and Batumi to Turkey through neglecting the interests of the Transcaucasian government. The Transcaucasian Sejm convoked by the Transcaucasian Commissariat on February 10, 1918 refused to cede Kars, Ardahan and Batumi to the Ottoman Empire; however, Turkey insisted on meeting the commitments of the Brest-Litovsk peace treaty.

this situation, General Otto von Lossow, head of the German mission to Georgia, pledged Akaki Chkhenkeli, the Head and Foreign Minister in the government of the Transcaucasian Democratic Federative Republic, that his country would protect Georgia against Turkish occupation and recognize the country’s independence. In 1918 Georgia declared its independence with the support of Germany.