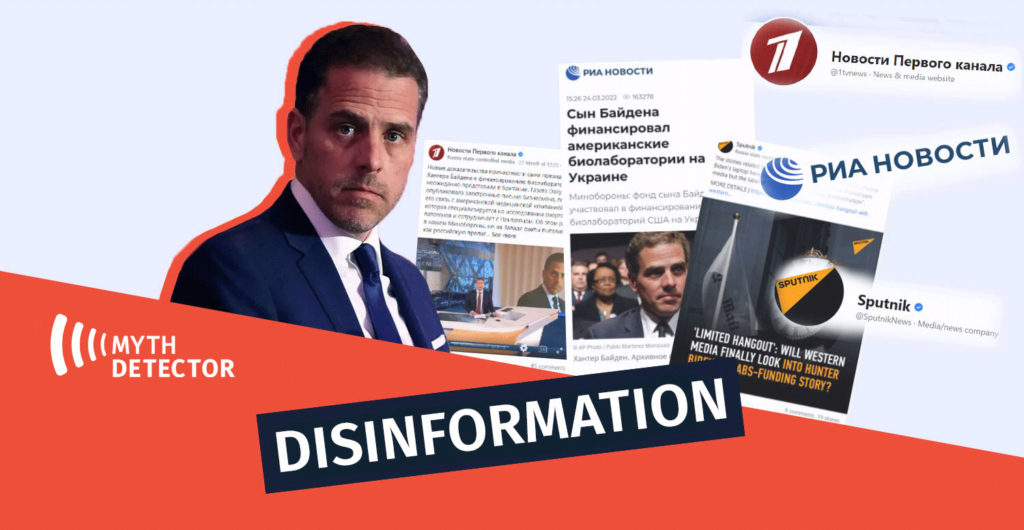 From March 24th onwards, the Russian-language media and the Georgian Facebook accounts have been actively spreading information about Hunter Biden’s alleged involvement in the production of biological weapons in Ukraine.

Russian-language outlets base the claims mainly on two sources: the March 24th briefing by Igor Kirilov, the commander of the Russian Army’s Atomic, Biological and Chemical Defense Forces, and an article published in the British “Daily Mail” on March 25th.

In a March 27 story, Russia’s “First Channel” claimed that American company “Metabiota” had appeared in Ukraine with the help of Hunter Biden and started working on the pathogens that are life-threatening and could potentially cause a pandemic. On March 28th, the same channel used Hunter Biden’s alleged link to Ukrainian bio-laboratories to construct an apocalyptic scenario in which a US-funded bio-laboratory spreads the virus aimed to destroy livestock in Russia.

In addition, based on the Daily Mail, two other media outlets, РИА Новости and Sputnik, published an article claiming that Hunter Biden is involved in the development of biological weapons in Ukraine. 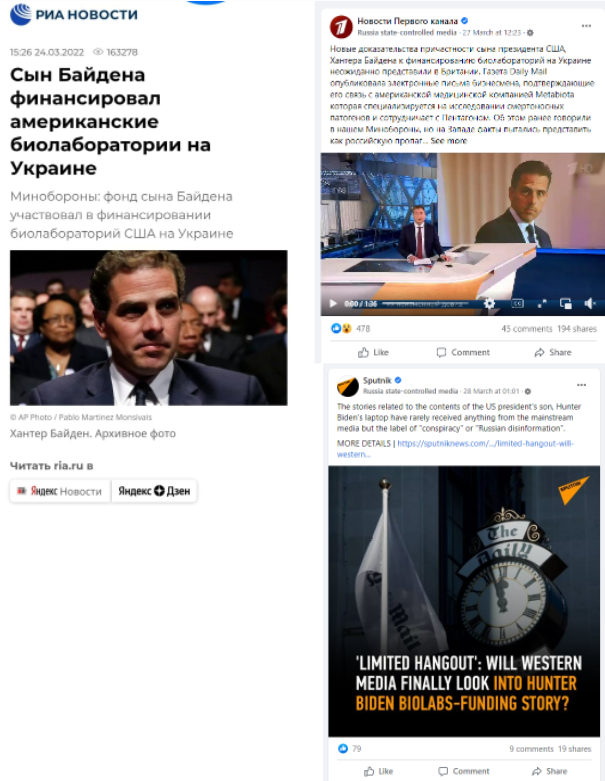 As for the dissemination of the information on Georgian social media, “Dito Bidzinashvili” and “Irakli Vladimeri-dze Zakareishvili” published posts on March 24-26th about Hunter Biden’s alleged connection with Ukrainian laboratories and dangerous research.

On March 28th, “Beka Vardosanidze’s Blog” also claimed that Hunter Biden was involved in creating deadly diseases and bio-weapons in Ukraine, while Ukrainian bio laboratories were producing biochemical weapons at the behest of the Biden family. 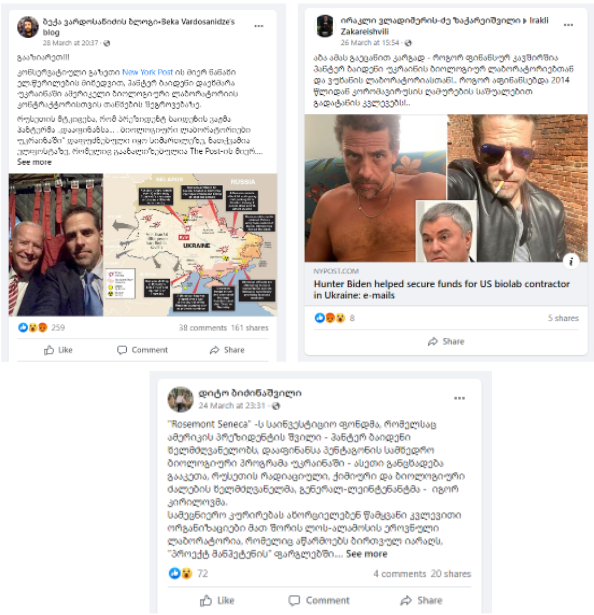 The authors of the posts published on Facebook claim that the company “Metabiota” was able to establish in Ukraine with the help of Hunter Biden, who used his connections to raise funds and allow the company to conduct classified research on life-threatening pathogens. In addition, the posts hint that the funds received by the company were used to create biological weapons.

Metabiota is an American company founded by virologist Nathan Wolfe, and its original function was to assist bio laboratories in selecting qualified personnel. At present, the company offers customers three primary services: 1)  Monitoring the spread of infectious diseases among humans and animals together with local authorities to identify diseases that are potentially dangerous to public health; 2) Assistance in developing better disease control strategies through disease surveillance and training of local researchers; 3) Consulting research centers to improve biosafety, quality of observation, disease control and etc.

Until 2014, Metabiota was a non-profit organization. This year the company decided to change its profile and started looking for investments in the local market. During this period, the company received $ 18.4 million in funding from the Defense Threat Reduction Agency (DTRA), of which only $ 307,000 was earmarked for operations in Ukraine. The funding was extended until 2017, after which the company no longer received funding from the agency for its activities in Ukraine.

In parallel, Metabita received funding from Rosemont Seneca Technology Partners (RSTP), a company that mainly funds growing technology companies. According to The Washington Post, Metabiota was primarily present in African countries and had only one office in Ukraine, employing six people (5 locals and one foreigner) and conducting scientific research on the dangers of tularemia and Siberian ulcer in Ukraine. The study was undertaken in the framework of the company’s overall goal, which was to develop a system for detecting potential biological hazards at an early stage.

In Ukraine, Metabiota was one of the contractors of the American firm Black & Veatch. The latter aimed to improve the diagnosis of diseases and build new laboratories.

Currently, Metabiota no longer operates in Ukraine. Information about this is published on the official website of the company: 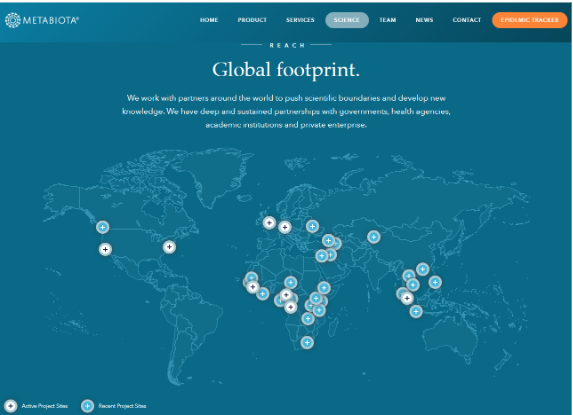 The aforementioned Russian and Georgian sources claim that Hunter Biden was directly involved in funding the process of producing biological weapons in Ukraine and the implementation of the U.S. military biological program.

In 2014, following the expulsion of Hunter Biden from the Navy Reserve, he also lost his membership in the RSTP and from the beginning of 2015, he no longer had any connection with the mentioned company or its financial transactions.

As for the ongoing investigation into Hunter Biden, it concerns the Ukrainian oil and gas company – Burisma. The inquiry will investigate whether the Foreign Entity Registration Act (FARA) was violated, which instructs lobbying companies operating in the United States to disseminate comprehensive information about their international connections. The investigation has nothing to do with Ukrainian bio laboratories or the activities of Metabiota in the country.

On March 25th, the British “Daily Mail” published an article in which the author of the article – Josh Boswell – claims that the emails obtained from Hunter Biden’s laptop confirm the Russian Federation’s claim that Ukraine produces biological weapons.

The authenticity of the emails published in the article is not confirmed by open sources. In addition to these emails, the author uses Igor Kirilov’s briefing as the primary source of information.

The author of the article discusses several emails, including 1) Metabიota Vice President Marie Gutierrez’s email to Hunter Biden, in which the author of the email tells Biden about the activities of Metabiota in Ukraine and names “Ukraine’s assistance in gaining cultural and economic independence from Russia.” 2) Vadim Pozharsky’s e-mail to Biden, in which the author asks questions about Metabiota’s plans for Ukraine and mentions the “Science Ukraine” project.

Photos published by the Daily Mail: 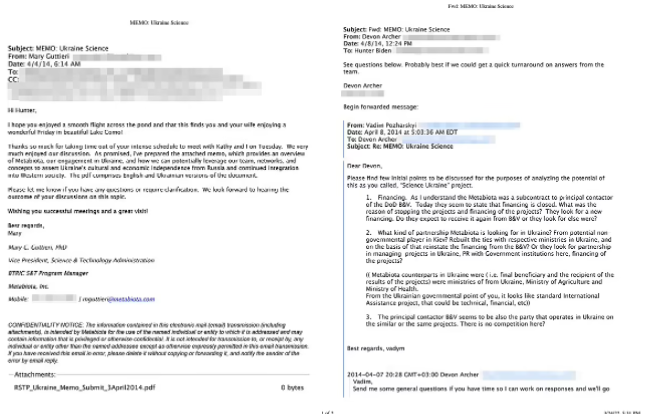 Neither of these two emails confirms that the collaboration between Metabiota and Burisma took place. Also, none of the emails mentions the involvement of Ukrainian bio laboratories or the production of biological weapons. Consequently, even if the authenticity of the emails were to be confirmed, one still could not talk about Hunter Biden being involved in the creation of biological weapons.

The article contains four more emails: The first email, according to the author, confirms that Rosemont Seneca Technology Partners transferred $ 500,000 to Metabiota; It’s similar to the activities of one of the CDC employees (referred to as Xiaoying), so there may be a collaboration between the two, while the fourth e-mail, according to the author, confirms the connection between Metabiota and the United States Department of Defense.

Listing the emails in the article in such order gives the impression that the author obtained it in secret. In fact, as already mentioned, the information voiced in these emails (excluding the third email) is available to the general public.

In addition to Hunter Biden’s links to bio laboratories, the Facebook post contained two more allegations that the Myth Detector had fact-checked previously:

The Daily Mail, cited in the published posts, is a British outlet characterized by sharply right-wing positions and is often publishes conspiracy theories and propaganda.