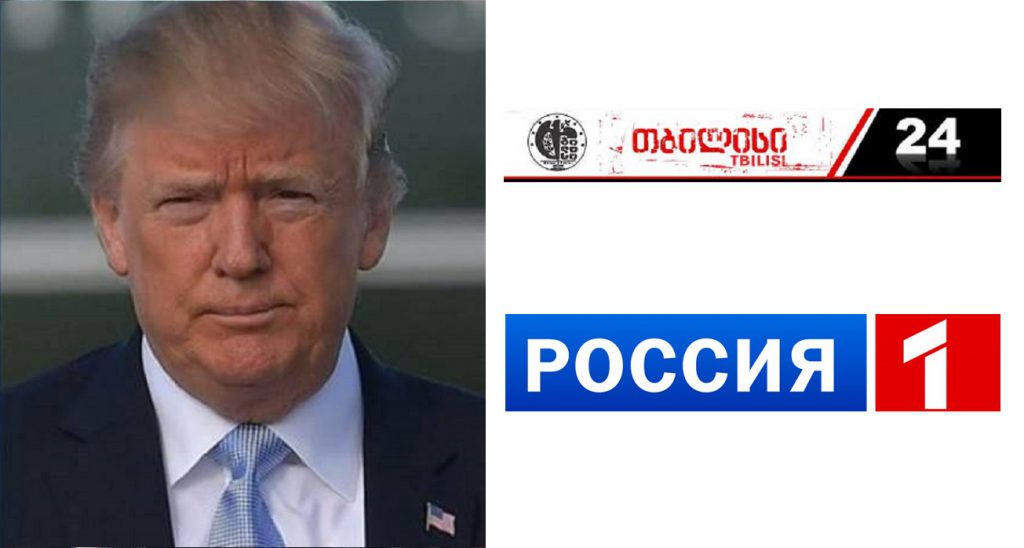 On April 4, 2018, an online edition Tb24 released an article titled “Getting along with Russia is a good thing… Together with you, if it is possible, we want to get along with Russia.” The article highlights the meeting between U.S. President Donald Trump and the heads of the Baltic States held at the White House on April 3. According to Tb24, “extraordinary Trump threw cold water on the wishes of the heads of the Baltic States” and instead of covert political terms, he pointed out directly that they should make friends with Russia. Russian-language BBC is referred to as a primary source of the material.

The article released by Tb24 is manipulative.  One of President Trump’s quotes is fabricated and two are incomplete. On April 3, during a joint press conference held after the meeting with the heads of the Baltic States, Donald Trump did not tell them that they need to have friendly relations with Russia.

During the April 3 meeting at the White House, which was dedicated to the 100th anniversary of independence of the Baltic States, bilateral political and economic relations between the Baltic States and the United States were discussed. The United States reiterated its strong support for the independence and sovereignty of these countries and also noted their important contribution to NATO operations in combating terrorism.

During the joint press conference held after the meeting, a reporter from Estonian Public Broadcasting asked the U.S. President about relations with Russian President Vladimir Putin. In response, President Trump emphasized the importance of having dialogue with Russia, mentioned the issue of expulsion of Russian diplomat by the United States and noted that “nobody has been tougher on Russia than I have.” President Trump said: “I think I could have a very good relationship with President Putin.”

To prove that President Trump openly called on the heads of the Baltic States to make friends with Russia, Tb24 provides three quotes by the U.S. President, two of which are incomplete and one cannot be searched either in BBC’s Russian-language material or the official transcript from the meeting released by the White House (see table below). Tb24 even used the fabricated quote in its headline. An independent Russian TV channel Дождь also made comments on the fabricated quote. In an article released on April 10, the TV channel notes that President Trump congratulated the leaders of Latvia, Lithuania and Estonia on the 100th anniversary of independence. He did not speak about the Soviet Union that is also confirmed by the transcript from the meeting.