Street Parade or Protests Against COVID-19 Restrictions in Berlin? 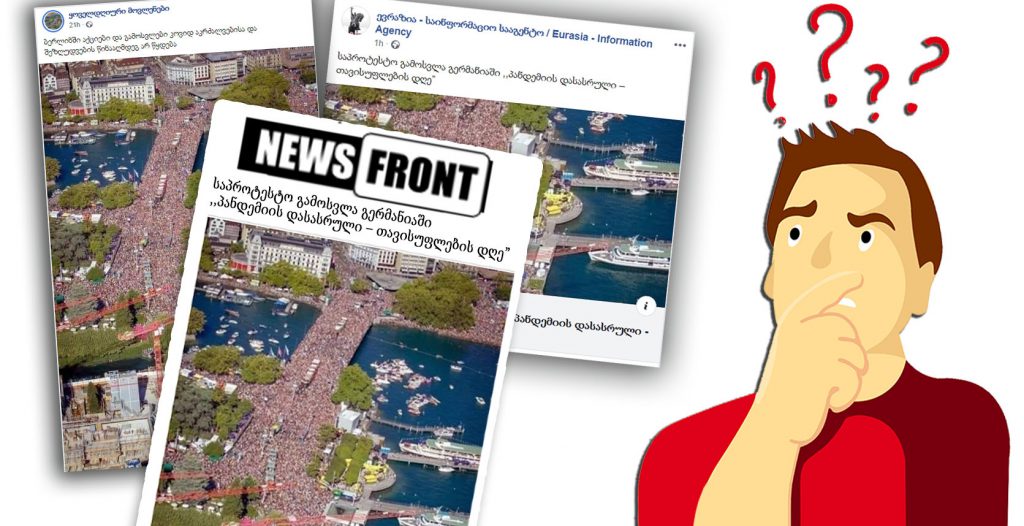 A Facebook page called „ყოველდღიური მოვლენები“ (“Everyday events”) published a photo on August 2 depicting a mass gathering. The photo comes with a caption: “Non-stop protests and manifestations against COVID prohibitions and restrictions in Berlin.” As of August 3, 12:00, the post had 283 shares and up to 600 reactions.

On August 3, a pro-Kremlin editions News front Georgia published an article, titled “Protests in Germany ‘The End of the Pandemic – The Day of Liberty’”, with an identical photo. The News Front article has been shared by another pro-Kremlin Facebook page “ევრაზია – საინფორმაციო სააგენტო / Eurasia – Information Agency”. 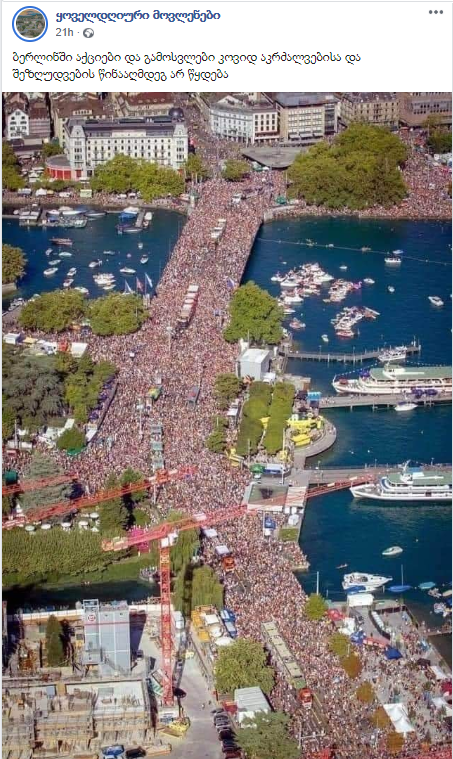 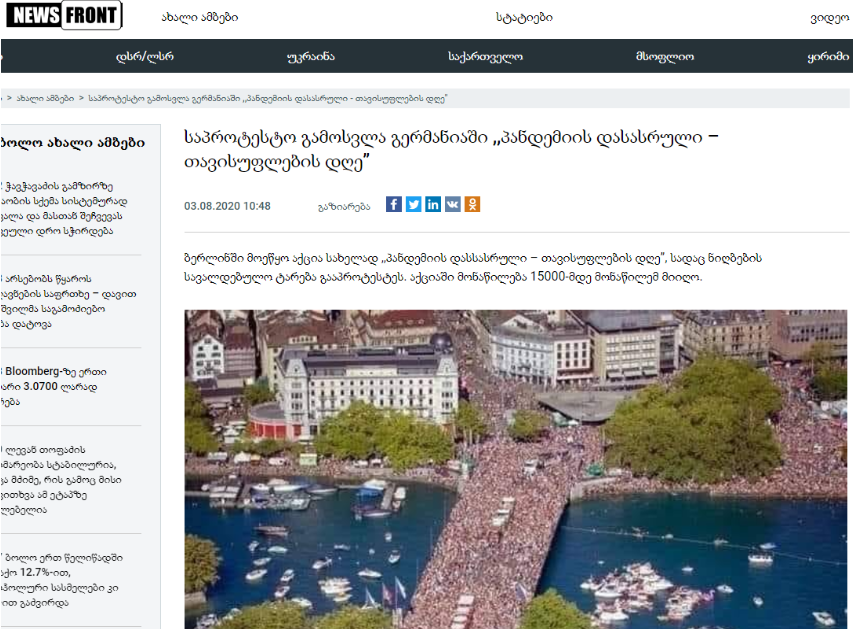 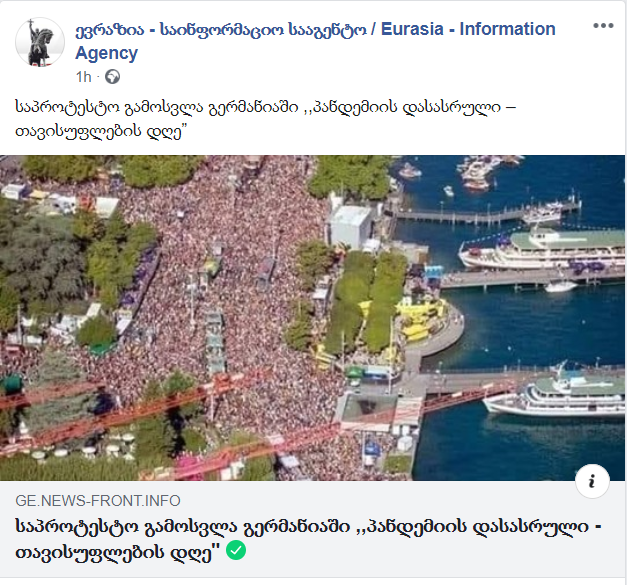 The photo disseminated by “Everyday events” is not connected to the Berlin events and actually shows a music festival that took place in Zurich in 2019. The information disseminated in relation to the rally against the COVID-19 restrictive measures is half true – it includes a manipulatively increased number of protesters and it has been analogously disseminated in foreign media.

Results of a TinEye image search show that the photo that the Facebook page “Everyday events” and the pro-Kremlin edition News Front published to allegedly show the Berlin protests can be traced back to as early as July 2019 and is not connected to Berlin at all.

Street Parade is an annual techno musical festival, attended by up to a million people, that takes place in Zurich, Switzerland. The attendees of the festival gathered at the Lake Zurich (Zürichsee) in July 2019. Hundreds of thousands of people attended the festival and the photo is showing exactly that festival. 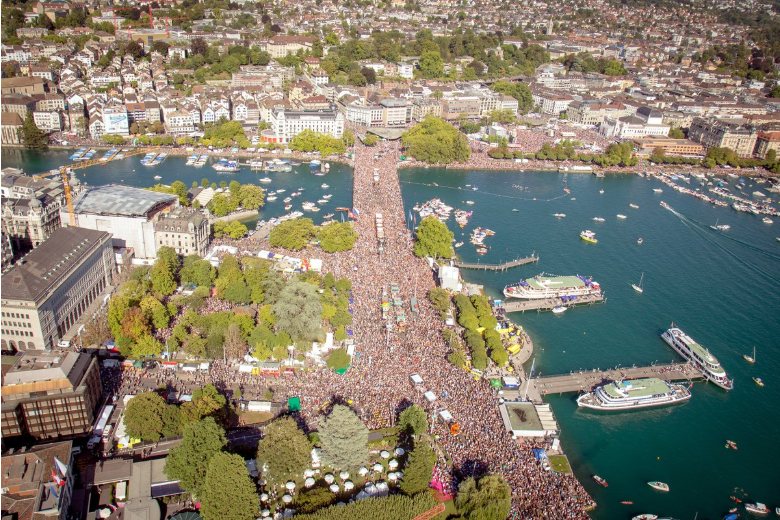 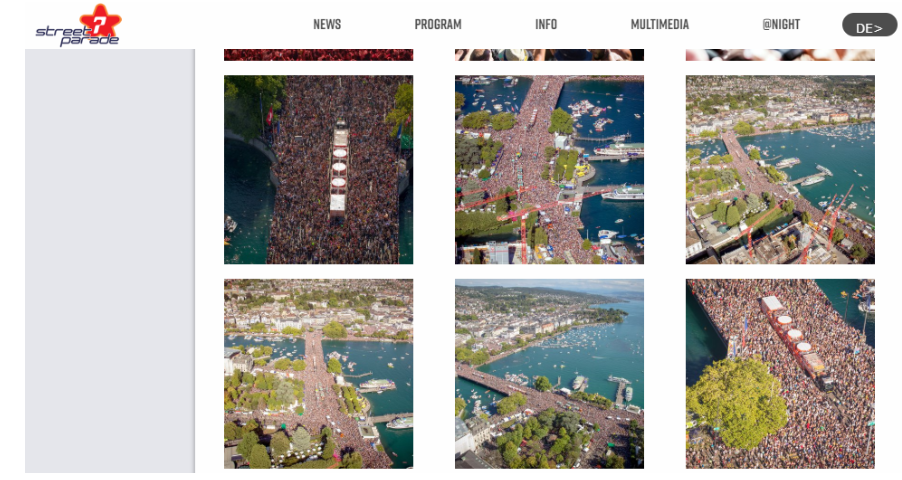 As Tagesschau reports, the August 1 protests in Berlin against the COVID-19 restrictions sparked criticism and discussion. Fake reports and manipulative photos have been shared on social media mentioning that 1.3 million people took part in the protests. Philip Kreißel, a data analyst, has documented 120 Facebook groups and profiles that disseminate similar manipulative information, including right-wing radicals and conspiracy theorists. Reporters and fact-checking organizations claim that the opposite is true – according to their calculations, the number presented by the police is more realistic and the protests were attended by approximately 12-20 thousand people.

The photos show that the protesters did not fill the June 17 Street in Berlin, between the Brandenburg Gate and the Victory Column. MapChecking tool provides for a possibility to calculate the number of people in a certain area. German journalists and fact-checkers, using this online tool, have calculated that even 20,000 is a very inflated number. Moreover, they compared the protests with 2001 Berlin Love Parade, attended by more than 1 million people that filled the June 17 Street, as well as the territory behind the Victory Column, adjacent streets, and parks. 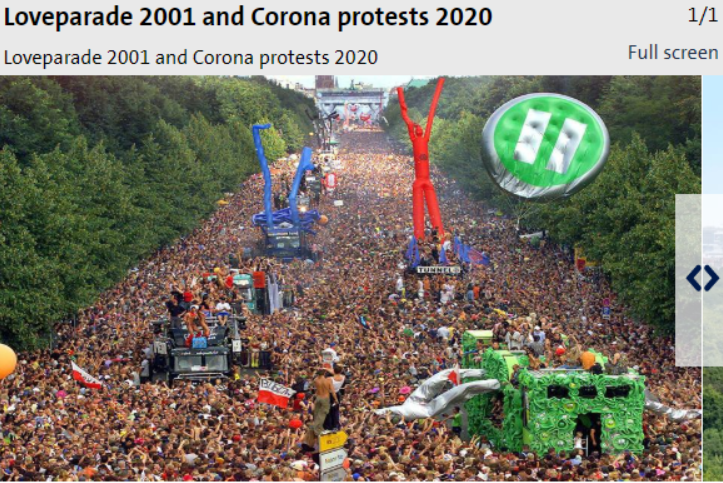 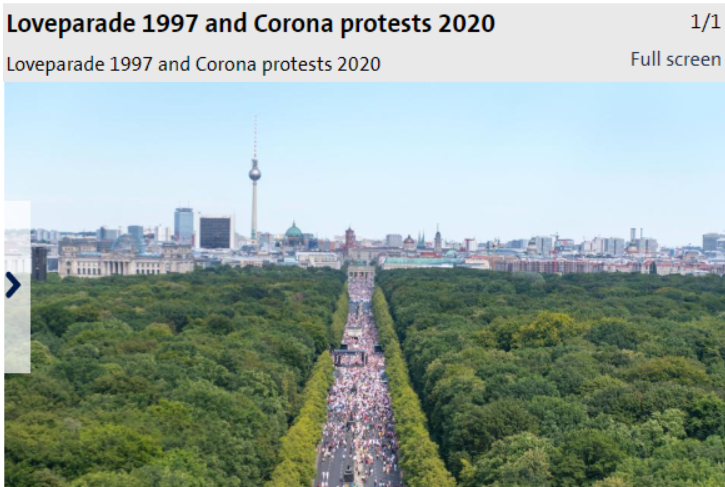 About the “Everyday events”

The page that disseminated the Zurich photo and attributed it to the Berlin protests was created on July 14, 2018. Last week, Myth Detector wrote about other photomanipulations disseminated by this page – concerning a TV report on Mtavari Arkhi. “Everyday events” had Mtavari Arkhi logo as a profile picture, however, after the publication of the article by Myth Detector, the photo has been changed to a Tbilisi landscape. 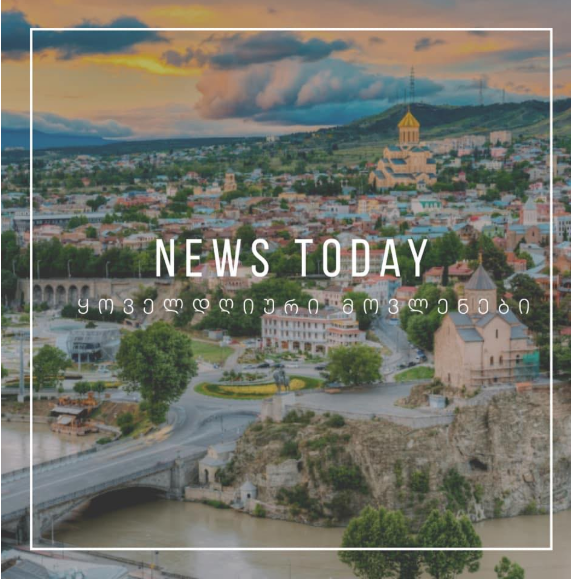 A Georgian-language website of pro-Kremlin media outlet News Front emerged on Georgian media market in October 2019. Until recently, News Front was spreading news in eight languages – Russian, German, English, Serbian, Spanish, French and Hungarian. In October, the Georgian language was added to the platform. News Front recognizes the independence of Ukrainian territories – Donbas, Luhansk and Crimea and its editorial policy is identical to the Kremlin’s agenda. The Editor-in-Chief of News Front is Shota Apkhaidze, the founder of Caucasus Center for Islamic Studies, who is managing the edition from Moscow, Russia. Facebook administration deleted the News Front Georgia and other pages in its network in April 2020.