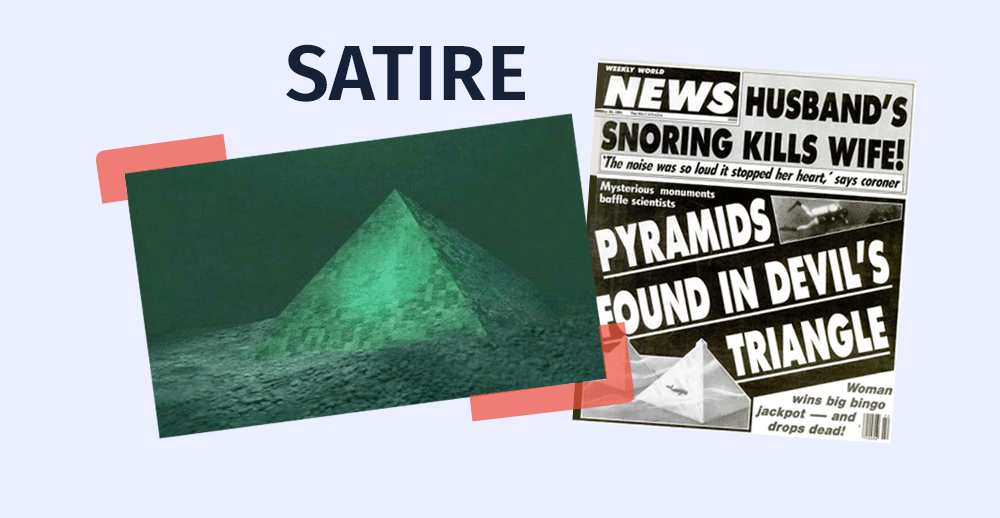 On May 18, 2021 clickbait webpage intermedia.ge published an article titled “Scientists Couldn’t Figure Out Anything about the Pyramids Discovered in the Bermuda Triangle”. According to the article, during the expedition in the 1970s, Charles Berlitz’s scientific team discovered mysterious 150 meters high glass pyramid on a seabed of the Bermuda Triangle. The article says that the pyramid is located in the center of the “Triangle” and it is precisely this pyramid that causes anomalies attributed to Bermuda Triangle, however, the U.S. government attempted to hide the information about this discovery. Intermedia.ge also notes that oceanographer Verlag Meyer discovered two other pyramids in the Bermuda Triangle in the 1990s. 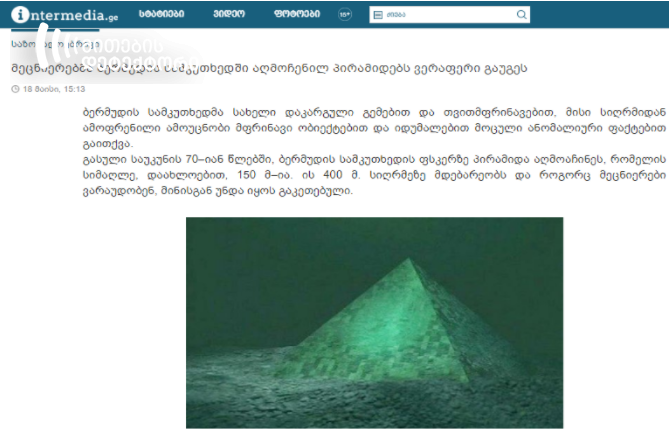 Information about the discovery of a mysterious pyramid at the bottom of the Bermuda Triangle is disinformation that has been circulating in various forms on online forums and clickbait webpages since 2012 and originates from the 1990 article of American satirical publication. There is no such evidence. Moreover, Charles Berlitz, mentioned in the intermedia.ge article, was actually American linguist and polyglot, whereas “famous oceanographer Verlag Meyer” was made up by the satirical publication.

A sensational story about the discovery of a pyramid at the bottom of the Bermuda Triangle was first printed in the May 1990 issue of American satirical publication The Weekly World News. Oceanographer Verlag Meyer, mentioned in the intermedia.ge’s article, first appeared in the article of satirical publication and such person doesn’t exist in reality. 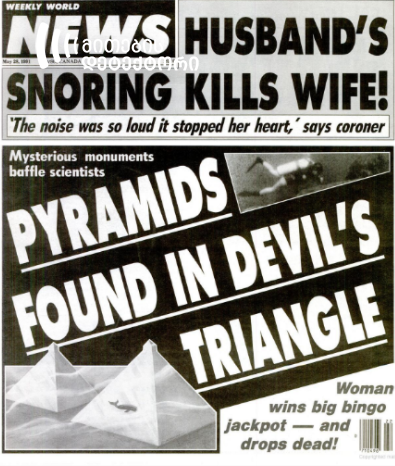 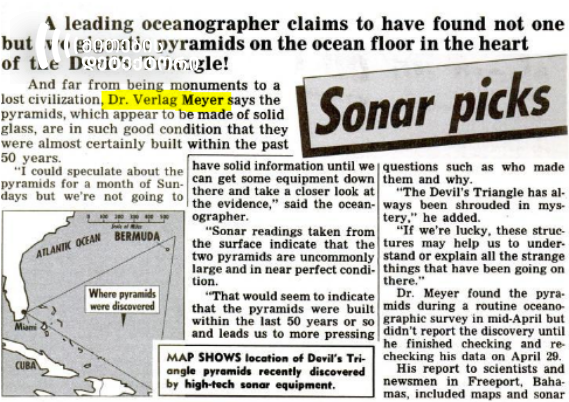 A fictional story by The Weekly World News appeared on various web-pages and blogs in 2012, however, it changed in time and in different articles, sometimes it was fictional oceanographer Verlag Meyer who discovered the pyramid, sometimes – “French-American scientific expedition”, and in some cases even a naturalist Ray Brown. According to one of the 2012 articles, Brown accidentally discovered pyramids near the Bahamas islands during scuba diving in 1968, however, he couldn’t explore the pyramid in detail due to lack of oxygen. Google search on Dr. Ray Brown shows several pages mentioning Ray Brown in the context of Bermuda Triangle pyramids, however, no information can be found on his scientific work in itself. Moreover, different articles provide different story-telling on the history of Ray Brown’s discovery of the Pyramids. In one of the versions of the story, Ray Brown took photos and videos of the mysterious pyramid but the storm destroyed his camera. Since Brown couldn’t manage to go back to take new photos of the pyramid, nothing more than his story about the “discovery” is left as evidence.

In the Georgian online sphere, one more satirical news from The Weekly World News has become a source of disinformation, according to which NASA scientists took photos of “God’s heaven” using the Hubble Space Telescope. Read more in the article of “Myth Detector:
“Report on “Heaven Above” turned out to be a satire”

Bermuda Triangle is an area in the North Atlantic Ocean marked by the Florida panhandle and Bermuda Archipelago and has been linked to the mysterious disappearance of ships and planes since the 19th century. However, according to the U.S National Oceanic and Atmospheric Administration, there is no evidence that mysterious disappearances of planes and ships occur with any greater frequency in the Bermuda Triangle than in any other large, well-traveled areas.