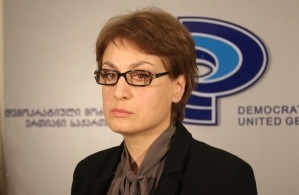 Public opinion research conducted by well-known international organizations is frequently subject to varied interpretations. Domestic political forces are infamous in this respect as their ratings are measured by the National Democratic Institute (NDI) and the International Republican Institute (IRI) in order to assist in the development of party institutions and political platforms centeredaround voters’ needs.

“You know what it is all about? We aspire to become part of Europe, don’t we? This is because we find most of the European values desirable. But, would any of the EU member states allow an organization or institution of a foreign country to conduct sociological surveys on its territory and manipulate in this manner? We do not claim that such a survey won’t help us. Off course, it will. However, it should not be politicized. It should definitely be objective.”

In reality, both NDI and IRI are operating in various EU member states. Moreover, international foundations are being created by EU and its individual member states to promote democracy.

In 1982, US President Ronald Reagan came up with the initiative in front of the British Parliament to assist the global democratic movement, which shortly resulted in the establishment of the National Endowment for Democracy (NED) by Congress. NED receives financing from the federal government, but is governed by an independent board of directors. It provides grants to non-governmental organizations to support democratic reforms and institutions in transitional democracies. NED is prohibited from directly funding political parties.

Most of the funding from NED goes to three private institutions created for this very purpose in 1983 – the National Democratic Institute for International Affairs (NDI) and the International Republican Institute (IRI) affiliated with two major political parties, and the Center for International Private Enterprise (CIPE) created by the business sector – and the regional international institute of labor movement known as the Solidarity Center (ACILS). The structure of NED’s financing is aimed at accommodating interests of major political players in US. However, these institutions also receive funding from other sources. NDI and IRI are being financially supported by dozens of governments, international organizations and private foundations.

The program priorities of NDI and IRI include assisting governments in the implementation of reforms, helping political parties in the improvement of organizational structures and voter outreach, supporting fair elections and the involvement of civil society groups in the political process. Initially, both of these institutes had only been operating in countries of Latin America. After the end of Cold War, they swept over the whole world and implemented democracy-assistance programs in more than 100 countries. IRI observed 204 elections in 54 countries, while NDI provided technical assistance to 720 political parties in 80 countries. Furthermore, NDI has been instrumental in the development and promotion of parallel vote tabulation. These institutes are currently operating in up to 90 countries together with local partners.

Public opinion research is an integral part of programs supported by NDI and IRI. Both of them are actively utilizing quantitative (surveys) and qualitative (focus-groups) methods of research. Public opinion surveys measure people’s attitudes towards important topics and political forces, while qualitative research studies underlying reasons of these attitudes. Such research aims to inform political leaders and civic activists about the needs and priorities of the public. Political parties can use the results of public opinion research to develop platforms focused on voters’ needs and design successful electoral strategies. Pre-election and exit polls also provide an additional mechanism against fraud. Nevertheless, such research rarely takes place in developing countries. Thus, one of the goals pursued by NDI and IRI in these countries is to make public opinion research a central element of political communication.

Democratic transformation of Central and Eastern European post-communist countries is a good example of the successful work undertaken by NDI and IRI. For instance, the large-scale IRI program in Slovakia relied upon systematic public opinion surveys and involved providing support to democratic forces in designing election strategies and creating coalitions, as well as implementing effective political campaigns. Eventually, pro-European democratic coalition won the 1998 Parliamentary elections with a landslide victory and helped the country to join NATO and EU. Similar democracy-assistance programs have been implemented in other countries of Central and Eastern Europe, which are currently EU members or candidate states: Poland, Romania, Bulgaria, Croatia, Serbia, Macedonia and Albania.

American experience in democracy promotion became a role model for other countries and international organizations. In 1992, UK established the Westminster Foundation for Democracy that is similarly financing private organizations affiliated with major political parties and mainly operates in Balkans within Europe. In 1998, Australian government created the Center for Democratic Institutions, which aims to support political systems in new democracies of Asia-Pacific region. After the establishment of UN Democracy Fund in 2005 and Arab Democracy Foundation in 2007, European Endowment for Democracy started to operate in 2013 under the Polish EU Presidency. On the other hand, US organizations working to promote democracy have been increasingly targeted by a number of authoritarian regimes. In 2015, NED was banned in Russia on the ground that it attempted to influence government decisions and threatened its constitutional order.