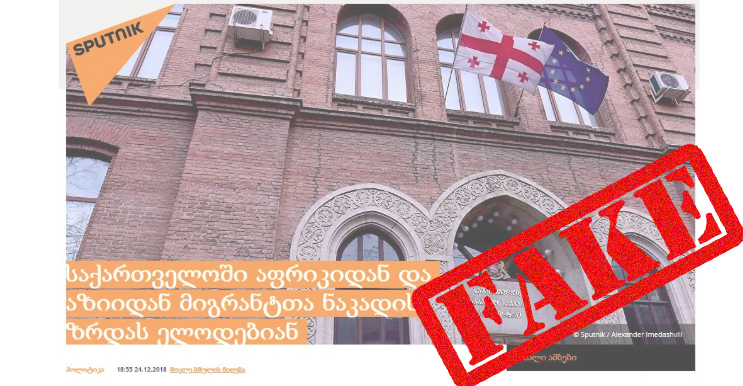 The campaign against the UN Compact for Migration launched by Irma Inashvili, leader of the pro-Russian Alliance of Patriots party, was continued by an online edition Sputnik Georgia. On December 24, 2018, it released an article headlined “Georgia expects increased flow of migrants from Africa and Asia.” The article focuses on Georgia’s support for the Global Compact for Migration, prepared under the auspices of the United Nations, as well as the rally held outside the Georgian Foreign Ministry on December 24 in protest of the decision. The article predicts assertively that the number of migrants will increase in Georgia and links this forecast to the Global Compact for Safe, Orderly and Regular Migration adopted by the United Nations. The article notes that the UN document envisages support for the countries receiving large numbers of migrants. 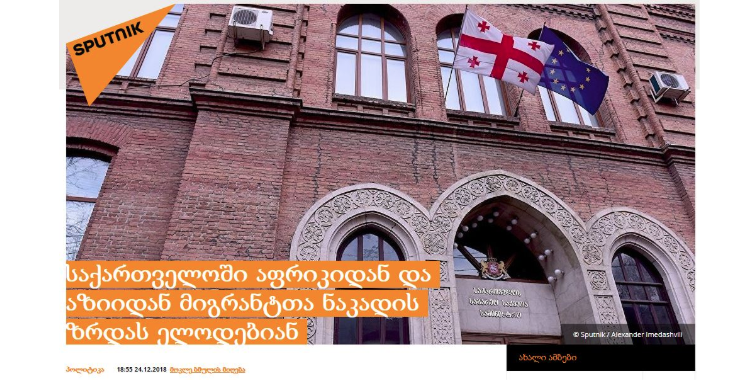 Sputnik Georgia’s article is manipulative and misleading, because its headline does not reflect the content of its article and is built on the opinions expressed by the leader of the pro-Russian Georgian Troupe party. The image depicting the Georgian Foreign Ministry used in the article creates an impression that the forecast represents the Ministry’s position. Therefore, it is misleading.

By manipulative use of the headline and the image, Sputnik Georgia is speculating about migration growth, trying to incite anti-migrant sentiments in the public.

The headline of the article “Georgia expects increased flow of migrants from Africa and Asia” is manipulative and does not comply with the content of the material. This opinion is promoted by the organizer of the rally, leader of pro-Russian Georgian Troupe party, Jondi Bagaturia.

In fact, the UN Compact for Migration does not involve any obligation for accepting large number of migrants. Moreover, the document does not impose any such obligation on any party. The Global Compact is built on several important principles, including national sovereignty, reaffirming the sovereign right of States to determine their national migration policy.

Although the article provides the comments by the Georgian Foreign Ministry, where any such obligation as well as the possibility of increased migration flow is denied and although the article notes in its background information that the UN Compact is a non-legally binding document, the headline predicts increased flow of migrants assertively that reflects the editorial policy.

The headline of the article, which predicts increased migration flow, is accompanied by the image of the Georgian Foreign Ministry that creates an impression that the opinion expressed in the headline, as if Georgia expects increased migration flow from Africa and Asia, represents the Ministry’s position. The article also offers the comments by the Foreign Ministry representative, providing an absolutely different position and emphasizing that “the document does not impose any obligation on accepting migrants.” Thus, the image is misleading.

4. Similar disinformation about the UN Compact

Sputnik Georgia’s claims as if Georgia expects increased migration flow are echoing the remarks made by Irma Inashvili, leader of the Alliance of Patriots party, on December 12. Inashvili claimed that the Global Compact for Migration obliges Georgia to accept migrants.

About the UN Compact

The United Nations General Assembly officially endorsed the Global Compact for Safe, Orderly and Regular Migration on December 19. 152 countries, including Georgia, voted in favor. The Compact provides a strong platform for cooperation on migration, drawing on best practice and international law.

According to MDF`s 2017 report on “Coverage of Muslim-related topics in Georgian, Russian, Azerbaijani and Turkish traditional and new media” At the first glance, the Georgian-language edition of Sputnik seems to use a neutral style of reporting, but by manipulating facts and photos it speculates on the topic of migrants. In contrast to other Russia media outlets and Georgian fringe media, journalists of Sputnik-Georgia did not make xenophobic comments themselves, but they created a xenophobic context through background information, interpretation of data, manipulative photos and titles.