Sputnik’s Manipulation on the TV License of BBC 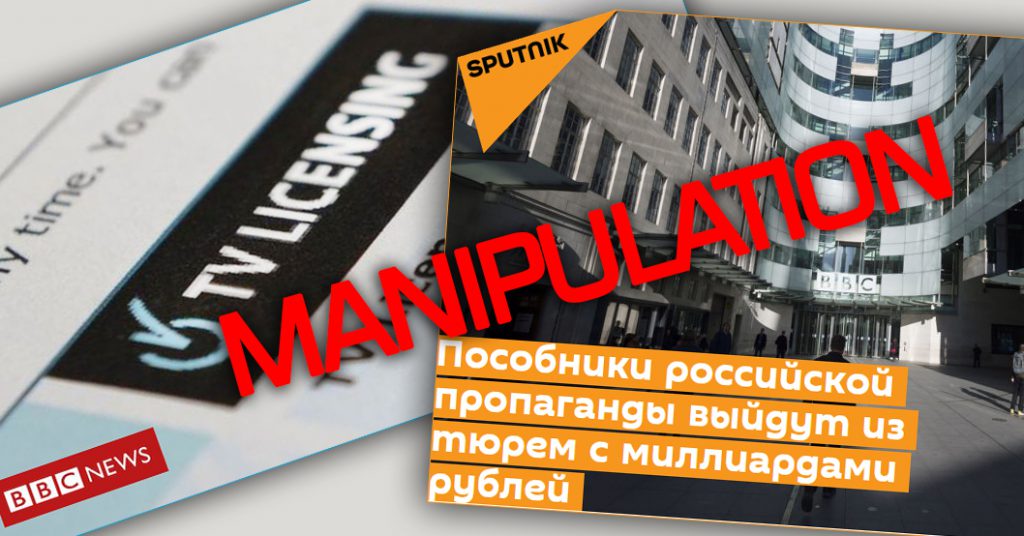 On February 1, sputnik-ossetia.ru published an analytical article by Viktor Marakhovsky titled “Associates of Russian Propaganda will Leave Jail with Billions of Rubles” (“Пособники российской пропаганды выйдут из тюрем с миллиардами рублей”). Marakhovsky talks about the British Broadcasting Corporation (BBC) and notes that those citizens of the United Kingdom that evade the tax, necessary for sustaining BBC, are tried and even imprisoned.

Sputnik-ossetia: “BBC is sustained through taxpayers’ money… Every year, approximately 130,000 people are tried for evading the BBC tax. Some of them are actually put in jail. No, this is not our fake pro-Kremlin propaganda. This is the truth. Each year, thousands of Britons are imprisoned simply because they do not pay the tax that aims to sustain the BBC.”

Sputnik reports the facts in a manipulative manner and showcases them as if the Britons are tried for refusing to pay for sustaining the BBC. In fact, TV license is a tax, laid down in the British Law and not paying it is considered a tax evasion, with maximum punishment being £1,000, with imprisonment used as a punishment only in extreme cases, when the offender refuses to pay the fine.

What is the TV license?

Each UK household or company that uses television (antenna connection, satellite, cable, internet) is obliged to purchase the TV license. The same obligation covers those customers that watch BBC programs via iPlayer. The annual cost of the license is £154.50.

There are free and discounted licenses available as well:

What are the consequences of using TV without a license?

Since 2006, the TV license tax has been considered a state tax, meaning not paying it equals the tax evasion.

Customers who watch TV without license may be fined up to £1,000. Imprisonment is not foreseen as one of the ways of punishment, however, the offender may be imprisoned in case of not paying the fine, set by the court. As an official representative of BBC TV licensing explains, the company only pursues criminal prosecution in very extreme cases, when all other means have been used. In case of new offenders, the cases do not even reach the court, provided they pay on time.