“Sputnik Ossetia” Claims the Georgian King was of Iranian Descent 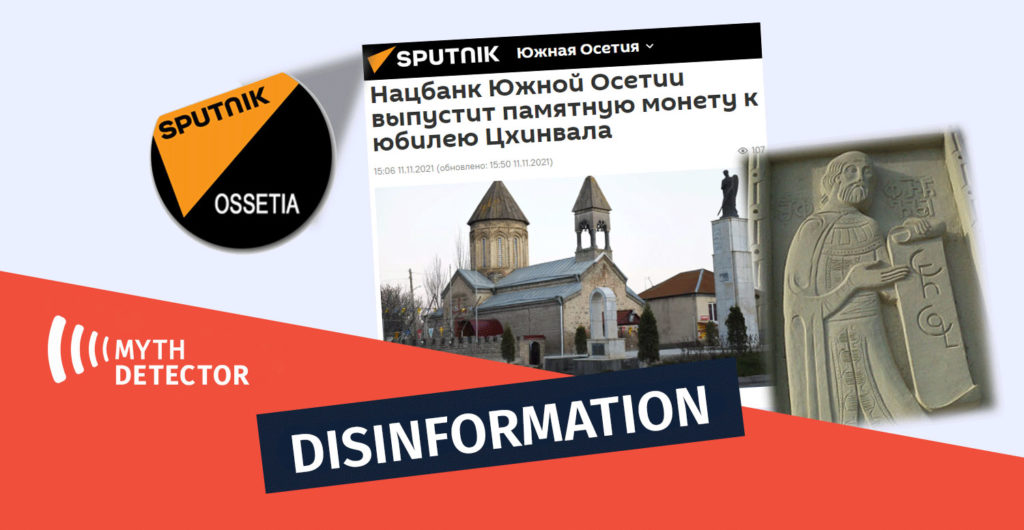 On November 11th, 2021, the online publication “Sputnik Ossetia” published an article regarding the coin issued by the National Bank of so-called South Ossetia on the 1760th anniversary of the founding of Tskhinvali. The article asserted that the city of Tskhinvali was founded around 262-265 by King Aspagur, a descendent of the Iranian dynasty:

Sputnik Ossetia: “An important date – the 1760th anniversary of the founding of the capital of South Ossetia – will be celebrated in the Republic in 2022. According to historical records, Tskhinvali was founded around 262-265 by King Aspagur, a descent of the Iranian dynasty. 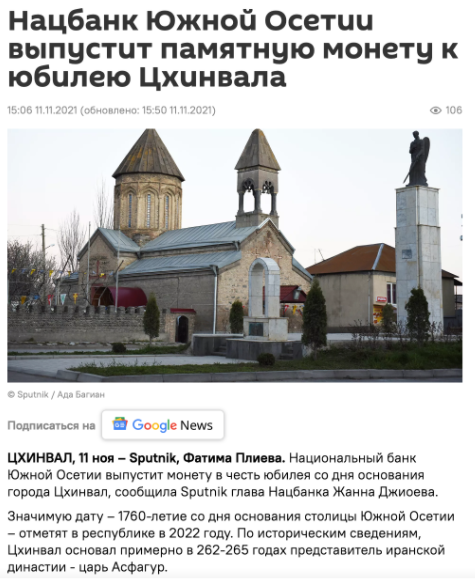 The part of Sputnik Ossetia’s article concerning King Aspagur is false, as Aspagur was the descendent of the Georgian dynasty of Parnavazids.

The Parnavazid dynasty was founded at the end of the IV century BC, and from this period, its representatives served as the heads of the Kingdom of Kartli (Iberia). The first king of Kartli, Parnavaz I, is considered to be the founder of the Parnavazids. Accordingly, the name of the dynasty is derived from his name.

Although marriages between the kings of Kartli and the Achaemenid and later Sasanian royal families of Iran were frequent, the Parnavazid royal dynasty is still considered Georgian. This fact is omitted in the article by Sputnik Ossetia to cover the Georgian trace. 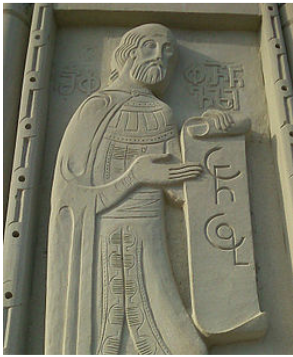 King Parnavaz himself, according to the “The Georgian Chronicles,” was from Kartli and belonged to one of the noble families of Mtskheta. His uncle Samara was the governor of Kartli, and his mother was a Persian woman. Parnavaz is also credited for introducing the Georgian script.

The Georgian Chronicles: “At that time, there lived in Mtskheta one youth by the name of Parnavaz. This Parnavaz was a Kartlian by birth, a kinsman of Uplos, son of Mtskhetos, and on his mother’s side – a Persian from Isfahan. He was the son of Samar’s brother, the same Samar, who at the time of Alexander’s coming to Kartli was the mamasakhlisi of Mtskheta.”

King Aspagur was the last Parnavazid king of Kartli. Since he had no heir, his daughter Abeshuru married Mirian, the 7-year-old son of Khosrov, king of Persia. The latter later became the first Khosrovid king of Kartli and started the Khosrovid dynasty.

The Georgian Chronicles: “They brought from Samshvilde King Aspagur’s daughter by name of Abeshuru. The King of the Persians married her to his son, who was then a boy of seven years of age.”

King Aspagur is considered to be the founder of Tskhinvali. He also built the city of Ujarma. Noteworthy, during his reign, he mainly fought the Persians together with the king of Armenia. In the last years of his reign, the Persians invaded Kartli, and Aspagur was forced to flee to Ossetia, where he died.

The Georgian Chronicles: “After Mirdat’, his son Aspagur reigned. Aspagur built the city-fortress Ujarma. After Alexander’s invasion all the kings who reigned in Kartli were idol worshipers. Aspagur was the last king, who was a descendant of the Parnavazids. At that time the King of Persia was Khosrov Anushrivan Sassanid, known by the name of Ardashir, who destroyed the Ajgalanid kings, or so it is written in the history of the Persians.”