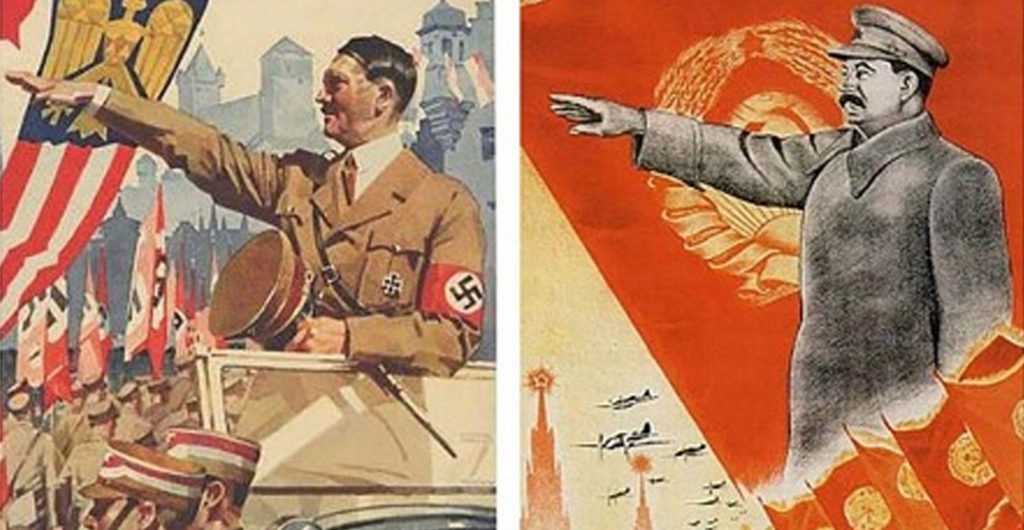 On September 8, 2016, an article by Iza Tamazashvili was published on Georgia and World website, in which she states:

“Where was the West during the Great Patriotic War, when the United States and England were funding Hitler, whereas the Western countries were suffering under the domination of Fascist Germany? Was not it Stalin, who saved the world from this plague?”

The disinformation on an exaggerated role of Stalin in the Second World War starts from the Soviet period and continues until today in the Russian and Georgian media.

WWII started on September 1, 1939, following a treaty signed on 23 August between the USSR and Germany that gave Hitler a non-aggression guarantee and paved way for his intervention to Poland.

The Soviet Union, as an ally of Nazi Germany, intervened in WWII on September 17, 1939, when the first fire was opened in Eastern Poland. Red Army occupied the territory of Poland that, according to Molotov-Ribbentrop Pact, belonged to the sphere of influence of the Soviet Union. Occupation of Baltic States and Romanian Bessarabia were also parts of the military campaign that proves that WWII did not start in 1941 for the Soviet Union.

Myth N 2: USSR was always a victim of German aggression and an enemy of Germany

After defeating Germany in World War 1, the goal of Britain and France was to decrease Germany’s military potential to the minimum and strengthen new independent countries, including Poland and Czechoslovakia. Both USSR and Germany were equally unhappy with such a condition. In 1922-1933, Germany was not a Nazi state yet, however, Germany started to rebuild its army through economic cooperation with the Soviet Union. Training centers were opened by the Soviet Union for training the German military personnel. The participants of the trainings conducted by the USSR’s later became military commanders of the Third Reich.

The occupation of Ruhr region in 1923 triggered resistance among German opposition. The Soviet Union hoped that the people’s resistance would turn into a communist revolution. To this end, the USSR appealed the Communist Party of Germany for cooperation and collaboration with right-wing extremists.

Despite a seeming ideological confrontation between Nazism and Communism following Hitler’s coming into power, both Hitler and Stalin had a single interest – distort Versaille-Washington system. After the occupation of Czechoslovakia by Hitler in 1939, negotiations were opened between Germany and the USSR that ended with the non-aggression pact, known as Molotov-Ribbentrop Pact, on August 23 of the same year. The agreement included a secret pact that included a distribution of the spheres of influence in the Eastern Europe between Hitler and Stalin. Molotov-Ribbentrop Pact was exactly the mechanism that caused a new world war.

Myth N 3: Molotov-Ribbentrop Pact was a mandatory step for the USSR and Stalin only wanted peace

On August 19, 1939, during the Politburo meeting of the Communist Party, Stalin stated:

“We are absolutely convinced that if we conclude a mutual assistance pact with France and Great Britain, Germany will back off from Poland and seek a modus vivendi with the Western Powers. War would be avoided, but further events could prove dangerous for the USSR. Our choice is clear. We must accept the German proposal and, with a refusal, politely send the Anglo-French mission home. It is not difficult to envisage the importance which we would obtain in this way of proceeding. It is obvious, for us, that Poland will be destroyed even before England and France are able to come to her assistance. In this case Germany will cede to us a part of Poland… Our immediate advantage will be to take Poland all the way to the gates of Warsaw, as well as Ukrainian Galicia. Germany grants us full freedom of action in the Pribaltic/three Baltic States and recognizes our claim on Bessarabia. She is prepared to acknowledge our interests in Romania Bulgaria and Hungary… Therefore, our goal is that Germany should carry out the war as long as possible so that England and France grow weary and become exhausted to such a degree that they are no longer in a position to put down a Sovietized Germany. Our position is this. Maintaining neutrality and waiting for the right time, the USSR will presently assist Germany economically and supply her with raw materials and provisions. It goes without saying that our assistance should not exceed a certain limit; we must not send so much as to weaken our economy or the power of our army.”

Stalin himself was interested in forming a non-aggression pact with Germany, as he perceived it as the best mechanism for increasing influence in Eastern Europe. The Soviet Union was hiding the secret agreement within Molotov-Ribbentrop Pact until the end of 1980’ies.

Myth N 4: Stalin became victorious in the World War II without the help of the West

The Soviet army saw significant losses in the first weeks of German attack. The army was leaving military equipment at the scene of war. Divisions were retreating from the front line by hundreds of kilometers. The USA allocated $50.1 billion of military aid to the allies, including the USSR (see Table 1).

Table 1. Financial and material assistance allocated by the U.S to the allies, 1941-1945

Locomotives transferred by the USA to the Soviet Union were 2.4 times higher than the USSR’s capacity to produce them, whilst wagons exceeded the given amount 10.2 times. Food transferred to the Soviet Union in the framework of the Lend-Lease policy was enough to sustain a 10-million army for 1,688 days. The Lend-Lease program played a significant role in the victory of the allies.

Military campaigns of Britain and the USA substantially weakened Hitler on the Eastern Front. In 1943, while Germany was attacking Kursk, the allies placed their troops on Sicily, so Hitler cancelled the offensive on the Eastern Front. If not the allies’ campaigns in Britain, the Atlantic Ocean, Northern Africa and Normandy, Germany’s odds against the Soviet army, weakened by generals’ repressions and improper military equipment, would have been much higher.

Myth N 5: The Red Army has not committed war crimes

Eastern Prussia, Silesia, Pomerania and Danzig were the first German settlements which the Soviet army entered. Rape, looting, child killing became an entertainment for the Soviet soldiers. It is widely known that the Soviet tanks attacked fled German IDPs. According to the German Federal Archive, 120,000 civilians were killed by the USSR in German villages, while 381, 000 German military died in concentration camps and prisons. 250,000 people died during the USSR-organized deportations. Soviet propaganda was to blame for these atrocities. A famous propagandist – Ilya Erenburg was calling the Soviet army to kill each and every German and to destroy Germany.

The same held for the Eastern European countries. Mass rapes also took place in the Baltic States and Ukraine. NKVD employees executed Polish army officers near Katyn. Germany publicly announced finding of mass graves in 1943. The USSR was blaming Nazis of executing the officers and was not claiming responsibility for the crime until 1990.

The first act of capitulation of Germany was signed on May 7 with the presence of Dwight Eisenhower. From the Soviet Union, the documents was signed by general Susloparov, however, he did not receive authorization of the signature from the Soviet government on time. Stalin sent instructions to Susloparov later, in which he was refusing to sign the capitulation document. When Stalin became aware that the document was already in force, he prepared a separate document of capitulation of Germany. The second act was held in Berlin, on May 9, however, as this document was identical with the first and was already recognized by the United States and Britain, the end of the World War 2 is acknowledged to be May 7. May 9 became a symbol of victory in the Great Patriotic War for the Soviet Union.

In Europe, May 8 became the Victory Day over Nazism, however, the World War 2 did not end with this. After May 8, 1945, military actions were ongoing in Japan and Southern Philippines. In Europe, the last important battle took place on May 14-15 on the territory of Yugoslavia.