Sova.news of Georgia was Blocked in Russia by Roskomnadzor for “missing” 2 Words 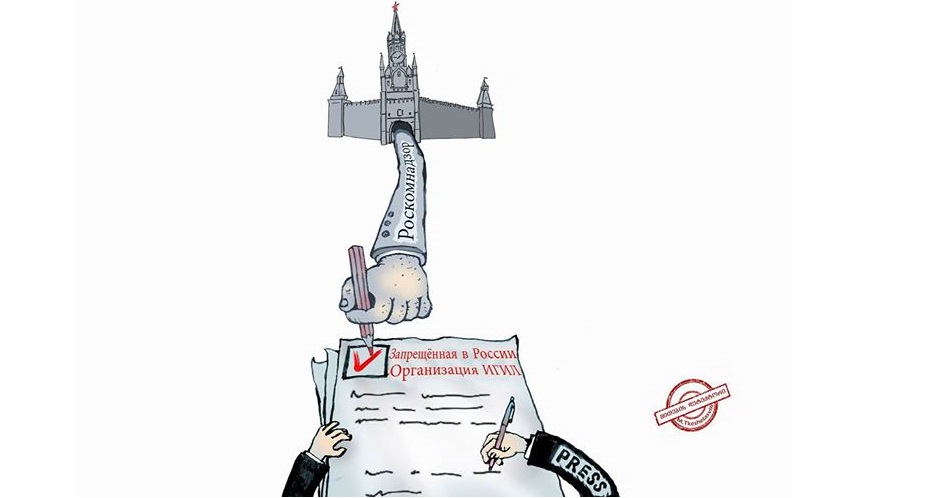 On September 6, 2017, a Russian-language edition Sova.news, registered in Georgia, was banned on the territory of Russia based on the decision of the Prosecutor General of Russia. According to the edition, the reason for the block was the article titled “Военный министр ИГ Тархан Батирашвили оставил завещание моджахедам” (Military Minister of the Islamic State, Tarkhan Batirashvili, Left a Will to Mujahedeen).

According to the Article 4 of the Law of Russian Federation on Mass Information Means, media outlets are required to obey the following rules:

The reason behind the ban of Sova.news is this particular law, namely, Roskomnadzor argues that the edition registered in Georgia did not indicate in its material before the so-called Islamic State that it is “an organization banned in Russia”. Even though the webpage of Sova.news was fully blocked on the territory of Russia, Roskomnadzor’s webpage indicated that the restriction only concerned the article, not the entire edition. It was unclear for the editorial board of Sova.news, why the Law of Russia concerned them, as the edition is registered in Georgia. Moreover, the ban on the access from the territory of Russia due to the article took place in violation of the Law of Russia, according to which, the Prosecutor’s Office is obliged to send a warning letter to the editorial board prior to blocking/ceasing activities of the media outlet. Sova.news received no preliminary warning.

Aiming to make a comeback to the Russian market, the editorial board deleted the article and addressed Roskomnadzor in a written form with the request to remove Sova.news from the so-called blocklist. After a two-week restriction, Roskomnadzor renewed the access to Sova.news on the territory of Russia. In addition, Sova.news editorial board decided to compromise to the Law of Russia and stated that henceforth, while mentioning the so-called “Islamic State”, it will mention that it is an organization banned in Russia.

Sova.news: “Considering the existing situation, Sova’s editorial board compromises and is ready to use the formulation “an organization banned on the territory of Russia” in the articles about the Islamic State. This is despite the fact that the activity of the terrorist organization is banned on the territory of any country, including Georgia, where our media outlet is registered.”

The usage of law in order to regulate the media content has taken place in relation to the TV Dozhd as well, when on July 5, 2016, the “Anti-Maidan” movement addressed the Prosecutor’s Office of Russia with a complaint against the TV channel. As “Anti-Maidan” explained, Dozhd was violating the Federal Law on Extremist Activities by not mentioning “an organization banned in Russia” while referring to the so-called Islamic State in up to 32 materials. Several authoritative international organizations criticize the content-wise regulation of the coverage of extremist activities and the dissemination of the extremist materials in the Russian Federation.

According to Human Rights Watch’s assessment, the Government of Russia uses the regulations on “extremism” for political purposes. In 2014-2016, 85% of “extremist expression” accusations concerned online expression and the responsibility included both fees and community service, as well as imprisonment. As HRW mentions, in the period between September 2015 and February 2017, the number of imprisonments due to “extremist expression” rose from 54 to 94. For instance, in December 2015, a blogger from Tomsk was sentenced to five years in prison specifically due to “extremism”. He openly criticized Russia’s intervention to Ukraine on Youtube and social media. Next year, another blogger was sentenced to 2.5 years in prison on the “public justification of terrorism” grounds, after he criticized Russia’s military involvement in Syria.

According to the assessment by Reporters Without Borders (RWB), pressure on independent media, blockings of webpages and draconic laws significantly increased since Vladimir Putin’s comeback in Kremlin in 2012. Leading independent information editions either ended up under control of the Government, or were closed down.