“Shameless People”, “Great Are You Lord”, “Nari Mani” and Others against Rioni Gorge Defenders 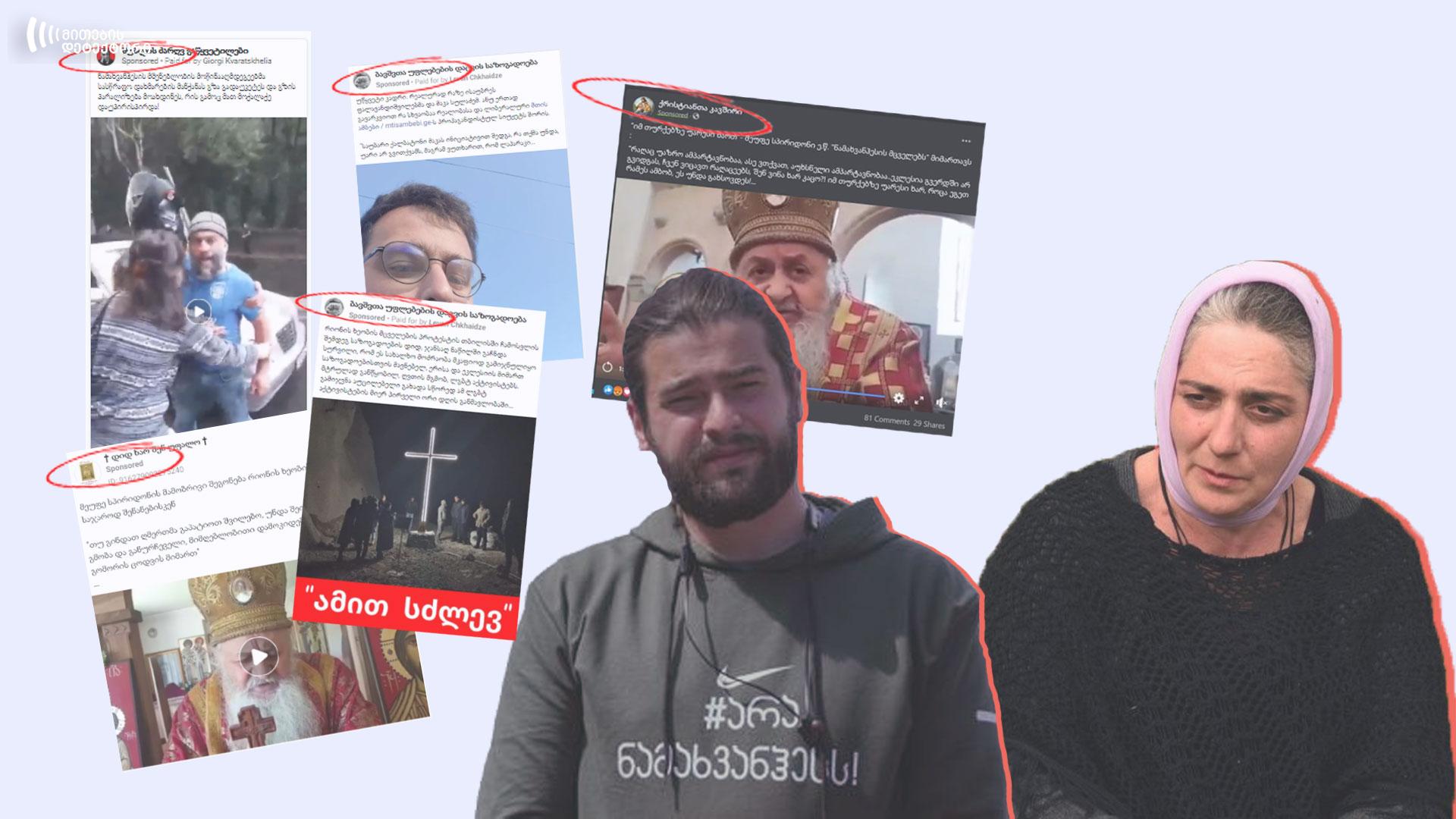 Within the process of monitoring, Myth Detector identified pro-government Facebook pages, as well as the pages created for discrediting anti-Namakhvani protests and the far-right actors spreading various messages against protesters. In addition, two pages affiliated with the opposition National Movement party also published the posts against the rally. 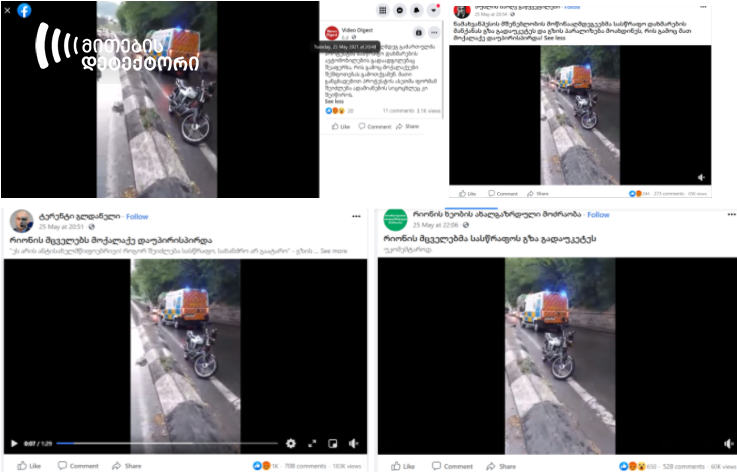 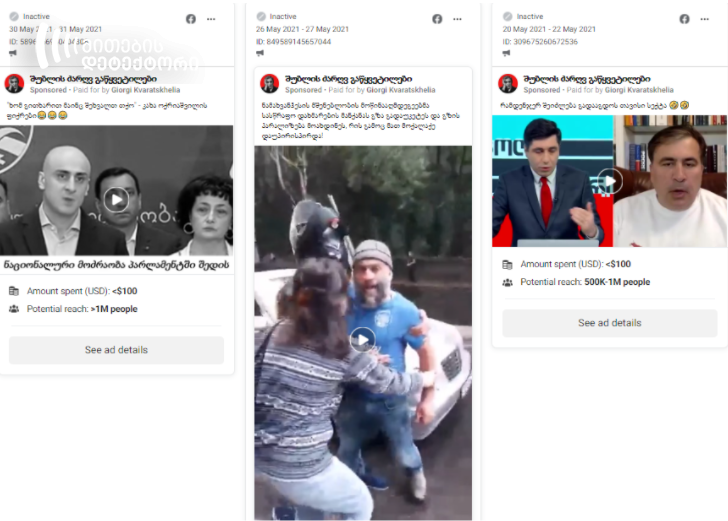 The page Video Digest used to upload TV stories or fragments from these stories prepared by various Georgian TV channels, mainly Imedi TV. On May 25, it spread the video footage showing the emergency vehicle.

The May 24 remarks by Varlam Goletiani about marking the Independence Day on May 26 triggered strong outcry. Goletiani called on the population to join anti-Namakhavi protests on May 26 instead of attending a solemn parade marking the Independence Day. He also noted that the protest wave would move towards Freedom Square.
On May 25, Goletiani clarified that nobody intended to thwart the event and that his remarks meant something quite different. 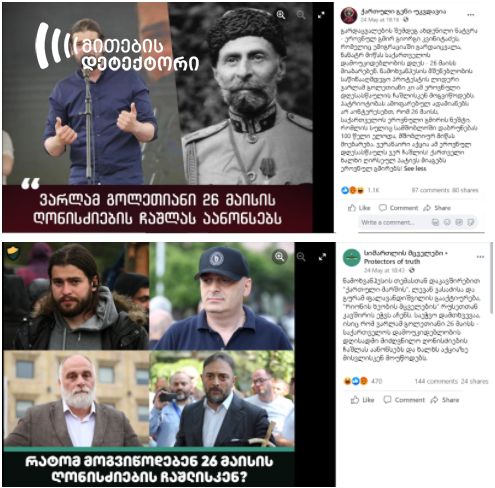 Facebook page “Georgian Gene is Immortal” was created on January 8, 2020 and it frequently publishes posts about Georgian historical figures, as well as the posts about modern political developments, which are frequently sponsored by the Facebook page. For example, one of the posts sponsored by the Facebook page claims that David Gareji Monastery Complex had been sold by the National Movement. Another post covers the issue of conferring the rank of Chevalier de la Légion d’honneur to the ruling party founder, Bidzina Ivanishvili and portrays Prime Minister Irakli Garibashvili as a fighter for the state interests that makes it clear that this page is government-affiliated. 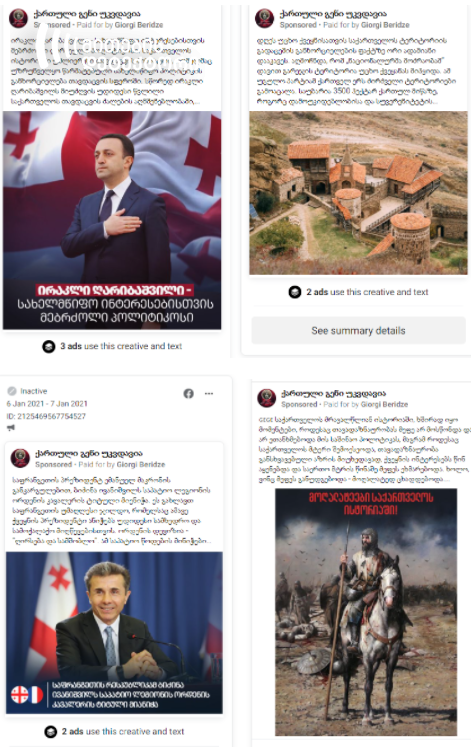 Facebook page “Protectors of Truth” was created on April 27, 2021 and it publishes posts targeting anti-Namakhvani protesters. Myth Detector wrote about this page earlier.

Besides Facebook pages, pro-government political analyst, Irakli Lataria also responded to Goletiani’s May 26 remarks. He noted that even the National Movement did not dare to thwart the May 26 events and that this move by the protesters point at their destructive nature. Lataria’s post was later published by gtmedia.ge. Commenting on the May 26 developments, Georgian expert Amiran Salukvadze stressed that a funeral ceremony for Georgia’s national hero, Giorgi Kvinitadze was being held at the Holy Trinity Cathedral, adding that “the nation should have a different agenda for a couple of days.”

Speaking about anti-Namakhvani HPP protesters on May 30, Archbishop Ioane of the Kutaisi-​Gaenati Eparchy said that they were biased. He also noted that Georgian Economy Minister Natia Turnava’s decision to leave the meeting in Kutaisi should not have become the reason for “overturning the table”, while the agreement with the company implementing the Namakhvani HPP project should be revised. Facebook page “Union of Christians” also posted this statement by Archbishop Ioane. 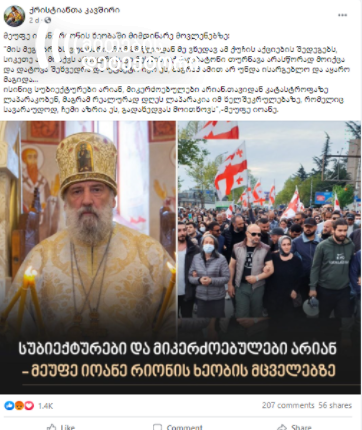 The page “Union of Christians” was created on August 2020 and it mainly publishes religious posts, such as congratulations on Orthodox holidays and Patriarch Ilia II’s quotes. On May 5, the page published a photo and a video discrediting anti-Namakhvani protesters. Both involved services held by Bishop Spiridon where he addresses protesters and claims that they are arrogant and “worse than the Turks.” The page has sponsored Bishop Spiridon’s video.

Besides religious and discrediting posts, “Union of Christians” uploaded the photo of Giorgi Rurua, a shareholder of pro-opposition Mtavari Arkhi TV, following his release from prison on April 27, and congratulated “all Orthodox Christians” on his release. The page had sponsored the post. But currently, the post is no longer available on the page. 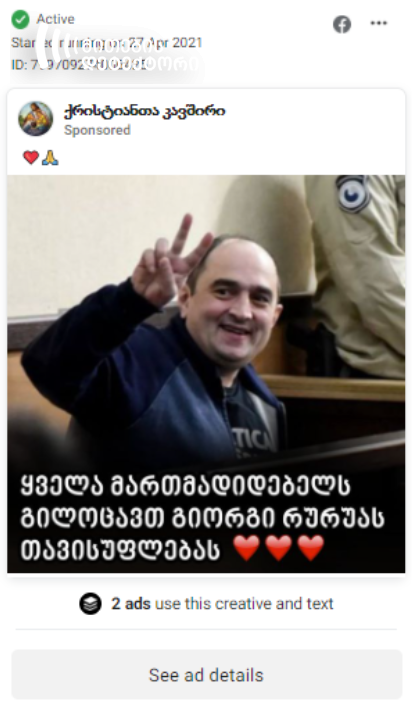 The church and far-right radical groups strongly criticized Maka Suladze, one of the leaders of anti-Namakhvani HPP protests, who decided to remove her big cross during the Tbilisi rallies as a sign of respect towards the representatives of other confessions. Suladze made this statement after Guram Palavandishvili and Aleksandre Palavandishvili of the Society for Children’s Rights expelled civic activists, Salome Barker and Zuka Berdzenishvili from the rally for wearing an LGBT+ armband.

Spiridon of Skhalta slammed Maka Suladze’s statement as blasphemy and called on her for repentance due to her support for “Sodom and Gomorrah’s sins.” Facebook page “Great Are You Lord” uploaded Spiridon’s sermon on May 30. The page was created in 2015. The video showing Bishop Spiridon’s sermon is the only post sponsored by the page so far. 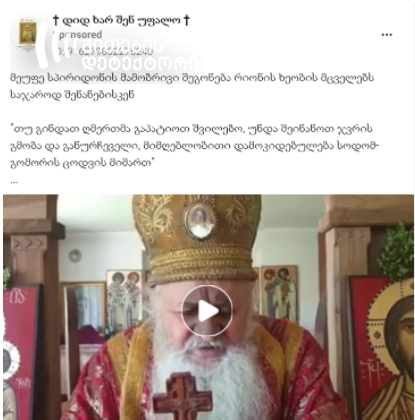 Facebook page “მოძრაობა ძლევაი საკვირველი” notes in its ‘About us’ section that it is an international union of emigrants. The same page also owns the website xorumi.ge.

Bishop Spiridon’s sermon has also been posted on the following pages: თურქეთი ოკუპანტია (Turkey is an occupier) and Zneoba.ge affiliated with Guram and Aleksandre Palavandishvili.

Dimitri Lortkipanidze, head of the Primakov Russian-Georgian Public Center: “What she [Maka Suladze] did was an absolutely inadmissible act for believers. Religious people should not do it. It was a sacrilegious act and we went there today to explain her that she should not have done it and if she still did it, let her come out and repent publicly.”

Suladze was also criticized by Alt-Info hosts: Shota Martinenko said that anybody who feels insulted when seeing the cross should not utter a word.

Facebook page “Turkey is an occupier” also slammed Maka Suladze’s remarks as a  sacrilege, referring to Davit Lortkipanidze’s post as the source. 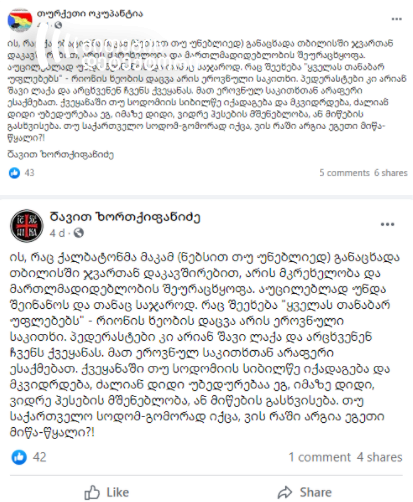 The Facebook page of the Society for Children’s Rights established by Guram Palavandishvili published two posts related to Maka Suladze. In the first post, Guram and Aleksandre Palavandishvili write that the protesters have distanced themselves from the cross “to win the hearts of LGBT activists” and now they should repent such behavior. 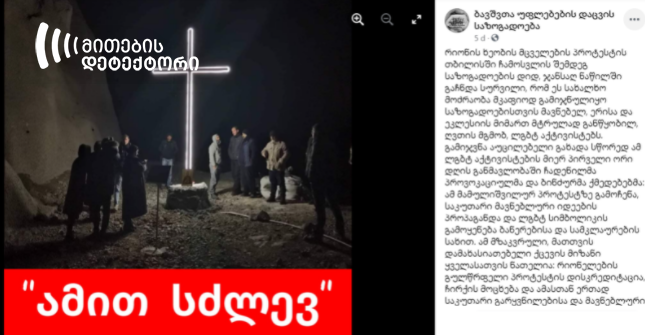 The second post responds to the video uploaded by “Mtis Ambebi” on May 27. In the video, Maka Suladze reminds Guram Palavandishvili and his son, Aleksandre of Christianity and slams them for expelling people from the rally for wearing an LGBT armband. A caption to the video spread by the Society for Children’s Rights notes that “liberal Mtis Ambebi” provided fragmental coverage of the story. In a 13-minute video, Guram and Aleksandre Palavandishvili are criticizing Maka Suladze for violating the principles of Christianity, stressing that they will not stand beside LGBT activists.

Both posts spread by the Facebook page of the Society for Children’s Rights are sponsored. 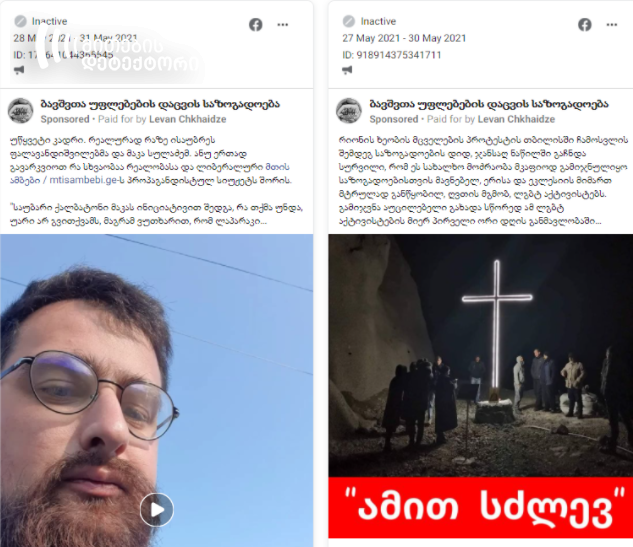 Antiliberal blogger Davit Nemsadze expressed support to Guram Palavandishvili. He dubbed the processes as “staged by the National Movement” and vowed to publish the footage depicting a conspiratorial meeting between Varlam Goletiani and an activist from the National Movement. 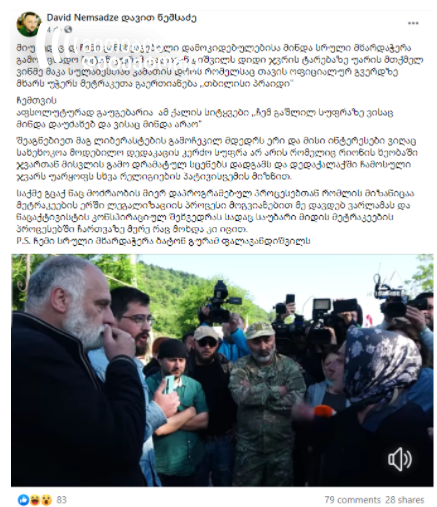 The footage of a meeting between Giorgi Khvedeliani, a member of the National Movement, and Varlam Goletiani was first spread by pro-government media outlet kvira.ge, which wrote that the meeting was secret and conspiratorial. However, the participants of the meeting clarified that the video was filmed in the village of Gumati, several weeks before the Tbilisi rallies and besides Khvedeliani, other persons also participated in it. It is noteworthy that Khvedeliani came to the meeting to express his personal support.

To discredit anti-Namakhvani HPP protesters, Facebook page “Ekvtime Bidzinashvili” focused on the Russian inscription of a megaphone used at the rally. The page mainly publishes the photos targeting Georgian Dream and is associated with the National Movement. 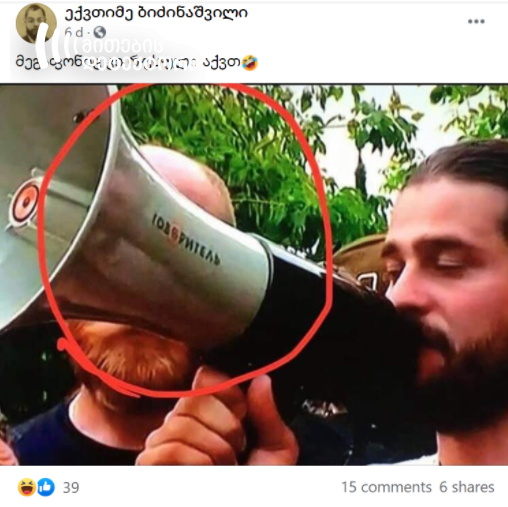 Another pro-opposition Facebook page “ლურჯი ვირი” (Blue Donkey) uploaded a photo of a wallet showing the Crucifixion icon and Sico condom inside. According to the post, someone lost the wallet at the rally. 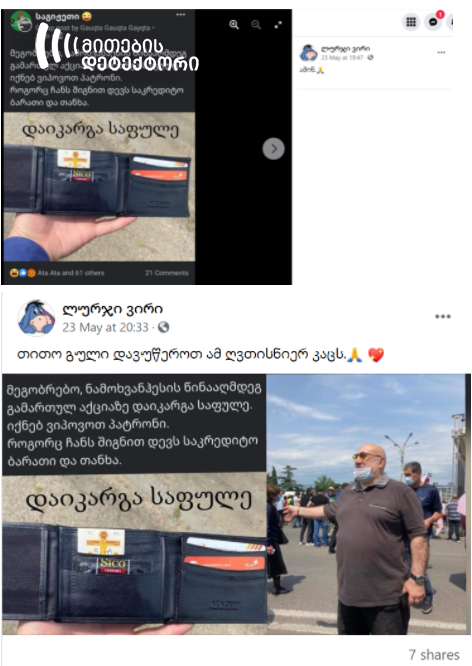 The same photo was initially uploaded by the page “მხარდაჭერა რიონის მცველებს” (Support for Rioni Gorge Defenders) created in April 2021. On May 24, Myth Detector identified this page, along with three other Facebook pages (Protectors of Truth, Youth Movement of Rioni Gorge and Union of Patriots Iberia). All of them were trying to discredit anti-Namakhvani HPP protesters during the Tbilisi rallies. The page “Support for Rioni Gorge Defenders” spread the same photo on May 23. 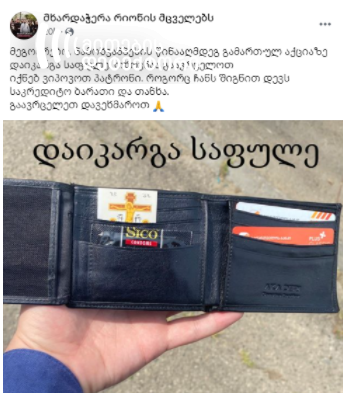 The photo was removed later, while the page continues to publish the posts supporting the Rioni Gorge Defenders. The page has also created a public group having the same name.

In its May 23 photo collage, Facebook page Nari Mani compared Varlam Goletiani to Christ. The caption accompanying the photo called on users to share the post to prevent the construction of Namakhvani HPP. The Facebook page mainly publishes entertaining photos. 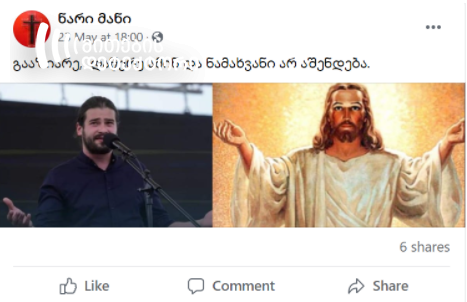