Seven Myths about COVID-19 on Obieqtivi and Ilioni TV Channels 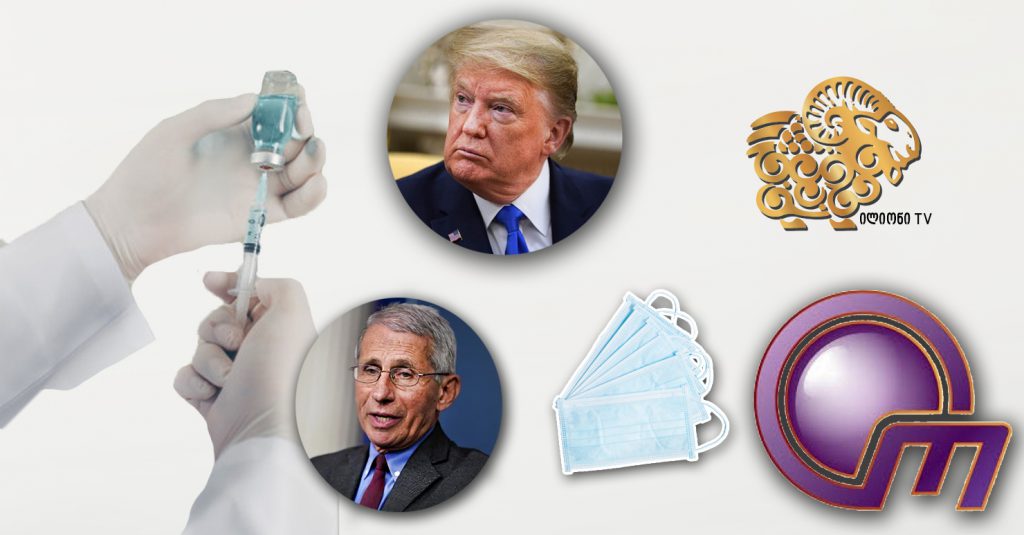 Speaking about the COVID-19 pandemic during Obieqtivi TV program “Gamis Studia” (Night Studio) on July 9, Nona Agdgomelashvili, a Georgian astropsychologist, said that a surprise outbreak is not typical for this type of pandemic and that it was plotted long ago. Referring to the statement made by Anthony Fauci, director of the U.S. National Institute of Allergy and Infectious Diseases, in 2017, she claimed that Fauci mentioned the 2020 pandemic back in 2017. Nino Ratishvili, host of the TV program, agreed with the guest’s opinion that the pandemic is part of the game in which both government and media are involved. Agdgomelashvili also spoke about face masks, saying that citizens should not wear surgical masks, because they do not protect against viruses, while according to U.S. President Donald Trump, they represent a symbol of “social slavery.” Nona Agdgomelashvili also touched upon the issue of vaccination, saying that mandatory vaccination was carried out in Spain and Italy for people aged over 60. She also noted that Bill Gates uses vaccination to reduce population and he needs pandemic just to achieve this goal.

Besides providing factual inaccuracies and conspiratorial narratives, Nona Agdgomelashvili offered the quotes by the U.S. infectious disease chief, which were torn out of context and misinterpreted.

Myth No.1: Pandemic was plotted long ago. Anthony Fauci said in 2017 that the pandemic was anticipated in 2020.

Speaking at a forum on pandemic preparedness at Georgetown University in 2017, Anthony Fauci, director of the U.S. National Institute of Allergy and Infectious Diseases, said that the Trump administration would be confronted with a surprise infectious disease outbreak, causing a new pandemic in the country. Fauci did not mention COVID-19 or a specific year of outbreak. He made a general statement, noting that recent administrations also faced some of the disease outbreaks, including President Barack Obama, whose administration faced an H1N1 influenza pandemic (2009-2010), Zika virus (2015-2016) epidemic and Ebola outbreak (2014-2016). Two factchecking sites, Snopes and wusa9 have both verified the information.

Myth No.2. Anthony Fauci claims that a face mask does not protect us against viruses and simply represents an ethical gesture to show respect towards others

In fact, U.S. infectious disease chief, Anthony Fauci has made no such remarks. Asked about the role face masks play during pandemics, Fauci responded on June 23 that masks are not 100% protective; however, people who wear them are more protected against the viruses. He also noted that some people may feel well but have an asymptomatic infection that they do not even know about. Therefore, face masks protect people from getting infected from someone who either is coughing or sneezing. Fauci also added that only face masks are not enough, and physical separation is the best way to avoid the virus.

Myth No.3. Face masks do not protect us against viruses. According to Donald Trump, a face mask is a symbol of social slavery.

According to the Association for Professionals in Infection Control and Epidemiology (APIC), an N95 respirator blocks at least 95 percent of very small (0.3 microns) particles. The U.S. Food and Drug Administration released an article, according to which a surgical mask is meant to help block large-particle droplets (viruses and bacteria), keeping it from reaching your mouth and nose. Researchers emphasize that a healthy person wearing either a cloth or a surgical face mask is less protected from catching an infection, if he/she contracts an infected person wearing no face mask. Since infected people can spread the virus just by talking, face masks are needed to contain viral droplets and reduce the area of spreading viral particles.

As for the remarks made by President Donald Trump, in fact, the above-mentioned words do not belong to Trump, but the U.S. President simply shared the post by Lee Smith of Tablet Magazine on his Twitter page. The latter said that “image of Biden in black mask endorses culture of silence, slavery and social death.” Trump shared the post with a caption “So many different viewpoints!” The post itself does not confirm that the views of Lee Smith and Donald Trump coincide.

Speaking in the interview with CBS News on July 14, Trump urged Americans to wear face masks “if it’s necessary” and follow the guidelines of the Centers for Disease Control and Prevention (CDC). CDC also calls on the population to wear face masks to prevent the spread of COVID-19.

Myth No.4. Use of face masks leads to CO2 intoxication and Hypoxia

According to the World Health Organization (WHO), the prolonged use of medical masks can be uncomfortable. However, it does not lead to CO2 intoxication nor oxygen deficiency. Thus, the above-mentioned statement is not true. The WHO recommends observing the rules of wearing face masks: make sure it fits properly and that it is tight enough to allow you to breathe normally. Do not re-use a disposable mask and always change it as soon as it gets damp.

Myth No.5: Anthony Fauci says that 70-75 percent of population will have no side effects after vaccination. As for the rest of them, he disclaims any responsibility.

The quotation has been distorted and torn out of context. Speaking in the interview with CNN, Anthony Fauci said that “the best we’ve ever done is measles, which is 97 to 98 percent effective.” He also noted that he would “settle” for a COVID-19 vaccine that is 70% to 75% effective, but this incomplete protection taken by only two-thirds of the population would not provide herd immunity to the coronavirus. Fauci said nothing either about side effects after vaccination or disclaiming any responsibility. Vaccine efficacy percentage indicates at how much we will be protected against a specific virus after vaccination. The U.S. infectious disease chief did not say that the vaccine may harm people.

Myth No.6: Mass mandatory vaccination has been launched in Italy and Spain. Vaccines are ineffective for elderly people, because their immune system is very weak.

Nona Agdgomelashvili’s statement about mandatory vaccination of people aged over 60 in Spain and Italy is not true. First, Agdgomelashvili does not specify which particular vaccination she talks about. COVID-19 vaccines are not yet in use. According to the Spanish National Health System, the following three vaccines are recommended for the population aged 65+:  the flu vaccine, pneumococcal vaccine and tetanus-diptheria-pertussis vaccine (Tdap). However, the government simply calls on the population to get these vaccines and their involvement in the program is not mandatory. Further, no mass vaccination has taken place. On the contrary, the Spanish Health Ministry published the 2009-2019 statistical data on flu vaccination in persons over 65 years, according to which the figures decreased by 11.4% over the past decade. If 65.7% of population aged over 65 got vaccinated in 2009, in 2019 their number decreased to 54.3%.

The situation is similar in Italy – although some vaccines are mandatory, this applies only to children aged 0-16 years. The Italian Health Ministry does not require, but rather recommends elderly people to get vaccinated. It is worth noting that like in Spain, Italy also has low figures of flu vaccination among elderly people (approximately 53%).

As for the weak immunity of elderly people, according to the American Centers for Disease Control and Prevention, our immunity becomes weaker with age that actually increases the risks of developing various diseases, such as pneumonia, herpes, etc. Vaccines help strengthen an immune system and reduce the risks of various illnesses. According to the information published by the World Health Organization in 2008, elderly individuals given influenza vaccine in the United States had approximately 20% less chance of suffering cardiovascular and cerebrovascular disease and 50% lower risk of mortality from all causes compared to their unvaccinated counterparts.

Myth No.7: Bill Gates said in 2005 that he would reduce the population through vaccination and a pandemic was just needed to achieve this goal.

The Myth Detector has already verified conspiracy theories about vaccination and human chipping related to Bill Gates. In fact, the vaccination program launched by Bill Gates in the developing countries aimed at reducing child mortality that, according to Gates, is a precondition for the economic development. The U.S. businessman and philanthropist raised the issue at Ted Talks in 2010. His speech at Ted Talks in 2015 was also used for conspiratorial purposes, according to which Gates used the pandemic to achieve his own goals and impose a total control on the healthcare system. In fact, Bill Gates stressed the importance of getting ready for the pandemic, because it is an important challenge of the 21st century. He did not mention the coronavirus pandemic. He brought an example of Ebola and clarified what should be done to reduce negative consequences of a new epidemic.

Program guest Nona Agdgomelashvili, who has spread the above listed seven myths, was invited to Obieqtivi TV and Ilioni TV with a status of a therapist.

Ilioni TV is broadcasting in trial mode. The public registry registered the TV channel as Ilioni Ltd. Ilioni TV has a Facebook page, which was created on December 22, 2019. The broadcaster also has an official YouTube channel launched on August 21, 2018.

Ilioni Ltd was registered on August 14, 2017. Malkhaz Pilauri, who simultaneously is a member of Free Georgia party’s political council, served as the director. According to the extract from the public registry dated June 19, 2020, presently Roini Khijakadze, who is one of the leaders of Free Georgia Party serves as the director of Ilioni Ltd. Noteworthy that the list of owners has also changed. In 2017, Laura Omanidze was the only partner with a 100% share, while in 2020, the list of owners includes: Laura Omanidze (40%), Sopio Kapanadze (28%) and Keto Shengelia (32%).

On May 25, 2020, Ilioni Ltd applied to the Georgian National Communications Commission for authorization, but due to certain shortcomings in the submitted documents on the plan and sources of financing, it failed to receive authorization. Later on June 4, after submitting all requested documents, Ilioni received a private broadcasting license.

Media Union Obieqtivi was established in August 2010. A co-founder of the company is Irma Inashvili, the current Secretary General of Alliance of Patriots of Georgia (APG); however, since 2014, she is not listed among the management of the channel. Channel pursues Turkophobic, xenophobic and homophobic editorial policy. In its fifth monitoring cycle report, the European Commission Against Racism and Intolerance (ECRI), based on MDF’s study, recommended Georgia that the authorities “review their contracts with media outlets and cancel or not renew them in cases where media are known to engage in racist or homo-transphobic hate speech.” The report, among other outlets, referred to Obieqtivi TV.