Sensationalism and Unfounded Information at Mtavari Arkhi TV about Coronavirus 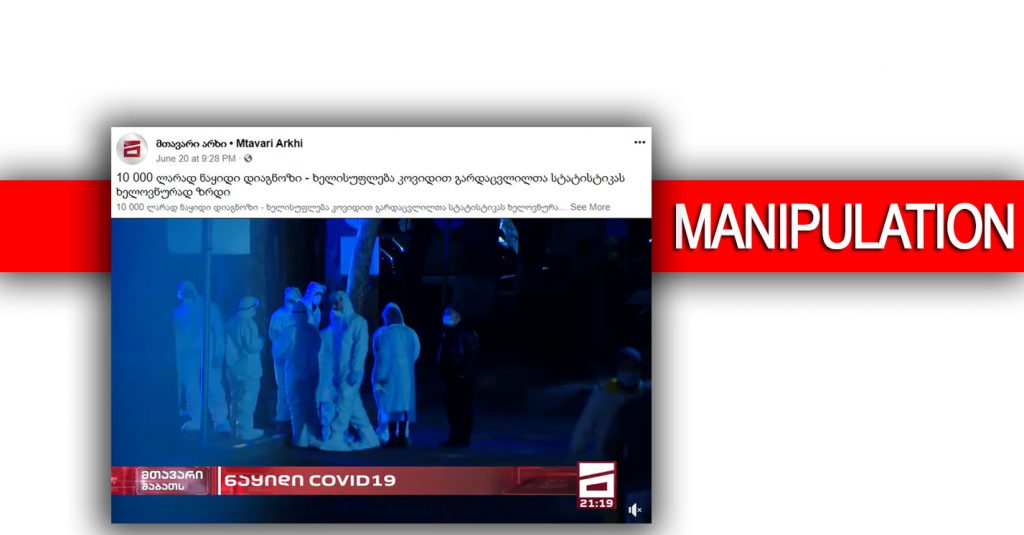 On June 20, pro-opposition Mtavari Arkhi TV aired a story titled “Purchased COVID-19.” The TV channel also shared the story on its Facebook page with a caption “Diagnosis worth GEL 10,000 – the government artificially increases the data on COVID-19 deaths.”
The story begins with the darkened footage featuring the emergency vehicle and doctors in special protective equipment coupled with unpleasant background music. Then, the story shows a respondent, saying that her son died from heart disease, but doctors offered her to name another diagnosis. The story triggers strong emotions from the very beginning. Following the interview with the respondent, the narrator claims that the woman was offered GEL 10,000 so that she named COVID-19 as the cause of death of her family member.

The author of the story claims that there are a lot of such facts, but nobody wants to speak out. According to the journalist, mainly residents of Marneuli Municipality, Georgia’s southern area worst hit by COVID-19, have been offered money in exchange for changing diagnosis.

“I went to a local Chaikhana [tea house] to find out more, as this is the place, where you can receive any information about recent developments in the municipality. The information was confirmed. Locals told us that these people visit almost all families with recently deceased family members and offer them money in exchange for naming coronavirus, regardless of the actual cause of death,” the author says. Then, several respondents also speak about this issue, but none of them confirm the information and only refer to some reports. “Whole Marneuli is talking about it,” “As far as I know, some low-level officials from local self-government visit them,” “I was told at Chaikhana that some families were offered money” – the journalist portrays respondents’ assessments as an authentic evidence of the fact.

Then, the issue acquires political context with the author linking COVID-19 statistics to possible postponement of the date of elections. However, it should be noted that neither do the experts featuring in the story provide any confirmed information about artificially increased statistical data. One of them only supposes that statistical manipulation may be in the government’s interest ahead of elections. Another respondent calls falsification of the cause of death “a serious issue,” noting that “if confirmed, an investigation should be launched.” So, it can be said that neither do other respondents have any confirmed information about the Marneuli reports.

By the end of the TV story, the journalist also speaks about the education system. The author seizes upon the survey published by a teacher in one of closed groups regarding how parents prefer the studies to be continued from September to promote the unfounded information, according to which the government needs to artificially increase COVID-19 statistics in order to postpone the elections. “What is the government preparing for? Reportedly, Georgian Dream will make a decision on possible postponement of elections according to political ratings the party will have by the end of this summer. According to the latest data, the results of Ivanishvili’s team are far from desirable; therefore, it is not ruled out that the ruling force will use the pandemic for political purposes,” the journalist ends the story with these words.

Noteworthy that almost the six-minute story did not provide the position of the other side – an addressee of accusations. The story did not offer comments from representatives of the Ministry of Health, Georgian Dream or local self-government. Neither did it note whether they applied to the other side to verify the information and whether they received relevant information from them.

Director of Tbilisi Infectious Diseases and AIDS Center, Tengiz Tsertsvadze responded to the TV story on June 23, calling the accusations “absurd” and saying that even if the reports were true, it would need some tens of millions of Lari to bring death statistics closer to European figures.