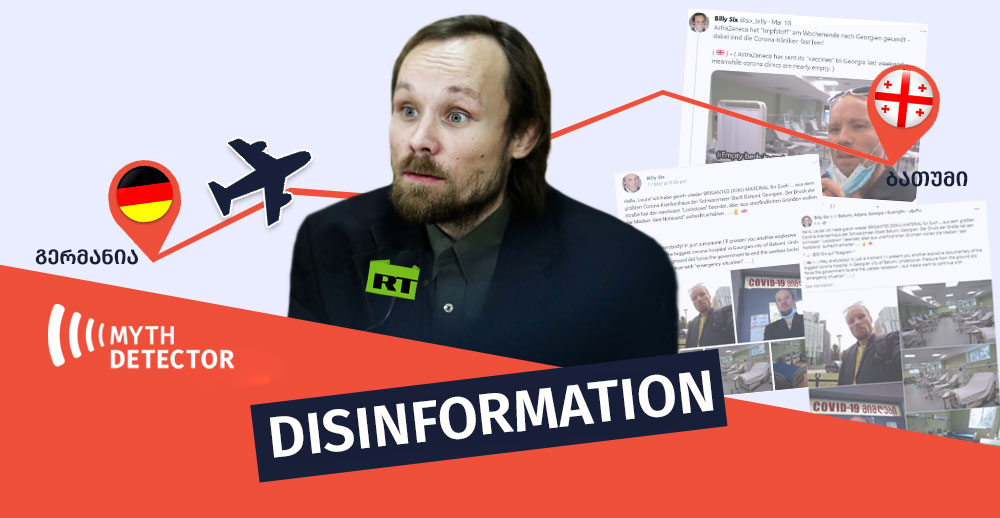 On 21 March, a Facebook user, Koba Kuprashvili, posted a video showing a German-speaking man roaming the Batumi Republican Hospital and filming empty corridors and wards. The man concludes that since there are no covid-infected patients there, the pandemic has ended in Georgia and that AstraZeneca vaccine, rejected by Europe, has been brought to Georgia. In his post, Koba Kuprashvili refers to the man as a “German blogger” without providing his name.

Claim of the author of the video that the Batumi Republican Hospital is empty and there are no covid-infected patients is disinformation. In reality, the video does not show the Covid-19 unit of the hospital but the renal unit which, at the time of filming, has not had patients.  The man in the video is a German blogger Billy Six who has shot a similar video of manipulative nature in Germany too.

Myth Detector reached the Batumi Republican Hospital and was told that the video was indeed filmed in their building. However, it features the fifth floor of the hospital, in particular, the renal unit which does not have patients now. The therapeutic unit, with the occupancy of 167 patients, is on the fourth floor while the intensive care unit for Covid-infected patients is housed on the second floor.

It is worth noting that the video clearly shows dialysis machines and beds for hemodialysis patients to receive treatment. 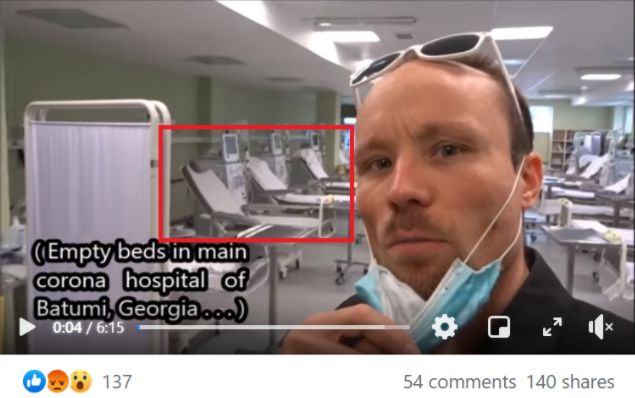 The man speaking in the video is German journalist Billy Six. On 17 March, he posted the video on Facebook, Russian social network VKontakte, and BitChute, a social video-hosting platform notorious for its ultra-right members and conspiracy theories. The video posted on all these social media has the identical text saying: “Exclusive Story: Presumed junk vaccines of AstraZeneca now “vaccinated” in poor Georgia – despite – still – quite empty corona hospitals!” On 18 March, the video appeared on the Twitter account of Billy Six too, but with a slightly different message: “AstraZeneca has sent its “vaccines” to Georgia last weekend – meanwhile corona clinics are nearly empty.” 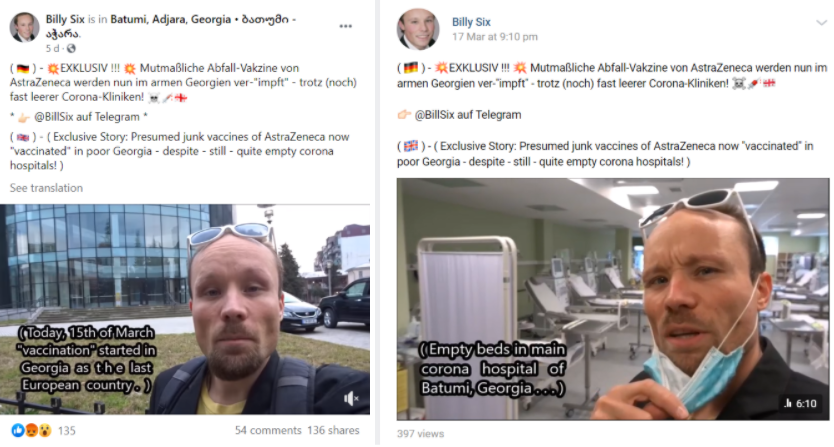 To promote the video, Billy Six published another post about Batumi on Facebook, VKontakte and Twitter. The posts on Facebook and VKontakte said: “Hey, everybody! In just a moment I’ll present you another explosive documentary of the biggest corona hospital in Georgian city of Batumi. Undercover. Pressure from the ground did force the government to end the useless lockdown – but media want to continue with “emergency situation” . . ., while the post on Twitter said: “Big corona hospital of Batumi/Georgia is nearly empty too: Only 20 of 200 beds used, no intubation.” 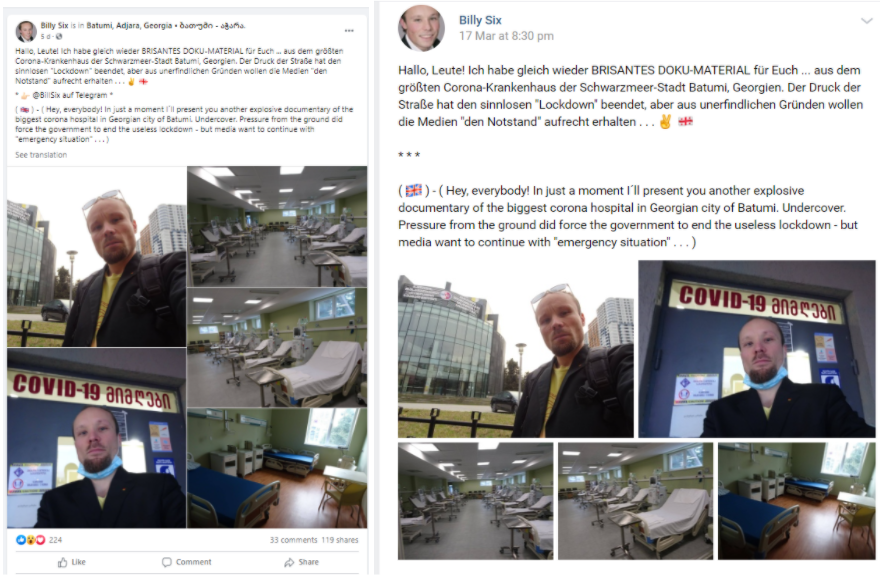 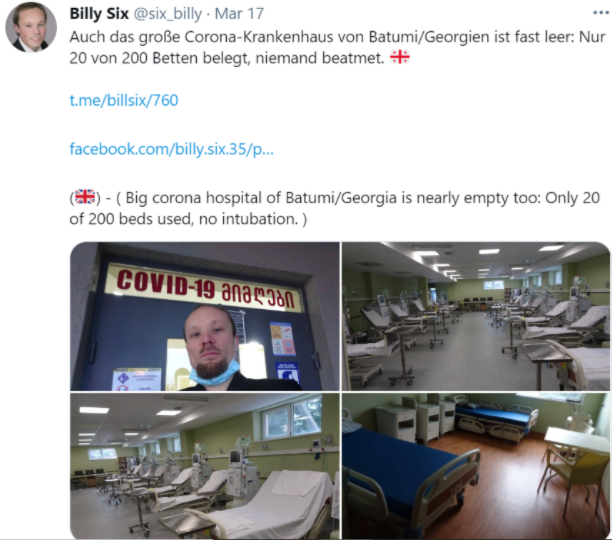 According to the author, the video was filmed on 15 March; however, the date indicated on a fragment of video where Billy Sax voices his protest against testing healthy people is 11 January 2021. 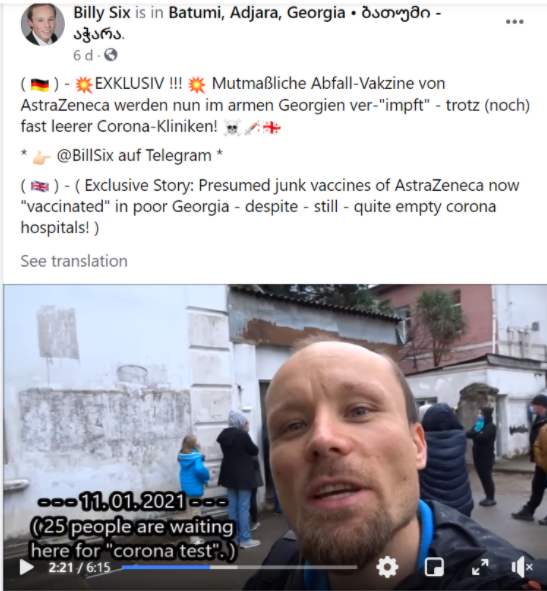 According to the recent video posted on the Facebook page of Billy Six, he has already returned to Germany and got engaged in the protest staged against coronavirus-related restrictions.

Since the outbreak of the coronavirus pandemic in 2020, Billy Six has been conducting an aggressive anti-vaccination campaign. In March 2020, he released a video similar to that of Batumi from a German hospital too. In that video, the author claimed that he arrived at Charité coronavirus center but found the building empty, which meant that the emergency situation was invented and staged. German fact-checking platform, CORRECTIV, found out that Billy Six, in reality, was at the university campus Virchow-Klinikum which stands separately from the coronavirus center.

Video manipulations about empty hospitals to demonstrate that the pandemic is exaggeration have been double checked by Myth detector too:

Who is Billy Six?

Billy Six is a German ultra-right journalist. From August 2012, he covered the civil war in Syria for the ultraconservative newspaper JUNGE FREIHEIT. At the end of 2012, the Syrian authorities arrested Billy Six on charges of terrorism and illegal border crossing. Three months later, he was released from jail. Syria’s Deputy Foreign Minister Faisal Maqdad said that the released journalist was handed over to the Russian Ambassador in Damascus. 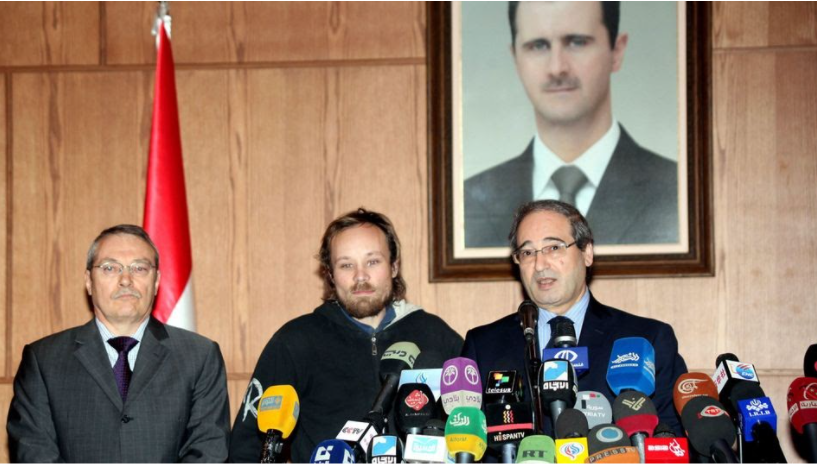 At a news briefing called after the release of Billy Six, the chief editor of JUNGE FREIHEIT, expressed his gratitude to German authorities and the Russian government.

In December 2018, Billy Six was detained again, in Venezuela, on charges of espionage and violation of security zones. He was accused of taking photos of the army during military parades and of President Maduro during his public appearances; he was also accused of having contacts with members of the Colombian guerrilla organization FARC. According to Venezuelan legislation, Billy Six was facing 28 years in prison. JUNGE FREIHEIT launched a campaign “Free Billy Six.” However, it was the Russian diplomacy that played a decisive role in freeing him. In March 2019, Billy Six was released from the prison and he returned to Germany. In his first statement after arriving in Germany, Billy Six slammed the German Embassy for doing nothing, while his father thanked the Russian Foreign Minister Sergey Lavrov. According to him, Billy was released quickly owing to help from Lavrov.

Billy Six participates in Russia Today’s documentary “MH17: ‘No one deserves to die that way’”. The documentary is about the Malaysia Airlines’ passenger flight which was shot down in the territory of Eastern Ukraine on 17 July 2014. In the film, Billy Six repeats Russian narrative, accusing the Western media for disinformation against Russia as if the missile that downed the airplane was launched from Russian territory near Ukraine. In the documentary, Billy Six says that he visited the place of accident himself but could not find a witness among local residents who had seen a smoke trail left by the missile when it was launched.

The film shows Billy Six and an RT journalist inquiring of a local resident if he saw BUK ground-to-air missile smoke trail and the local replying that he saw nothing of the kind from any angle.

Then, Billy Six once stresses again that he was not able to find a person who would confirm the happening, while the RT journalist agrees with him based on his experience.

In reality, a group of international investigative journalists, Bellingcat, as well as the Joint Investigative Team of Australia, Malaysia, the Netherlands and Ukraine, established that the missile was launched from Russia’s 53rd Anti-Aircraft Missile Brigade.

Interestingly, after a month of the RT documentary, Bellingcat recorded an interview with Billy Six. The interview concerned a few-second-long video published by the Interior Ministry of Ukraine on 18 July 2014, which showed the movement of Buk missile system. Russian Defense Ministry claimed that the video was fabricated.

Billy Six discovered that the place of accident indicated by the Russian Defense Ministry was incorrect and only after reading Bellingcat materials, he was able to find the exact place where the video was shot; he also met a woman who filmed it. Billy Six told Beelingcat that the video was indeed filmed in Luhansk. According to the date specified by Six (30 January 2015), he discovered that inaccuracy nine months before the release of RT documentary, but he never commented about that error in the Russian Defense Ministry’s statement to Russian media.

In 2016, in the BBC TWO documentary “Who Shot Down MH17?” which was dedicated to conspiracy theories about the accident, Billy Six repeated one of Russian narratives about the involvement of Ukrainian fighters in the shooting down of the plane. A similar information was reported by the Russian side too; Russian experts believed that the Boeing plane was downed by Ukrainian SU-25.