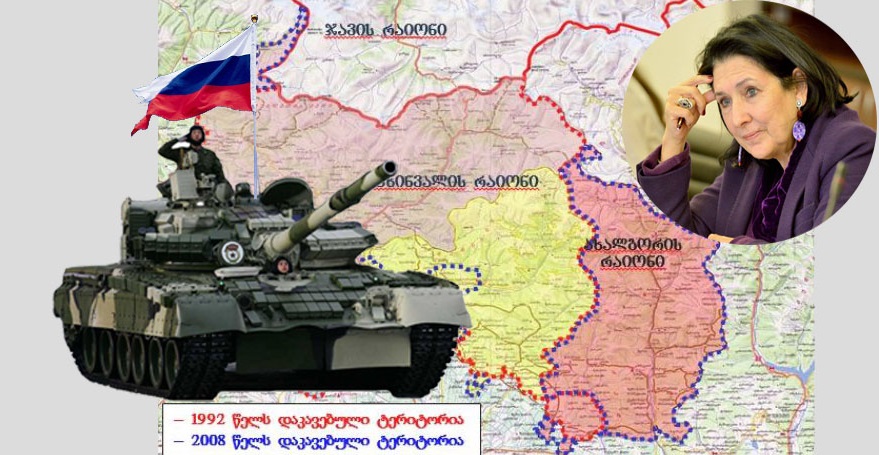 On October 12, Rustavi 2 TV’s news program Kurieri (Courier) aired a statement made by the ruling party-endorsed presidential candidate, Salome Zourabichvili, who said during her campaign meeting with the population of Shida Kartli region that the previous government, particularly, ex-President Mikheil Saakashvili restored South Ossetia within its Soviet-old borders. Salome Zourabichvili, the ruling party-endorsed presidential candidate: “Why did the then President [Mikheil Saakashvili] restore South Ossetian within its Soviet-old borders, instead of the borders defined by our partners in OSCE, which did not involve either Akhalgori district or Liakhvi Gorge and which did not lie where we see creeping borders today.”

Salome Zourabichvili’s statement is manipulative, because portrayal of Russia’s occupation of Georgian territory, particularly Samachablo, as restoration of Soviet-old borders by the previous government aims at removing the burden of responsibility from Russia.

In 2008, Russia annexed those territories, which were administered by Tbilisi during the Soviet period. Similar statement was made a year ago by the host of Obieqtivi TV affiliated with the pro-Russian Alliance of Patriots party, who claimed that no Russian creeping occupation had actually taken place and that Mikheil Saakashvili restored South Ossetia within its autonomous borders.

Chronology of the conflict

Like Georgia, Ukraine’s pro-Russian opposition also blames its own government for unleashing the war. Ukraine’s opposition bloc is most loyal towards Russia. The Kremlin Influence Index, a quantitative tool designed by the group of think tanks from Eastern and Central Europe to measure the ability of the government of the Russian Federation to influence on information space of other countries, reads that “the Opposition Bloc avoids direct positive assessment of the Russian Federation aggressive policy (justification of the aggression, the occupation of Crimea, etc.), but primarily blames Kyiv for unleashing and continuing the war and calls for dialogue with the Kremlin, promising peaceful life to citizens.”

According to the same report, in late 2016, the experts observed the targeted communication of the message that restoring relations with Russia is inevitable. As a rule, Kyiv is made responsible for the outbreak of war (it didn’t “hear Donbas”, it has interest in the war continuation) in such cases. This rhetoric is particularly used by the Opposition Bloc.

The material on a similar topic: Obieqtivi Host Rejects the Annexation of Georgia by Russia