On December 9, an online edition Sakinformi published an article titled “US Congress Acknowledged Interfering in Georgian Affairs”. The article concerns a statement made by the Chair of the United States House Committee on Foreign Affairs about the activities of NDI and IRI.

The title of the article, according to which the US Congress acknowledged the interference in Georgian affairs is disinformation and does not correspond to the content of the article, which reads that according to Eliot Engel, “American institutes acting in Georgia work with the entire Georgian political spectrum and do not pick sides”.

What did Eliot Engel say?

The Chair of the United States House Committee on Foreign Affairs, Eliot Engel, mentioned in a press-release, published on December 6 that the US Congress supports the development of democracy and civil society in Georgia. According to him, NDI and IRI work both with opposition parties and with Georgian Dream and they do not pick sides. Engel recommends Georgia to extend cooperation with these organizations. He also added that “while Russia keeps occupying the territory of Georgia, Georgian people remain on the frontline against Vladimir Putin’s aggression”.

“The U.S. Congress stands with the people of Georgia, and I will continue to do all I can to support democracy and civil society in Georgia” – Eliot Engel.

On November 27, live on Imedi TV, Bidzina Ivanishvili voiced his negative attitude towards IRI and NDI polls and noted that these American organizations harm the interests of the United States as well, as they have been lying for years and in fact, are satellites of the United National Movement Party.

The 100 percent shareholder in the news agency Sakinfomi LLC is Arno Khidirbegishvili who is also the editor-in-chief of the edition since 2013. According to damoukidebloba.com, the domain of Sakinformi is registered on the name of Taras Gagnidze who is the leader of the pro-Russian organization Historical Heritage which also owns Georgia & World. Like Geworld.ge, Sakinformi is notorious for its hate speech. 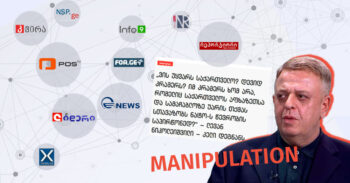