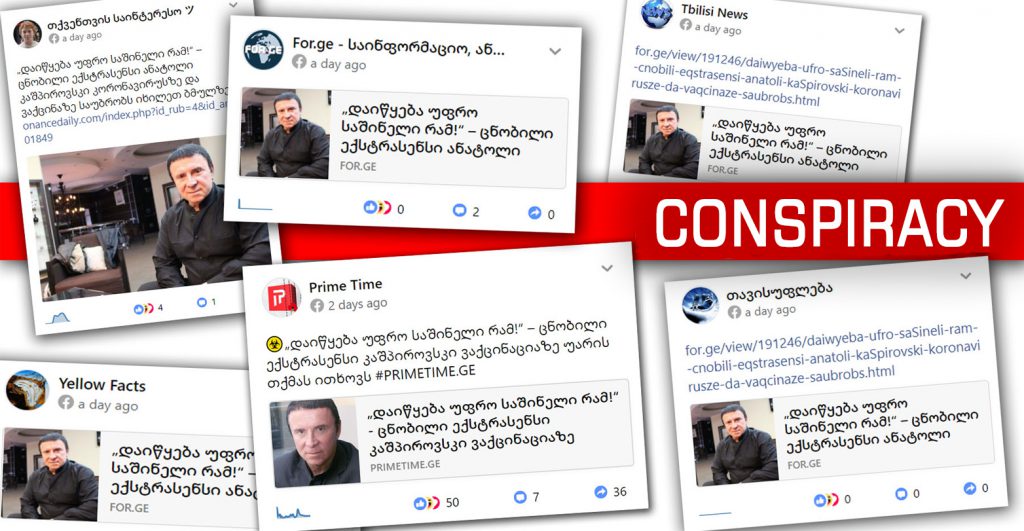 Anatoly Kashpirovsky, a Russian psychic, became a source of anti-vaccination conspiracies in the Georgian media. His address to the President Vladimir Putin has been published by Georgian editions For.ge, Resonancedaily.com, and Primetime.ge. In the news, titled “More Horrific Things Will Begin” (Kashpirovsky’s words), the psychic labels the pandemic a hoax and calls on Putin to abstain from mass vaccination. He also added that after the COVID-19 is gone and the vaccinations are done, a “mass murder of people” will begin and Bill Gates will play his part in it:

The claim that the mass vaccination allegedly aims to carry out mass murders and that Bill Gates is involved in this process, is a conspiracy.

The origin of this disinformation is Bill Gates’ 2010 Ted Talk at which he presented the program “Innovating to zero” which the Russian psychic interpreted as “there are too many unnecessary people”. During his talk, Gates mentioned that vaccines are of significant importance for the developing countries in terms of reducing child mortality which in turn would slow down the population growth.

The disinformation around Gates’ vaccination program allegedly causing depopulation has been disseminated for years. Besides the artificial reduction of the population, myths about the vaccines being used for insertion of microchips in humans or causing infertility are also common. Bill and Melinda Gates Foundation campaign has already covered 90% of children from the developing countries which includes new type of vaccines against diarrhea and pneumonia. According to the foundation, vaccinations prevented 7.6 million deaths of children under the age of 5 in 2010-2019. Rapid introduction of anti-malaria drugs in 2014 saved 1.1 million more children, adding up to a total of 8.7 million saved children.

Kashpirovsky’s video address, which has accumulated half a million views already, has been shared by a Georgian Facebook page „თქვენთვის საინტერესოა“ (Interesting for you), as well as pages associated with For.ge, such as „თავისუფლება“ (Liberty), Yellow Facts, and Tbilisi News. 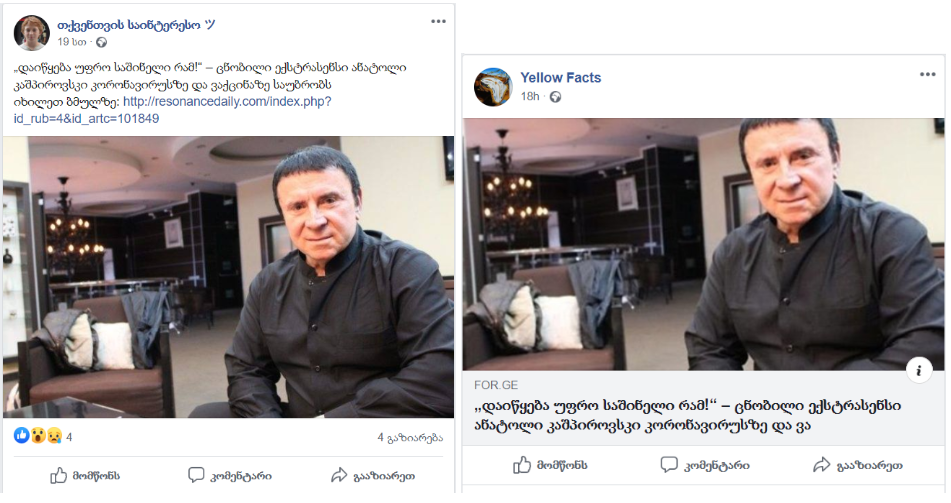 The address has also been disseminated on Russian Facebook pages and media outlets: Lenta.ru, News.ru, koronainfo.ru, og.ru, and runews24.ru. All of them reiterate the narrative that the real threat is facing the humankind after the end of the pandemic.