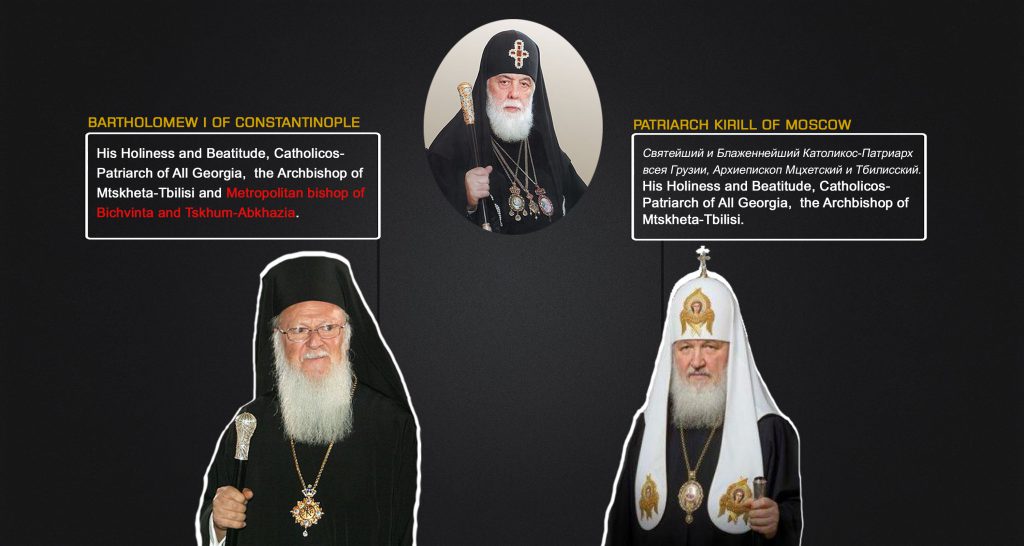 On January 9, 2019, Nino Burjanadze, the leader of pro-Russian party “Democratic Movement” held a press-conference where she spoke about the autocephaly of Ukraine. According to Burjanadze, if the Georgian Church recognizes the autocephaly of the Ukrainian Church, the Russian Patriarchate will recognize the independence of the Church of Abkhazia. On the same day, Nino Burjanadze talked about this issue at the TV Obieqtivi and noted that the issue of autocephaly of Ukraine is in the interests of the USA in order to promote the split between Russia and Ukraine.

1. Unlike Constantinople, the Russian Patriarchate does not recognize the title of the “Metropolitan Bishop of Tskhum-Abkhazia” of Ilia II.

How Patriarchs of Constantinople and Moscow mention Ilia II

2. The recognition of independence of the Church of Abkhazia by Russia can be only a formality. The Abkhazian eparchy has been ruled by the Russian Patriarchate for years.

The Moscow Patriarchate has been openly interfering in the work of Bichvinta and Tskhum-Abkhazia Eparchy for years. Accordingly, fears as if the recognition of Church of the Ukraine by the Church of Georgia will make us to lose Abkhazia, are unfounded, as the Abkhazian eparchy is already ruled by Russia.

Although, the Russian Patriarchate does not recognize the independence of Abkhaz church, it is only a formality. In reality, not only Russia interferes in the affairs of the Eparchy of Abkhazia, but it even rules it for years.

The Russian Patriarchate represents the main threat for the Eparchy of Abkhazia, as it sends its clerics to occupied Abkhazia that is legally unjustified. Frequently, the churches located in Abkhazia are whitened and damaged in order to erase Georgian trace there.