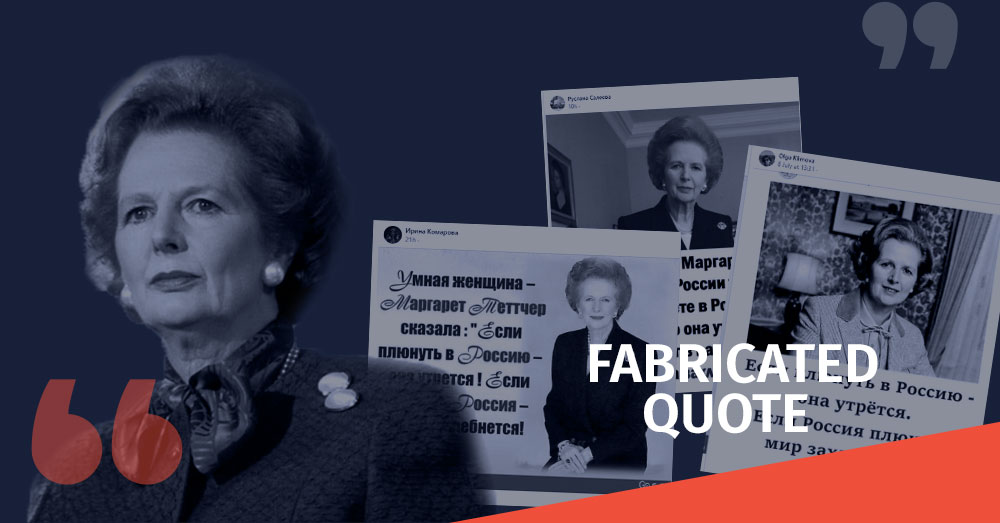 On July 5-15th, 2022, Russian-language Facebook users (1, 2, 3, 4, 5) published a photo of the former British Prime Minister, Margaret Thatcher, with the following quote: “If you spit on Russia, it will clean it, if Russia spits, the world will drown.” 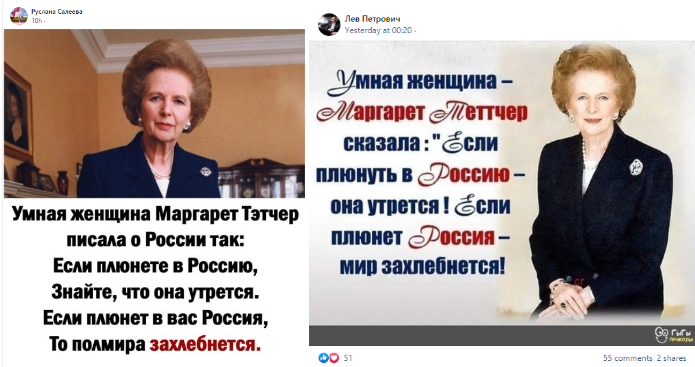 The quote attributed to Margaret Thatcher has appeared on Russian-language social networks since 2014, although an identical or even similar quote cannot be found either on the Thatcher Foundation website or other English and Russian-language authoritative sources. Accordingly, there is no evidence that the former British Prime Minister uttered or wrote words identical or similar in content to the disseminated quote.

While searching for the English translation of the quote with various search engines, no similar or identical quote by Thatcher could be found in reliable sources. When it comes to social networks, one can say that the earliest versions of the alleged phrase of Thatcher date back to 2014. For instance, in August 2014, one of the Facebook users published the quote along with several caricatures of Thatcher. At the end of 2014, an identical quote was published on the websites Pikabu and LiveJournal. 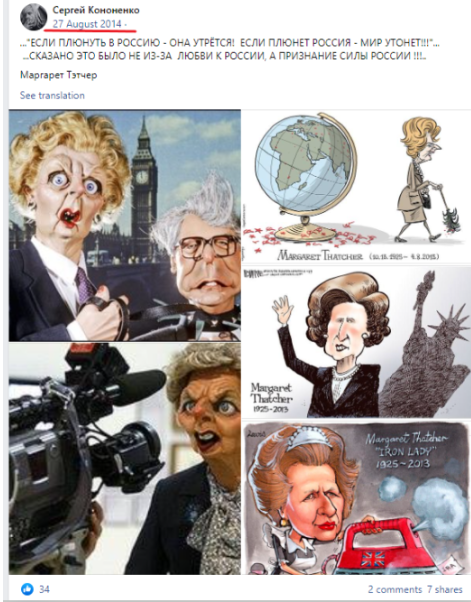 Notably, the words ascribed to Thatcher about “spitting Russia” cannot be found in English-language sources at all. The Margaret Thatcher Foundation’s website (www.margaretthatcher.org) has an open collection of thousands of interviews, speeches, statements and public comments by the former British prime minister, but no similar phrase can be found among them.

The quote cannot be found in Russian-language academic sources either; however, on February 23rd, 2022, in the program “Вести”  by Россия-1, during a story devoted to the sanctions imposed by Europe on Russia, a journalist, while criticizing various actions and statements of British politicians,  used the alleged quote of Thatcher to underscore the significance of Russia: “It is not known for certain whether Margaret Thatcher formulated her opinion in this way, but she is credited with the following statement: If you spit on Russia, it will wipe it clean; if Russia spits, half the world will drown!”

The quote was also mentioned in the article of “Московский комсомолец” on February 24th, 2022, in which the open letter of the head of the Russian public organization of veterans, Boris Gromov, was published. In the text addressed to the leaders of the US, EU, NATO, UK, and other countries, the author of the letter expressed his support for the actions of the Russian leadership and criticized foreign leaders. At the same time, the author of the open letter urged foreign politicians to reflect on the words of Thatcher. 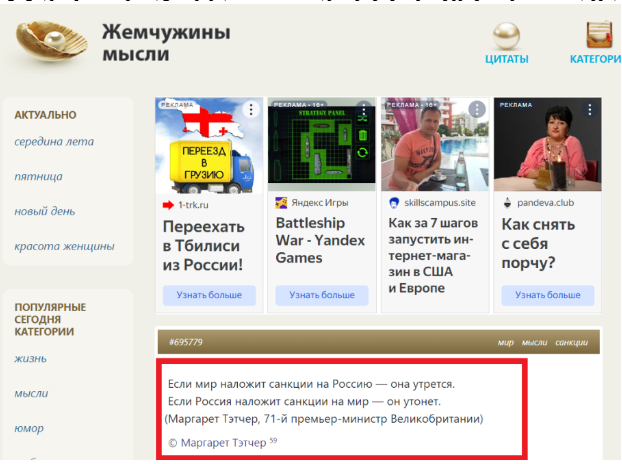