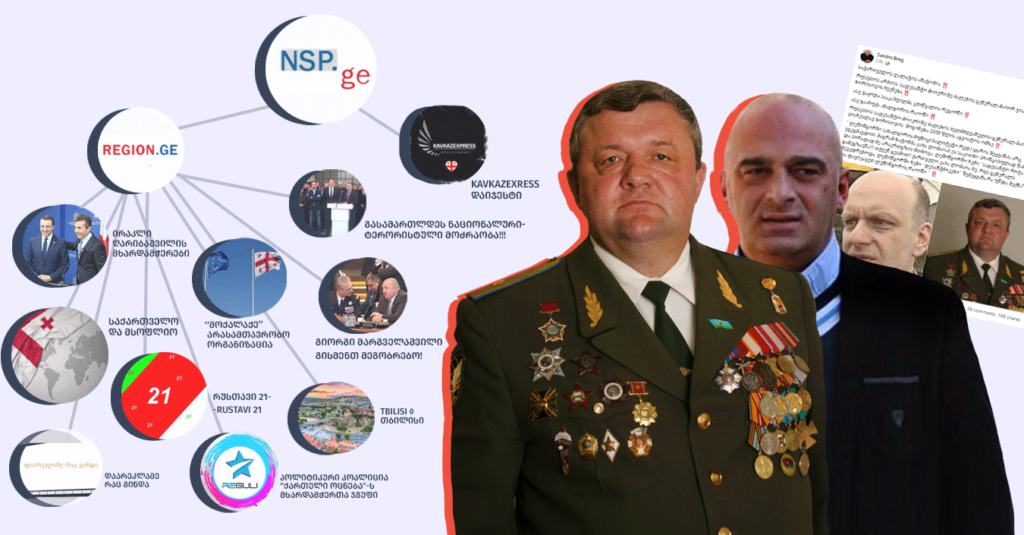 On October 29th, 202, a few hours before the start of the second round of local self-government elections, an article of the online news agency NSP.ge of August 17th, 2020, was disseminated in a coordinated manner on the social network. The piece uses the following headline “Scandalous Statement of the Russian General: We were not planning to enter Akhalgori in 2008 – we occupied the district at the request of Kakha Lomaia” and creates the impression that the Akhalgori district was occupied by the effort of the leaders of the United National Movement. The article also claimed that based on his kind will Vyacheslav Borisov returned 15 war hostages from Tskhinvali and 22 from Abkhazia without asking anything in exchange. 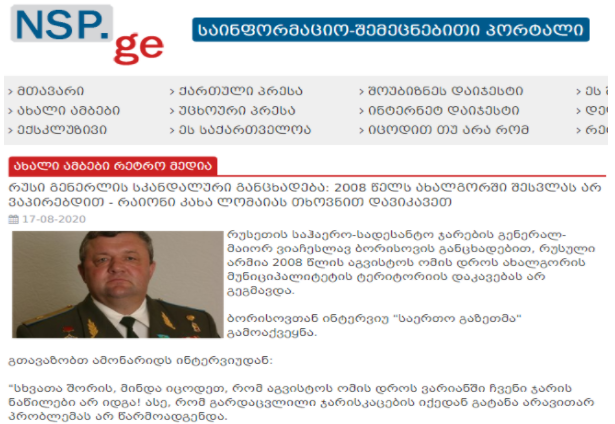 The claim that Vyacheslav Borisov returned war hostages to Georgia on his own kind will is disinformation. In reality, the exchange of war prisoners was held under the auspices of the French embassy. The allegation of Borisov that the Akhalgori district was occupied at the request of the chairman of the security council of that time is a part of the Russian propaganda, aiming to blame the Georgian side for instigating the Russo-Georgian war.

During the Russo-Georgian war in 2008, after the end of hostilities, the Georgian and Russian sides exchanged hostages on August 19th, in the village of Igoeti. As we read in an extensive article prepared for Le Monde by the French war reporter Jonathan Little, the exchange of prisoners between the Georgian and Russian sides took place under the auspices of the French Embassy in Georgia and mediated by the Ambassador of France Eric Fournier. Information about the involvement of the French Ambassador alongside Kakha Lomaia in the exchange of captives can be found in the transcript of the session held within the framework of the investigation of the Parliamentary Temporary Commission. On August 19th, the Georgian side released five Russian war prisoners in exchange for 15 Georgian counterparts.

During a comment with “Myth Detector,” Kakha Lomaia, the former chairman of the Security Council, labelled the statement as absurd and claimed that any communication he had with the Russian side during the conflict was liaisoned by the French embassy.

Coordinated Spread of the Article

The article of NSP.ge from the last year discredited the United National Movement and raised fears of an armed conflict with Russia. The post was shared on the evening of October 29th by the Facebook accountRegion Ge and the Facebook pageKavkazexress Digest.

On the evening of October 29, the post containing the quote of the Russian general Borisov also appeared on the Facebook page of Sandro Bregadze, one of the leaders of the ultra-nationalist and pro-Russian party “Georgian March.” Bregadze mentioned that Mikheil Saakashvili sold the Tskhinvali region and gave the Akhalgori region to Russia. As of 15:00 of October 30th, Sandro Bregadze’s post accumulated 226 shares. 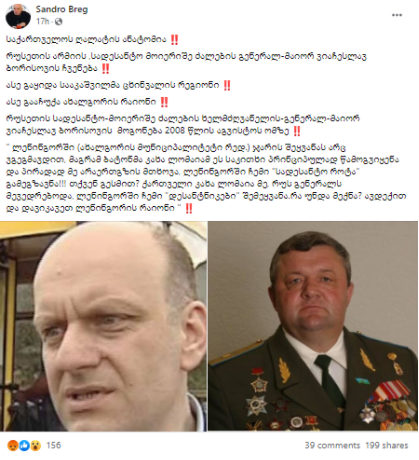 The article prepared by NSP.ge was based on the quote of Vyacheslav Borisov made in 2012 and was distributed in a coordinated manner in August last year. In August 2020, the article was published mainly by Facebook accounts supposupportingGeorgian Dream and the Alliance of Patriots of Georgia.

Major General Vyacheslav Borisov of the Russian Air Force wasappointed commander of the 12th Russian military base in Batumi in 1998. After his appointment, Borisov became an outspoken supporter of Aslan Abashidze. In the fall of 1999, he challenged the government of Eduard Shevardnadze, prompting the Shevardnadze government to formally recall Borisov from Georgia for openly interfering in the country’s internal affairs. Borisov also took part in the 2008 Russia-Georgia war, and the Russian army occupied Gori under his command.

For more information about Vyacheslav Borisov, see the article of “Myth Detector:”

Who is Vyacheslav Borisov and Who Disseminates His 2012 Statement about the Russo-Georgian War?

NSP.ge, as well as region.ge, whose Facebook account was used to share the article of NSP, are affiliates of the Russian government-owned Sputnik. Noteworthy, in recent years, ministries and government agencies cooperated with both outlets on the basis of budgetary contracts to disseminate information and advertisements. NSP.ge and Region.ge’s cooperation with public institutions was reflected in the Media Financial Transparency Reports prepared by the Media Development Foundation in 2018,2019 and 2020. Over the years, these online platforms have received tens of thousands of GEL from the state budget.

Noteworthy, the Facebook profile Region Ge has been regularly sharing the materials prepared by nsp.ge that discredit the United National Movement and support the incumbent Georgian Dream party.