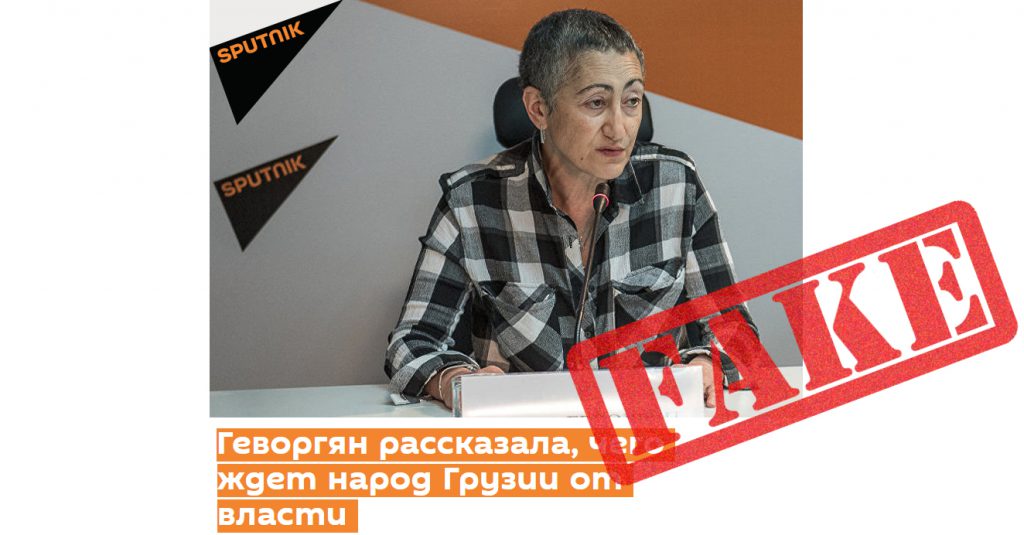 On December 1, 2018 Sputnik Georgia’s Russian language edition published a comment by Russian political scientist Karine Gevorgyan on Presidential elections in Georgia, where she claims that Georgian people are more concerned with the threat of Islamic terrorists and flow of migrants rather than with the outcome of the election.

Karine Gevorgyan: “Georgian nation expressed its opinion by this voting [Presidential elections], but as far as i know, people’s concerns are related not as much to these elections, as to the situation in the region, to the flow of Islamic terrorists. They have settled pretty well in Georgia and the population awaits that the government will resolve this issue somehow. There are lots of migrants in Georgia and they feel quite well there. It has to be said that this is a trending issue, however barely discussed”.

Gevorgyan’s comment  has not been published on Sputnik Georgia’s Georgian language edition.

Gevorgyan’s statement is false as according to public opinion polls, Georgians are mostly concerned about economic well-being and not with threat of terrorism in the region or migrants. Moreover, accusations on increased number of migrants are groundless, since according to UN’s 2017 International Migration Report migrants make a total of only 2% of the Georgian population and there is only 2,63% increase in migration to Georgia over 17 years.

1. According to public opinion polls, Georgians are mostly concerned about economical issues rather than with threat of terrorism or migration 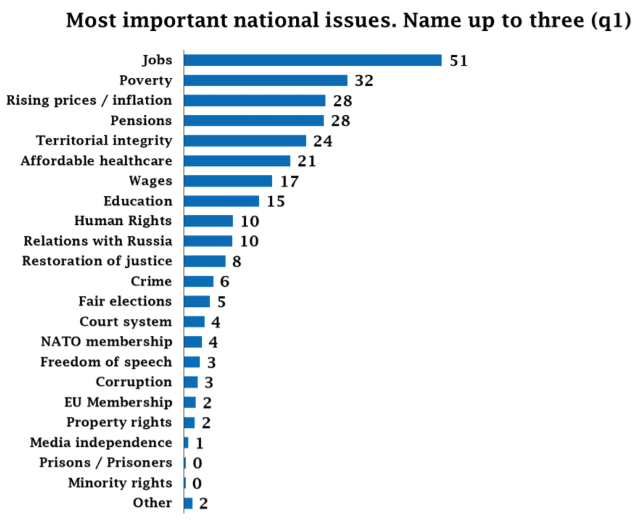 Same picture is seen in IRI 2018 april poll results, where migration, as a problem facing Georgia is only on the 9th place. Though migration here might include as immigration into Georgia, as well as Georgian citizens who left the county. According to IRI poll results, top 4 problems are unemployment, economy, territorial integrity and social problems. 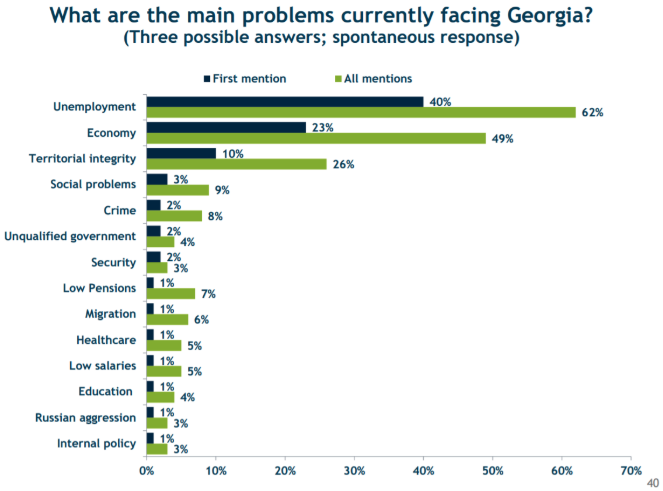 As the polls show, the main concern of the Georgian citizens is their economic well-being and not threat of terrorism or migration.

2. Statistically, migrants make a total of 2% of the Georgian population and there is only 2,63% increase in migration to Georgia over 17 years.

According to UN’s 2017 International Migration Report, 78 000 international migrants are currently living in Georgia (including occupied regions). This makes migrants a 2 percent of the total Georgian population, in other words, 2 migrants per 100 000 person. As a comparison, in 2000, Georgia was inhabited with a total of 76 000 migrants according to UN’s report. This shows that there has only been a 2,63% increase in migration to Georgia over 17 years.

Therefore, a statement that Georgia is populated with a huge number of international migrants is a misrepresentation.

3. Portrayal of migrants as a threat is mainly stemming from pro-Kremlin and ultra-nationalist actors

Disinformation that there is a colossally large number of refugees and asylum-seekers in Georgia, posing the greatest risk to the country’s security is mostly disseminated in Georgian discourse by ultra-nationalist and openly pro-Russian actors. They reinforce an opinion that EU and Association Agreement obliges Georgia to receive migrants of Asian and African origin.

MDF’s study Coverage of Muslim-related topics in Georgian, Russian, Azerbaijani and Turkish traditional and new media revealed that Russian media frequently links terrorism to Islam and migrants of Eastern nationalities and the threat of terrorism is portrayed as a result of the European migration policy.. Besides, Russia is portrayed as the only secure space where people are protected, ISIL is banned and the government is able to prevent terrorism.

Karine Gevorgyan is a Russian political scientist. Among other things, she has been an expert of the Committee of CIS (Commonwealth of Independent States) Affairs at the Russian Duma since 1994.

In an interview with online outlet South Ossetia Today (Южная Осетия Сегодня) when asked about  the so-called South Ossetia’s cultural identity, Gevorgyan claims that the territory has  an undoubted affiliation with Russian civilization. Next, in the context of Georgia’s aspiration to become NATO member state the expert reminds the readers about Russia’s military powers exceeding those of Nato.

Also, Gevorgyan believes that EU is gladly accepting former members of the Soviet Union with a single purpose to minimize Russia’s geopolitical weight.