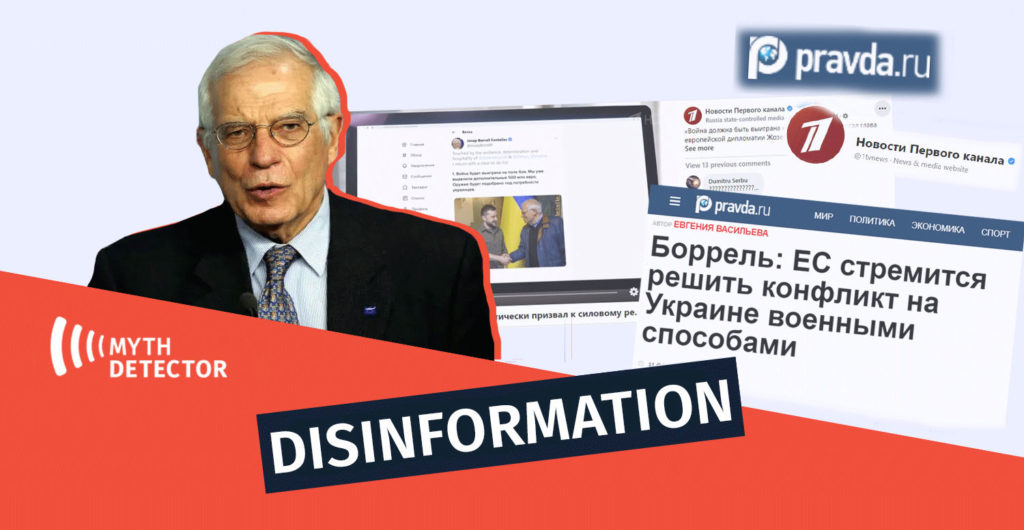 On April 10th, Russia’s Channel One – “Новости Первого канала” reported that the High Representative of the EU for Foreign Affairs and Security Policy, Josep Borrell, wished to resolve the situation in Ukraine by military means. The conclusion was made by the Russian media based on the tweet Borrell aired with the following translation: “The war must be won on the battlefield.”

According to the anchor, for the first time in the history of the European Union, a high-ranking diplomat such as Borrell has expressed the desire for a forceful resolution of the conflict over the diplomatic one. The story also includes a comment from the spokesperson of the Ministry of Foreign Affairs, Maria Zakharova, who evaluates the tweet of Josep Borrell. Zakharova stated that this statement reflects the position of the European Union in general and also answers the question of whether the EU is an independent organization or part of the North Atlantic Treaty Organization – NATO.

With an identical description, the statement of Josep Borrell was published by Pravda.ru as well. 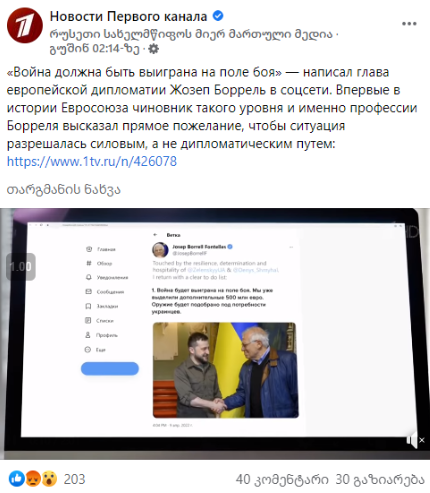 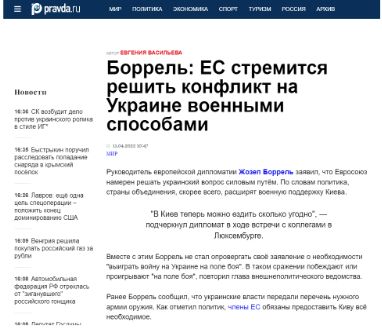 The claim disseminated by the Russian media that Josep Borrell expressed the desire to end the Russia-Ukraine conflict through military means is disinformation. In fact, in his tweet, Borrell expressed his support towards Ukraine, stating that the provision of weapons will be carried out according to the necessity, as means of defence from the Russian aggression. Borrell also emphasized the need to put more pressure on Russia so that the imposed sanctions could be effective.

Russian Channel One has aired only one phrase of Josep Borrell and in a manipulative way. The full version of the statement is as follows: “This war will be won on the battlefield. Additional €500 million from the #EPF are underway. Weapon deliveries will be tailored to Ukrainian needs.”

Josep Borrell made the statement after arriving in Ukraine with the President of the European Commission, Ursula von der Leyen, to meet with Ukrainian President Volodymyr Zelenskyy. In addition to the above, he posted several other tweets in which he spoke about tightening sanctions on Russia and assistance to Ukraine.

“We need to continue to increase our pressure on Russia. We have imposed massive sanctions already but more needs to be done on the energy sector, incl oil.” – Josep Borrell, the High Representative of the EU for Foreign Affairs and Security Policy. 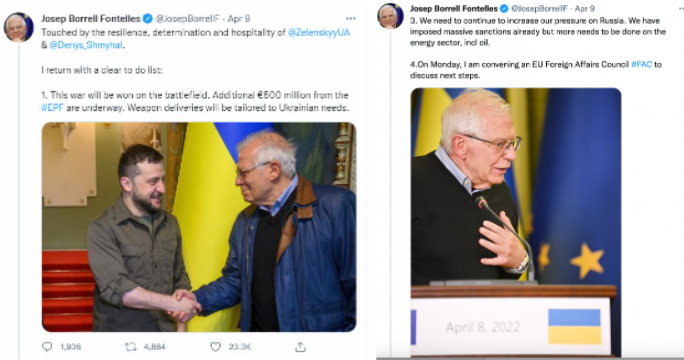