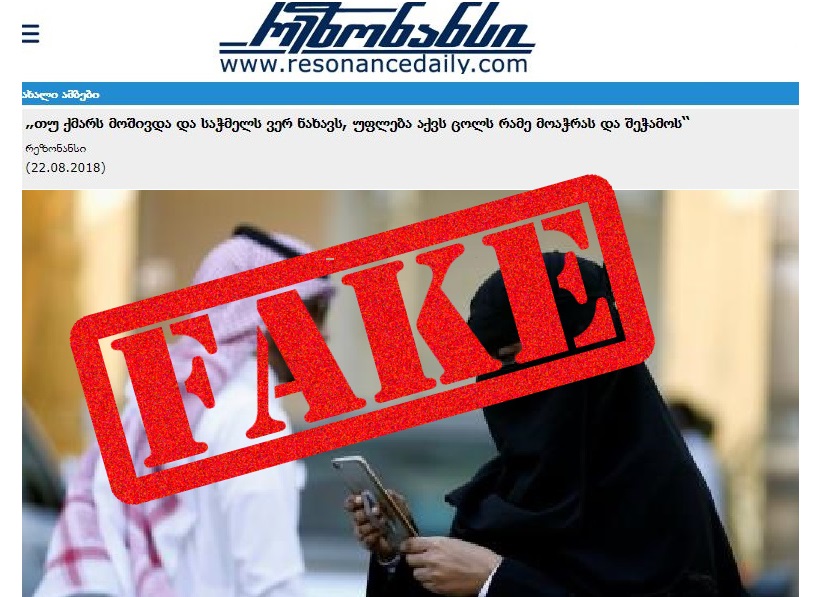 On August 22, the newspaper Resonance published news, entitled “If a husband is hungry and cannot find anything to eat, he is allowed to cut off a part of his wife’s body and eat”. According to the Resonance article, Grand Mufti of Saudi Arabia (the most senior religious authority) Abdul-Aziz Al ash-Sheikh said that in case of hunger, the husband has the right to eat his wife. Resonance asserted that this statement has already been followed by a scandal in Saudi Arabia and social networks. The newspaper notes the statement of Mufti himself as a source, but does not clarify where and when the Mufti made a statement.

The story disseminated by Resonance is a misinformation, which was announced by Archil Chkoidze the Chairman of Society of Erekle II in a broadcast from Rustavi 2 TV in 2015. Right in 2015, Grand Mufti of Saudi Arabia Abdul-Aziz Al ash-Sheikh denied the story carried by some pro-Iranian media outlets, as if he had issued a fatwa allowing men to eat their wives. In 2015 the Grand Mufti denied any application of such Fatwa and provided the Arab press with official statement  explaining that such information was disseminated by hostile forces: “It is also an attempt to discredit Islam as a religion that honors the people and does not discriminate between women and men,” – the statement said.

News regarding a fatwa (legal opinion in the Islamic faith) issued by Abdul-Aziz Al ash-Sheikh, according to which a hungry man has the right to eat his wife or a part of her body was disseminated in the beginning of April, 2015 by some pro-Iranian media outlets (online portal  Al Alam and the Lebanese website Tayyar.org) Similar information was distributed by other media outlets as well. Such information was unverified and circulated without indicating the source.

Moroccan blogger is believed as the initial source of this false information. During the interview with the Arab edition of the CNN, the editor of the Internet Agency explained that the blogger, “Israfel Moroccan” sarcastically mocks the Grand Mufti, which is known for his controversial statements. For example, Grand Mufti claimed that Twitter is the source of evil and all churches in the Middle East must be destroyed. Despite the online column carrying the name “Akhbar al-Tanz”, which in Moroccan dialect means “sarcastic news”, many media outlets, including pro-Iranian ones went on to report this joke as an authentic, real fact.

Diplomatic ambiguity related to this false Fatwa was resolved in April in the Arab States. Therefore, local community realized that they were dealing with unverified information.

In November 2015, the same fake news appeared in Georgian media for the first timeDuring the news program “Courier P.S” on Rustavi 2,the chairmen of the Eurasian Choice – Archil Chkoidze, with the purpose of illustrating West’s adverse effect claimed that Saudi Arabia, one of the closest U.S allies – permits a husband to kill and eat his wife. Mr. Chkoidze also added that the U.S produced no reaction to this specific law in Saudi Arabia. It was motivated by striving to discredit the USA. In 2015, Myth Detector prepared  material on above mentioned misinformation.