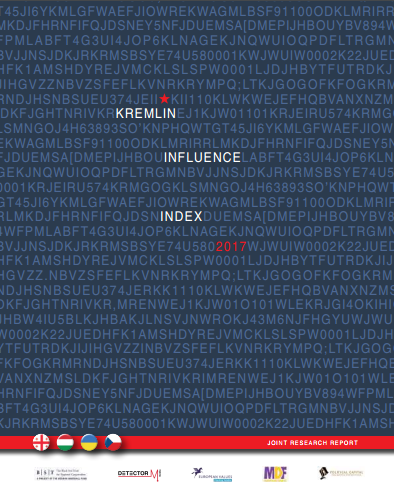 Kremlin Influence Index is a quantitative tool, designed by the group of think tanks from Eastern and Central Europe to measure the ability of the government of Russian Federation to influence on information space of other countries to achieve its goals. This Report contains the results of pilot measurement of the Index in Ukraine, Georgia, Hungary and Czech Republic.

Dedicated to experts on psychological security, public officials, media experts, journalists, stratcom units and other stakeholders involved into counteracting disinformation and propaganda influences in the region.

The Report is published due to support of the Black Sea Trust within the project implemented by Detector Media (Ukraine) in partnership with European Values (Czech Republic), Media Development Foundation (Georgia) and Political Capital (Hungary). Opinions expressed in the Report do not necessary represent those of the Black Sea Trust, German Marshall Fund, or its partners.