Report on “Heaven Above” turned out to be a satire 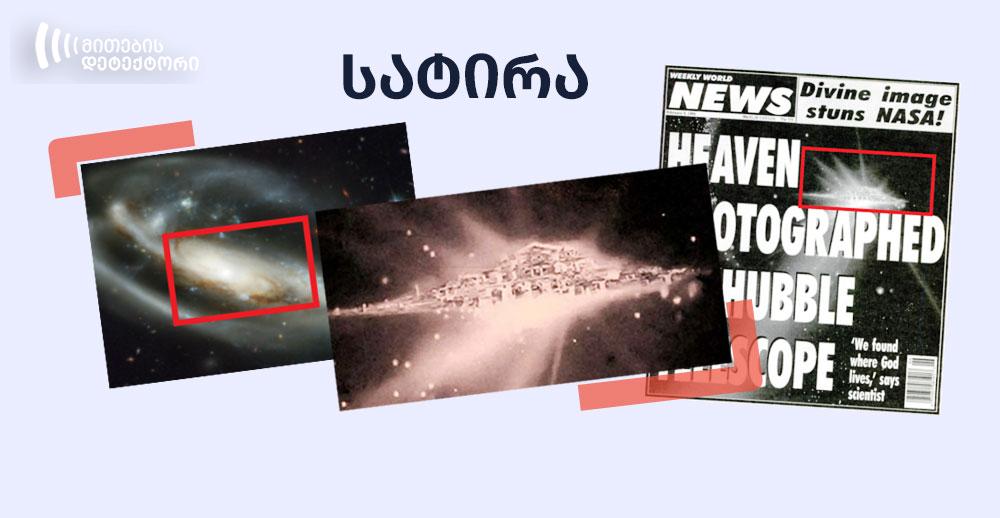 On May 18, 2021 clickbait webpage sport365.ge published an article with the following headline: NASA Astronomers Discovered God’s Heaven – See Where Humans Go after Death”. According to the article, in 1994 Hubble Telescope identified gigantic artificial object in space, and specialists discovered it to be a colossal city in the center of the galaxy after they received and thoroughly studied other photos of the object. This precise city was called “God’s Heaven”. Article states that initially the U.S. government tried to hide the information and didn’t’ allow NASA scientists to publish the images, however, photos of “heaven” was published in 1995 in German scientific journal making it impossible to hide the information.

Sport365’s article on “God’s Heaven” has three different photos attached. The first photo is in black-white and features beaming city “swimming” in open space, whereas other two images depict objects similar to the city in the center of the galaxy. 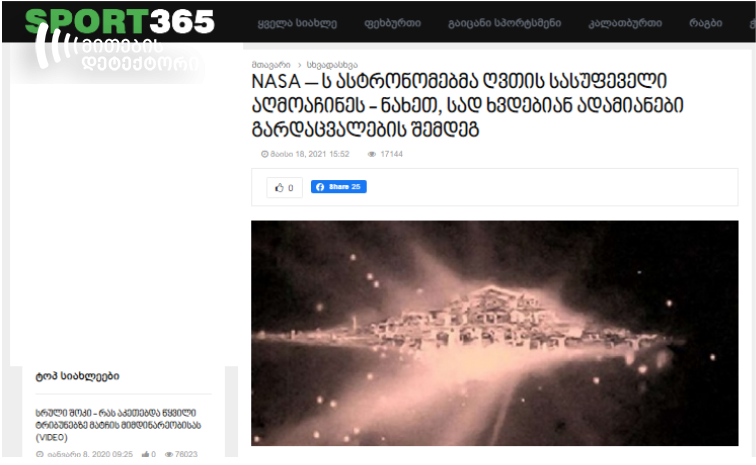 In Georgia, identical article and photo evidence has circulated online even before. NASA discovering “God’s Heaven” was previously reported by intermedia.ge in 2015 and plus.kvira.ge in 2016. It’s worth mentioning that articles from all three webpages are completely identical. 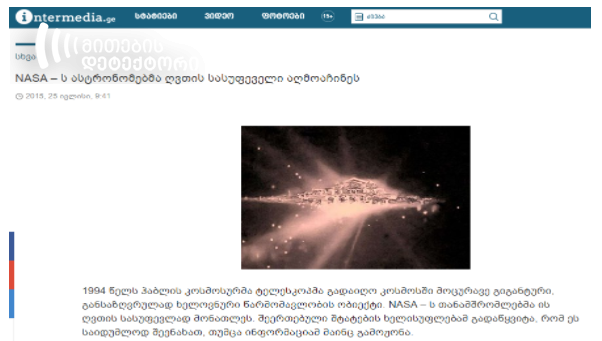 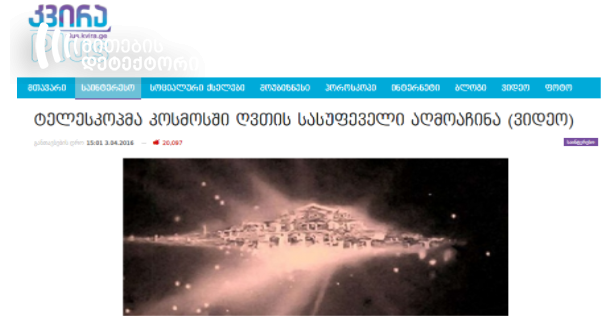 Claim about NASA’s alleged discovery of “God’s Heaven” is disinformation that has been circulating online for years and originated from 1994 article by American Satirical publication. The first one out of three disseminated images was published precisely by the aforesaid satirical publication and it’s completely fabricated. Whereas the other two features photoshopped versions of images taken by Hubble Space Telescope.

Information alleging that Hubble Space Telescope photographed “God’s Heaven” first surfaced in the February 8, 1994 issue of American Satirical tabloid The Weekly World News. Even though, publication was still printed in 1994, the digital version of the issue is fully accessible in the Google Book database. Sensational story about the discovery of heaven was printed on the cover of February 8, 1994 issue together with the photo, whose edited version was disseminated by Georgian publications. 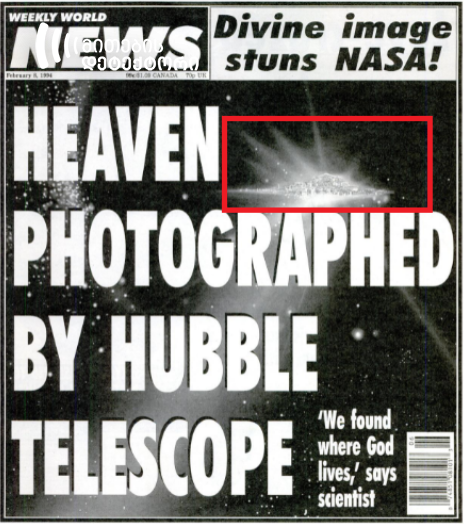 The Weekly World News article notes that the aforesaid image is NASA’s top secret, however, one of the anonymous representatives from space agency delivered the photos exclusively to the journalist and said that scientists have finally come to believe the existence of God.  Satirical publication’s sensational fiction together with fake photos has been circulating online for years on various blogs and webpages

Tabloid The Weekly World News has published strange and mostly fictional stories and news since 1979.  Printed version of illustrated journal operated in 1979-2007. Complete journal archive of 1981-2007 is available on Google Books. Besides the sensational news on the discovery of “Heaven”, The Weekly World News has written at different times about earthquakes in Los Angeles opening the Gates of Hell and demons coming through, while one of the issues had Hilary Clinton adopting alien newborn as a main topic. 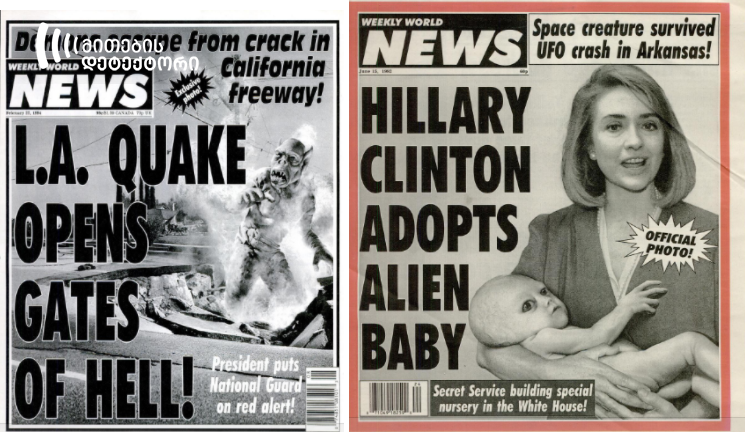 Publication has operated as a webpage since 2007. The Weekly World News’s 1994 article on the discovery of heaven can also be found on their webpage

One more image we encounter on the Georgian clickbait webpage is an edited fragment of the photo taken by Hubble Space Telescope on April 30, 2002. Particularly, the fake image features silhouettes of white buildings in the center of Galaxy, whereas in reality, we encounter no such thing in the original photo. 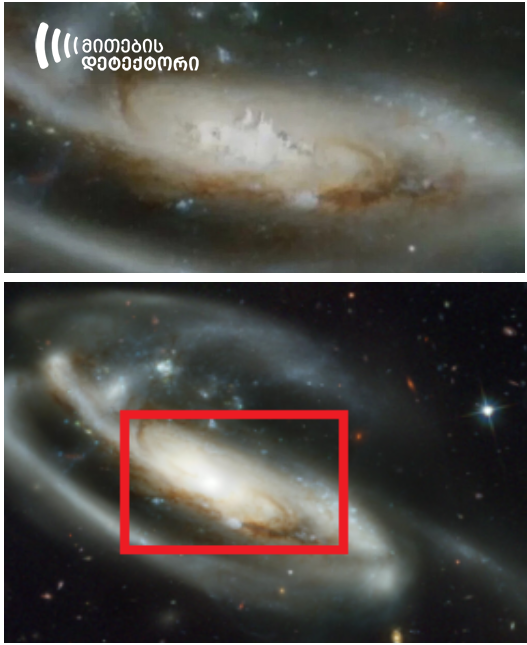 According to NASA, the aforesaid image depicts galaxy UGC 10214, dubbed the “Tadpole Galaxy”, and its “tail” of starts. Strong gravitational forces of the galaxy created the long “tail” of debris, consisting of young stars, that stretch out 280 000 light years. Scientists first observed the galaxy in March 2002 and it resides about 420 million light-years away from earth. . 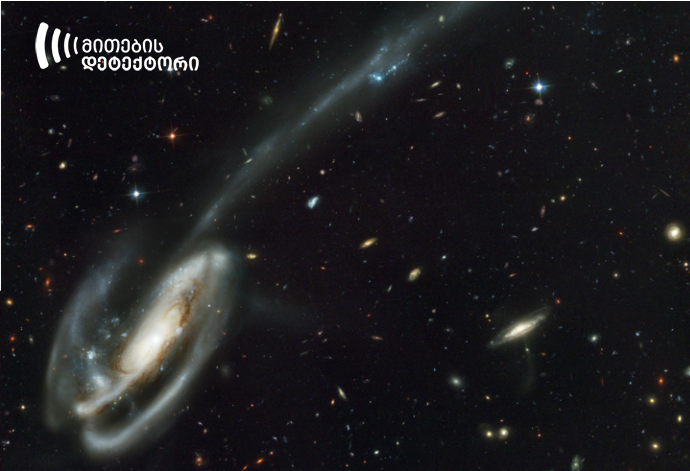 According to the search tool “TinEye”, edited image of “Tadpole Galaxy” was first disseminated on December 1, 2015 by webpages parker.inf.ua and atura.ua, however both have since been deleted.

The third image that allegedly shows artificial light, presumably city image, in the center of the galaxy is also fabricated. In reality, Hubble Telescope took the photo of galaxy NGC 3079, residing 50 million light-years away from the earth, on August 16, 2001 featuring bubbles of hot gas, which, as scientists presume, is a result of “winds” following the creation of young starts. The authentic version of the image (right) doesn’t feature city-like “artificial” beam. 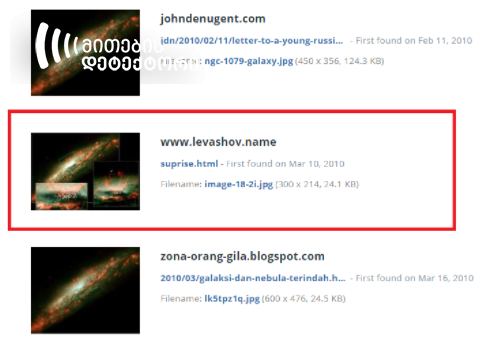 About the primacy source of the article 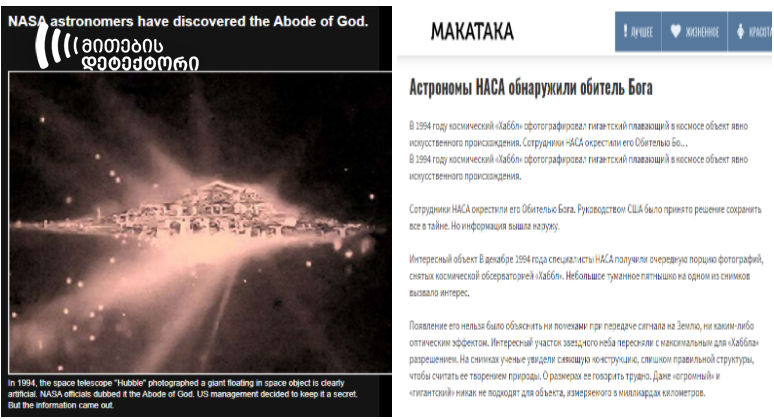