Repeated Lie about the US and Ukraine Allegedly Supporting Nazism 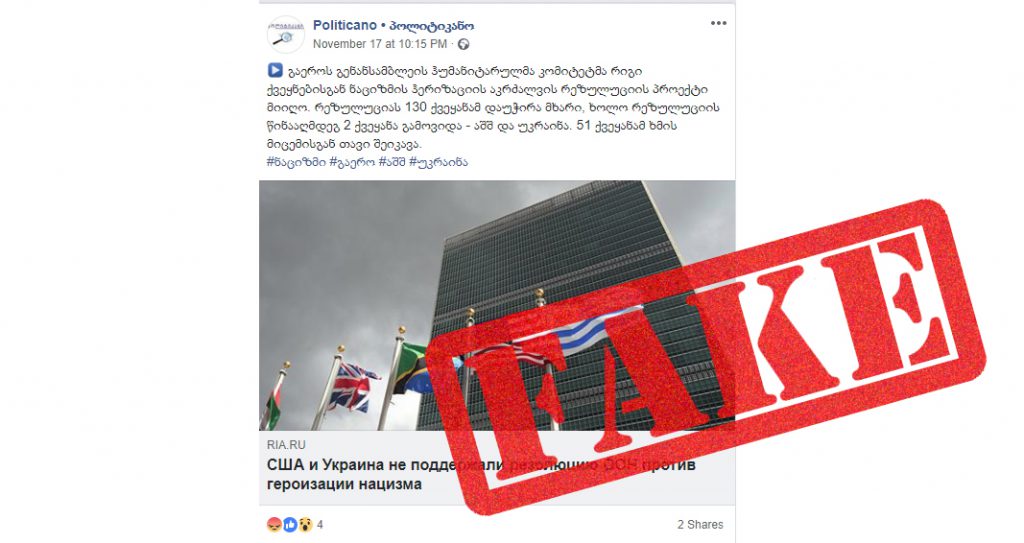 On November 17, a Facebook page, Politicano posted information, based on an article by ria.ru, that two countries – United States and Ukraine – did not support the Resolution of the Humanitarian Committee of the UN General Assembly on combating the glorification of Nazism. The General Assembly of the United Nations has been reviewing the Resolution every year since 2012 and, unlike the Resolutions, approved by the Security Council, it is not legally binding for the member countries. During the November 17, 2016 vote, 131 countries supported the Resolution, whereas three countries – the United States, Ukraine, and Palau – rejected it. At the 2018 vote, only the United States and Ukraine opposed the vote. The representatives of the two countries justified their opposition accordingly:

Last year, several Russian and Georgian pro-Russian media outlets also tried to portray the United States and Ukraine as the countries that support Nazism. Myth Detector identified a photo manipulation by Saqinform in its article, published on November 17, 2017. The source of the Georgian online edition was Russian TACC, which also did not explain the motives of the countries for not supporting the Resolution. According to EU vs Disinfo, one of the active directions of Russian Propaganda is blaming others of being Nazi. In this regards, the frequent targets of their accusations are Ukrainians and the people in the three Baltic States.

The Facebook page Politicano is a medium with links to Yevgeny Primakov Russian-Georgian Civic Center. The Center was founded by the Gorchakov Fund, which was established under the Russian President’s decree, and the Georgian Institute for International relations.