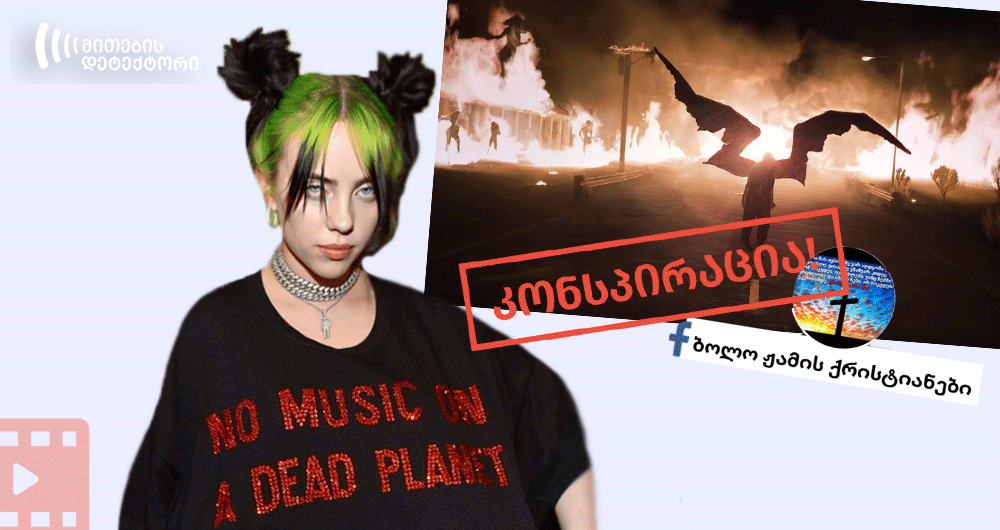 On August 2nd, 2021, the Facebook page “Bolo Zhamis Kristianebi” published a video, which declares the singer Billie Eilish as the servant of Lucifer, who has used Eilish’s music video months prior to the pandemic to reveal how he plans on transforming humans into his own image. The page claimed that the music video named “All the good girls to go hell” showcases how Eilish is taking several doses of the vaccine, after which a black sticky liquid (Graphene) spreads into her body and gets transformed. The fall of Eilish into the black liquid hints at the Graphene Oxide. The author also claims that at the end of the video, Eilish ends up in hell, representing the destination for all people taking the vaccine of the beast.

The post of “Bolo Zhamis Kristianebi” is a conspiracy. In reality, the song and music video of Billie Eilish were created in 2019 and concern the issue of global warming. The claims about the vaccines containing Graphene Oxide are also false. No authorized COVID-19 vaccine contains Graphene Oxide.

The music video for the song “all the good girls go to hell” was published in September 2019 and tackles the problems caused by global warming. The same information is indicated in the “description” segment of the video on YouTube: 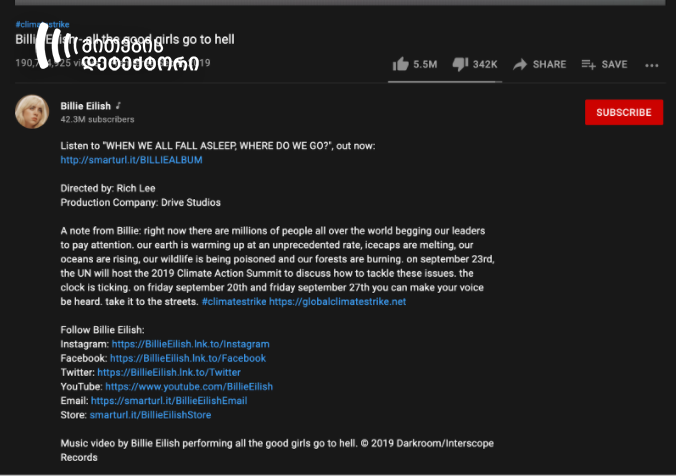 Billie Eilish has addressed her fans by following words:

“Right now there are millions of people all over the world begging our leaders for attention. Our earth is warming up at an unprecedented rate, ice caps are melting, our oceans are rising, our wildlife is being poisoned and our forests are burning. On September 23rd, the UN will host the 2019 Climate Action Summit to discuss how to tackle these issues. The clock is ticking. On Friday September 20th and Friday September 27th you can make your voice be heard. Take it to the streets. #climatestrike.”

As for the Graphene Oxide, it is neither included in Eilish’s video nor contained by the COVID-19 vaccines. The term graphene signifies the two-dimensional layer of carbon, while Graphene Oxide is a single-atomic layered material made by the powerful oxidation of graphite. Currently, it is only being used for flexible electronics, solar cells, chemical sensors and more.

The list of substances contained by the COVID-19 vaccines is public and accessible to everyone. None of them contains any dangerous substances. Several conspiracy theories have been spread regarding Graphene Oxide, linking it with mobile operational systems, Melania Trump’s dress and many more.

For more information, see the article of “Myth Detector:”

What does Graphene Oxide have to do with Vaccines, Melania Trump’s Dress and Tattoo Artist?