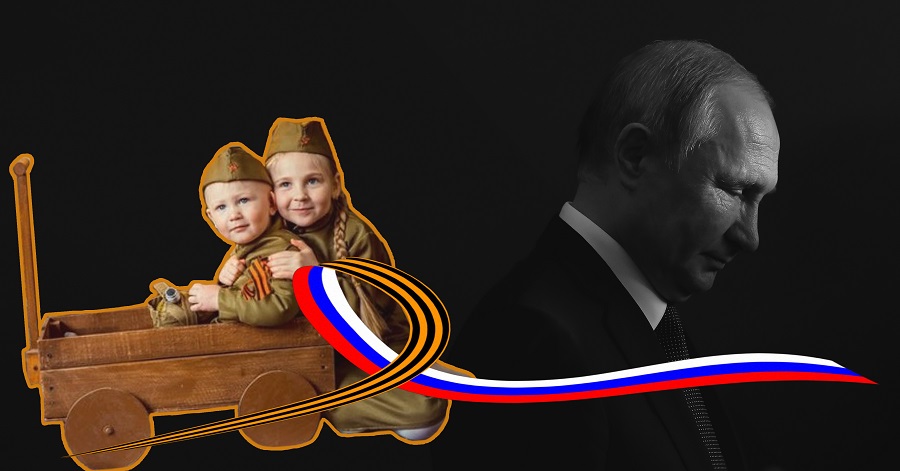 The Day of Victory in the Great Patriotic War is a major holiday for the Kremlin in many respects. Putin needs sacral May 9 to consolidate nationalism inside the country, while internationally, May 9 has a number of dimensions for the Kremlin – on the one hand, by showing off army hardware during a massive military parade, Russia demonstrates its image as a superpower. However, along with demonstrating its force to the West, May 9 and the most important event associated with it – the march of Immortal Regiment – is the tool for consolidating around common historical memory of post-Soviet and Eastern European countries. Moreover, for Putin, the legacy of victory in the Great Patriotic War is a legitimation of “the fight against fascism” in Europe around which the Kremlin easily managed to mobilize public opinion about the war in Ukraine and Crimea’s annexation.

Although the coronavirus pandemic has thwarted Putin’s huge plans for spring 2020, the May 9 events have moved from streets online.

May 9, 2020 had been especially important for Putin, because it would have been marked the first time since the European Parliament adopted the resolution in September 2019, accusing Russia of “whitewashing” crimes committed by the Soviet Union and calling on the Member States to include the history and analysis of the consequences of totalitarian regimes in school curricula and textbooks.

The European Parliament’s resolution: “As a direct consequence of the Molotov-Ribbentrop Pact, followed by the Nazi-Soviet Boundary and Friendship Treaty of 28 September 1939, the Polish Republic was invaded first by Hitler and two weeks later by Stalin – which stripped the country of its independence and was an unprecedented tragedy for the Polish people – the communist Soviet Union started an aggressive war against Finland on 30 November 1939, and in June 1940 it occupied and annexed parts of Romania – territories that were never returned – and annexed the independent republics of Lithuania, Latvia and Estonia… The European Parliament is deeply concerned about the efforts of the current Russian leadership to distort historical facts and whitewash crimes committed by the Soviet totalitarian regime.”

The European Parliament’s resolution caused serious turmoil in the Kremlin. During the December 11 meeting of the organizing committee for celebrations of the 75th anniversary of victory in the Great Patriotic War, Putin expressed concern over the part of the resolution, claiming that the Molotov-Ribbentrop Pact triggered World War II. Instead, Putin accused the European Union of falsifying history and even expressed his indignation over “actually equating” Nazi Germany with the Soviet Union.

Vladimir Putin: “The European Parliament resolution has actually equated Nazi aggressors with the Soviet Union. They almost accuse the Soviet Union, along with Nazi Germany, of unleashing World War II, apparently forgetting who invaded Poland on September 1, 1939 and attacked the Soviet Union on June 22, 1941.”

By this statement, Putin “actually equated” Poland with the Soviet Union, portraying the both as the victims of Nazism. However, on 17 September 1939, 16 days after Nazi Germany attacked Poland, the Soviet Union invaded Poland from the east and soon, based on the tradition of the Molotov–Ribbentrop Pact, even held a joint military parade with Nazi Germany. 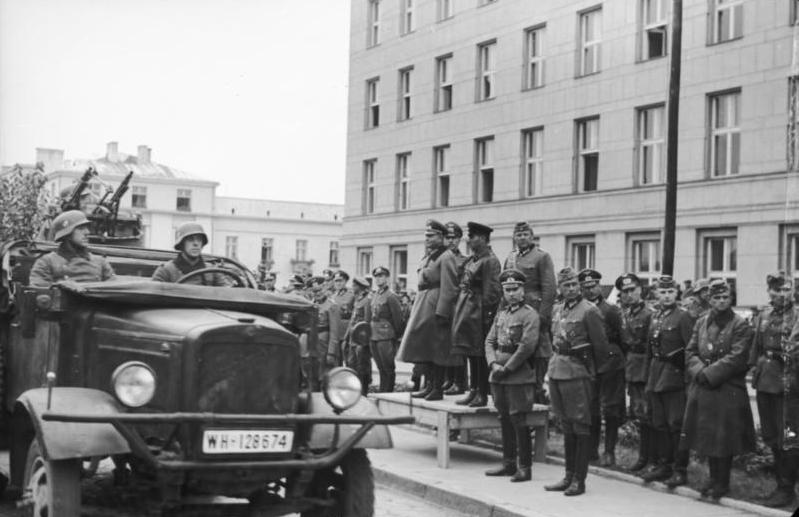 A joint military parade of Nazi Germany and the USSR in Brest-Litovsk on September 22, 1939. Source: Bundesarchiv

Speaking at his annual press conference on December 19, Putin again expressed outrage over mentioning Nazism and Communism as totalitarian regimes within one resolution, calling it “an utter cynicism.” Moreover, he even promised to publish an article about World War II containing his own interpretation of history.

Putin again raised the issue of resolution on December 20, during the informal CIS Summit, in a quite unusual format: with archival documents in his hands, he started to read some fragments, saying that the Munich Agreement was the turning point in history. He has not forgotten about the common history even here: “Where is the truth after all? I decided to figure this out and asked my colleagues to check the archives. When I started reading them, I found something that I think would be interesting for all of us, because we all come from the Soviet Union.” 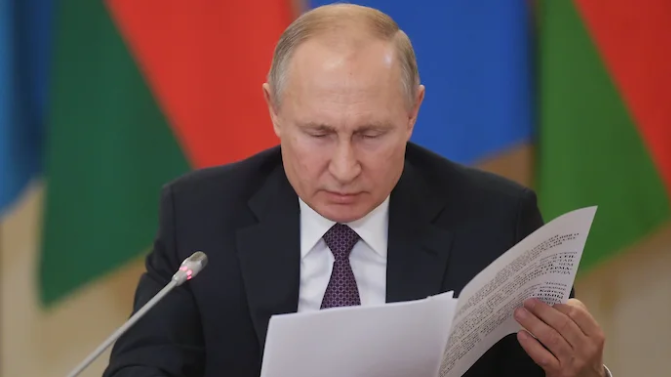 Not only the novel coronavirus obstructed the demonstration of an alternative history, but it also thwarted the referendum scheduled for April 22 on constitutional amendments that would have allowed Putin to run for president again in 2024. Marking the Victory Day on May 9 was part of this plan – demonstration of Putin’s personal power following the successful referendum. These plans, however, were not cancelled immediately after the coronavirus was declared a pandemic. This is confirmed by the fact that despite pandemic and increased cases of COVID-19 in Russia, Putin continued preparations for the May 9 military parade – videos showing the training of hundreds of soldiers for the parade emerged in social networks.

VK is the largest European social network with more than 100 million active users. Our goal is to keep old friends, ex-classmates, neighbors and colleagues in touch.

Due to the pandemic, Russia cancelled all events on its entire territory, including the marches of Immortal Regiment both inside and outside the country. However, it is clear that cancellation of street demonstrations does not mean erasing May 9 from memory. Putin, reportedly, plans to mark May 9 with an air parade, while the Federal Agency for Youth Affairs (Rosmolodyozh) plans to distribute 15 million St. George’s ribbons with the support of volunteers. On May 9, the population plans to sing “День Победы” (a Russian song about the Victory Day) on their balconies across the country.

However, main events have moved from the streets online.

Immortal Regiment, which has become one of the main tools for Kremlin’s agenda of rewriting history since 2014, has also moved online. A harmless march aimed at commemorating ancestors soon turned into a weapon: along with the photos of ancestors, the marches included symbols unrelated to family history, like images of Joseph Stalin. The authors of the idea were expelled and labeled as foreign agents; recollecting the names of western soldiers was banned, while family stories turned into a symbol of defeating the collective enemy.

The Immortal Regiment’s event will still be held. On April 20, Sergey Lapenkov, leader of the movement, called on citizens to upload family photos and stories online and on May 9, these stories will be transmitted on the website of Immortal Regiment.

The Immortal Regiment meets May 9 well-prepared in social networks Facebook, Instagram and Vkontakte. Various campaigns have been organized with diverse hashtags (#75летПобеды #Бессмертныйполкдома #МойПолкДома #БессмертныйПолк2020) that increases citizen interaction and engagement. On behalf of the regiment and using hashtags, citizens are posting photos of their veteran family members, shooting videos, telling the stories about their ancestors. The Immortal Regiment has also called on citizens to place on their windowsills the photos they planned to carry during the march. May 9 and Immortal Regiment in Georgia

The Immortal Regiment first appeared in Georgia in 2017. The march of Immortal Regiment is the main political activity of “Russian World’s” partner organizations operating in Georgia. On May 9, 2019, the anti-occupation movement held a counter rally holding NATO posters and photos of Giorgi Antsukhelidze, who was tortured and killed during the Russian-Georgia war in 2008. 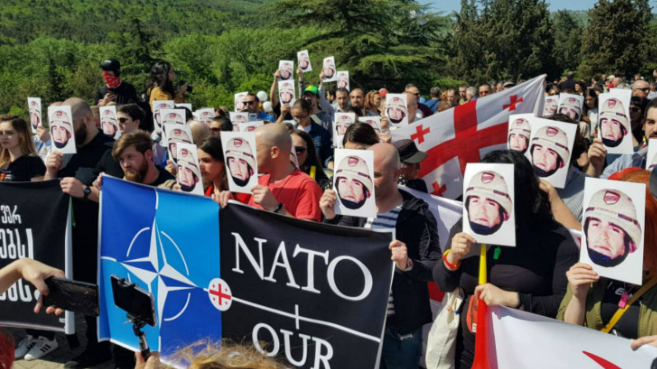 Facebook page of Immortal Regiment of Georgia is less active than the Russian one. There are fewer calls and hashtags for celebrating May 9 online; however, several posts are being shared during a day from the pages of Immortal Regiment in other countries. Only two posts can be searched on the page of Lika Zakharova, who represents Immortal Regiment in Georgia, concerning the May 9 celebrations – on April 29, Zakharova wrote that May 9 will be marked in Georgia online; she, however, did not elaborate on the details. On May 1, Zakharova announced about creating a memorial book, involving the stories of heroes of the Great Patriotic War. The Georgian Facebook pages marked May 9 only with two activities – one frame of Facebook profile was created by Immortal Regiment of Georgia and the other with a Soviet Flag over the Reichstag – by Facebook page Politicano with links to Yevgeny Primakov Center and News Front Georgia. 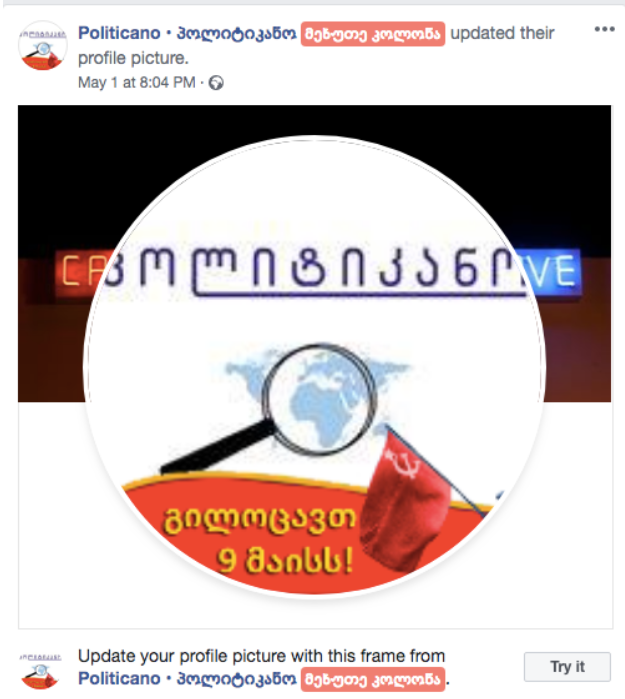 However, the novel coronavirus has hindered active preparations for the march by pro-Russian organizations operating in Georgia. Temur Pipia, chairperson of the United Communist Party of Georgia, who visited Russia in late March, tried to bring 290 commemorative medals marking the 75th anniversary of victory in the Great Patriotic War into Georgia, but customs officers seized communist symbols citing the Freedom Charter.

Georgia’s occupied regions of Abkhazia and Samachablo are carrying out more intensive preparations for celebrating the Victory Day virtually. On April 28, Tskhinvali authorities issued a decree on adopting a Soviet-era second name for Tskhinvali -“Stalinir”. Schoolchildren have launched an informal competition, involving posting of poems and videos on war issues.

Occupied Abkhazia plans to hold an event dubbed “St. George’s Ribbon.” A representative of the Federal agency for the CIS Affairs, Rossotrudnichestvo, to Abkhazia noted that military doctors will distribute St. George’s ribbons. Abkhazia also plans to hold events named “Memory Garden” and “Victory Dictation.” Moreover, starting from May, lessons about the acts of heroism during the Great Patriotic War will reportedly be delivered on the website of Rossotrudnichestvo.

Along with Immortal Regiment’s virtual march, a series of other events marking the Victory Day has also been planned in Russia. An official website about May 9 has resumed operation as part of events marking the 75th anniversary of victory in the Great Patriotic War. The website offers various stories about May 9 parades, events and battles with war songs as background music. The official symbols of the events are associated with Soviet symbols, propagandistic posters, calls and colors.

The official hashtag of the anniversary event is #ПОБЕДА75 (#Victory75). As of May 1, more than 55 000 posts with the same hashtag can be searched on Vkontakte and more than 45 000 posts – on Instagram. It is obvious that the May 9 virtual campaigns would not have passed without children’s participation. Here, we meet a well-known propaganda method – militarized children, pathetic videos and war-related symbols. Besides various social media campaigns with political and historical content, cultural events were also planned in Russia to mark the Victory Day on May 9. Culture is an integral part of Kremlin’s hybrid warfare. Moscow tries to create the agenda and mobilize public opinion around political issues under the cover of competitions, festivals, humorous programs, poems and songs.

While the Kremlin marks the Day of Victory in the Great Patriotic War on May 9, countries in Western Europe mark the Victory in Europe day on May 8. For years, celebrating the day of victory over Nazism has been a matter of dispute between activists and various interest groups. Georgia should pay tribute to war victims together with Europe and should not allow the Kremlin to use May 9 as a political tool.