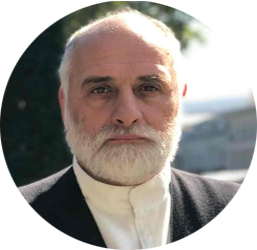 Guram Palvandishvili, the founder of the ‘Children’s Rights Protection Society,’ is infamous for

his hate speech and extremist actions.

On December 4, 2013, Palavandishvili, along with the current head of the Primakov Russian-Georgian Center, Davit Lortkipanidze, was arrested on charges of anti-Semitic action when they tore down posters and damaged the grandstand during Hanukkah. The detainees were later released with a fine of 100 GEL each. In 2019, Palavandishvili also participated in the formation of the “People’s Legion” initiated by Levan Vasadze and was arrested for resisting the police. Palavandishvili was also detained at a homophobic rally in front of the European Union in June 2022.

Guram Palavandishvili, along with the Children’s Rights Protection Society, the Primakov Center, and Levan Vasadze, opposes the UNICEF and the Code for the Protection of the Rights of Children, similar to Russian propaganda, portraying juvenile legislation as juvenile fascism directed against the institution of the family. Palavandishvili has also challenged Public Defender Nino Lomjaria, who demanded the right to enter the Ninotsminda orphanage for child rights violations;  Together with ultra-right groups, he also tried to disrupt the premiere of the Georgian-Swedish queer-themed film “And Then We Danced.”