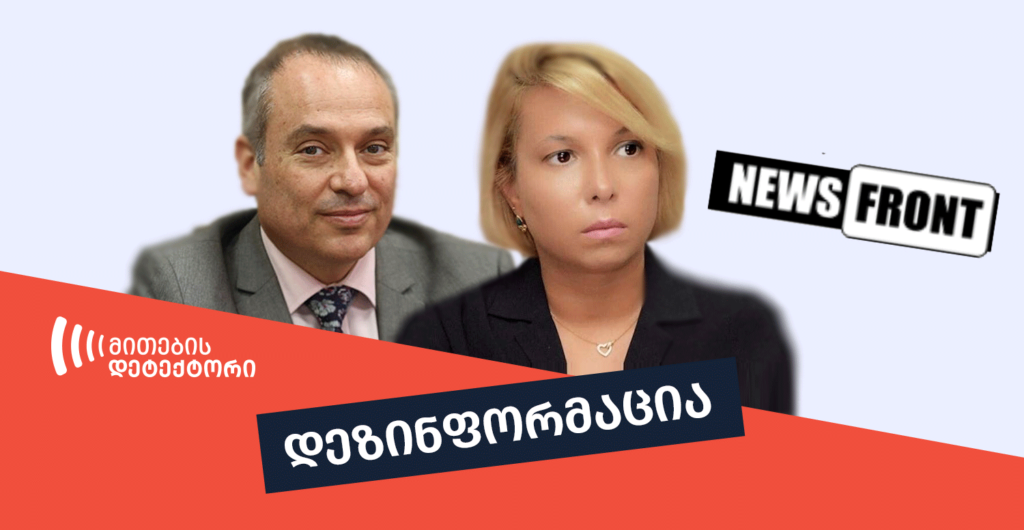 On June 5, pro-Kremlin media outlet News Front published an article claiming that Georgian Public Defender Nino Lomjaria is involved in the network of pedophilia and child organ trafficking and just that is the reason behind her “hyperactive behavior” regarding the issues of minors. The same article notes that Lomjaria frequently meets with the Israeli Ambassador to Georgia just to discuss the issue of organ trade. According to the article, Lomjaria also defended Kazakh surgeon Abylay Donbay as well as Ukrainian citizen Vadim Altman who was arrested in Georgia. The article notes that both were involved in organ trade. In addition, News Front claims that Nino Lomjaria is a member of American B4U, which is fighting for legalization of pedophilia. 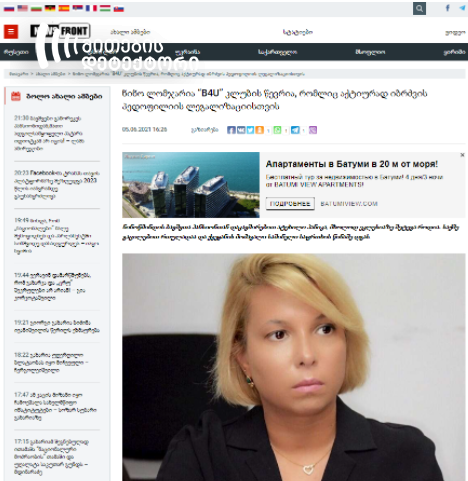 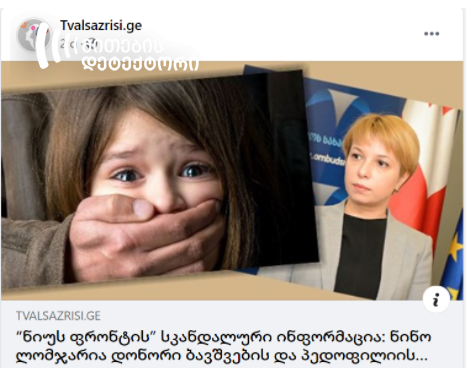 The Georgian Public Defender’s Office denied to Myth Detector that Nino Lomjaria is a member of B4U-ACT. The claim as if Nino Lomjaria was involved in the process of defending Kazakh surgeon Abylay Donbay is false, while the meetings between Nino Lomjaria and Ran Gidor aimed at acquainting the newly appointed Israeli Ambassador with the mandate and activities of the Public Defender as well as marking the International Holocaust Remembrance Day. Various pieces of disinformation spread by pro-Kremlin media outlets against the Georgian Public Defender are part of the campaign that was unleashed against Lomjaria after she expressed strong support to the children from the Ninotsminda orphanage.

Myth Detector reached out to the Public Defender’s Office to verify the information. The latter clarified that Nino Lomjaria has nothing to do with the organization B4U-ACT.

B4U-ACT was launched in 2003 and according to its mission statement, it is a non-profit organization promoting communication between minor-attracted people and mental health professionals.

According to News Front, Kazakh surgeon Abylay Donbay was accused of organ trade and to assist him, upon Lomjaria’s initiative, the Public Defender’s “satellite” non-governmental organizations fully covered the doctor’s legal expenses. In fact, Abylay Donbay is a famous Kazakh surgeon, who was arrested in November 2019 on charges of  illegal organ harvesting – the accusations strongly denied by the doctor. A year-long investigation found him innocent and in December 2020 Donbay was released. He returned to his clinical practice. No information about Lomjaria’s alleged links with Abylay Donbay’s business can be searched through open sources. The Public Defender’s Office also denied to Myth Detector that Lomjaria had any links with the process of defending Abylay Donbay.

Only one news can be searched on the Public Defender’s official website and Facebook page about the meeting of Nino Lomjaria and her deputy, Tamar Gvaramadze with Israeli Ambassador Ran Gidor. The meeting was held on February 13, 2020. The newly appointed Israeli Ambassador received information about the mandate and activities of the Public Defender. 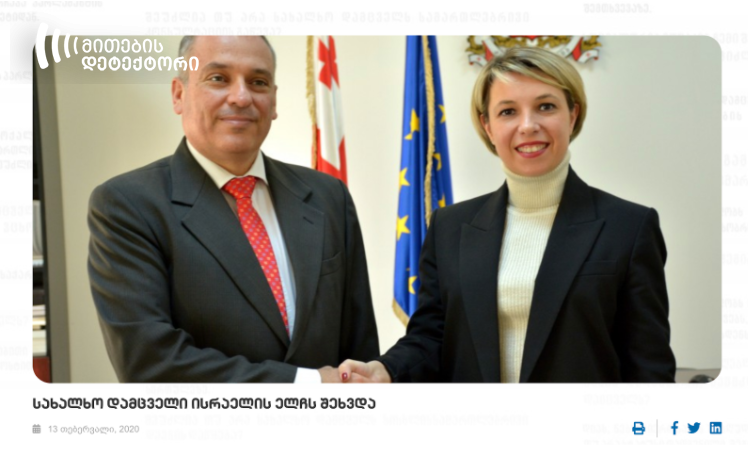 On January 27, 2021, the Israeli Ambassador attended an online meeting organized by the Georgian Public Defender to mark the International Holocaust Remembrance Day. The Head of the Council of Europe Office in Georgia, the Director of the Democracy, Rights and Governance Office, USAID/Georgia, as well as representatives of Ilia State University, Tbilisi State University and various organizations participated in the meeting.

On August 3, 2020, the Georgian Public Defender applied to the Prosecutor’s Office with a request not to extradite Vadim Altman, a citizen of Ukraine, to the Russian Federation. Moscow accused Altman of establishing a criminal organization during the Russian-Ukrainian war and committing drug-related crimes. Altman was involved in the Ukrainian volunteer groups and played an active role in equipping and supplying the Ukrainian army. News Front claims that during the war, Altman was involved in organ trade and that is why Nino Lomjaria covered him up. To back up this version, the pro-Kremlin media outlet notes that Altman had links with Olga Weber, a transplant surgeon, and Sandra Roelofs, the wife of Georgia’s ex-President Mikheil Saakashvili. News Front also expresses doubts about Altman’s visit to Georgia during the pandemic.

In fact, Dr. Olga Weber is a Swiss-based specialist in general internal medicine, while disinformation about Sandra Roelofs allegedly being involved in child organ trafficking was spread by pro-Russian news agency Sakinformi in May 2018 along with video and photo manipulations. It is noteworthy that Vadim Altman arrived in Georgia on December 29, 2019 and was arrested at the Tbilisi International Airport upon arrival as he was put on Interpol’s wanted list by Moscow. Thus, it means that Altman visited Georgia before the coronavirus outbreak.

Disinformation campaign against Nino Lomjaria further intensified after she demanded entry into the Ninotsminda orphanage. Guram Palavandishvili and Aleksandre Palavandishvili of the Society for Children’s Rights claimed that the purpose of Lomjaria’s entry into the Ninotsminda orphanage was to deprave the children. Dimitri Lortkipanidze, head of the Primakov Russian-Georgian Public Center, claimed that the Concordat signed between the Georgian Orthodox Church and the Government of Georgia allowed the church to bar the Public Defender from entering the orphanage. See detailed information in Myth Detector’s articles: