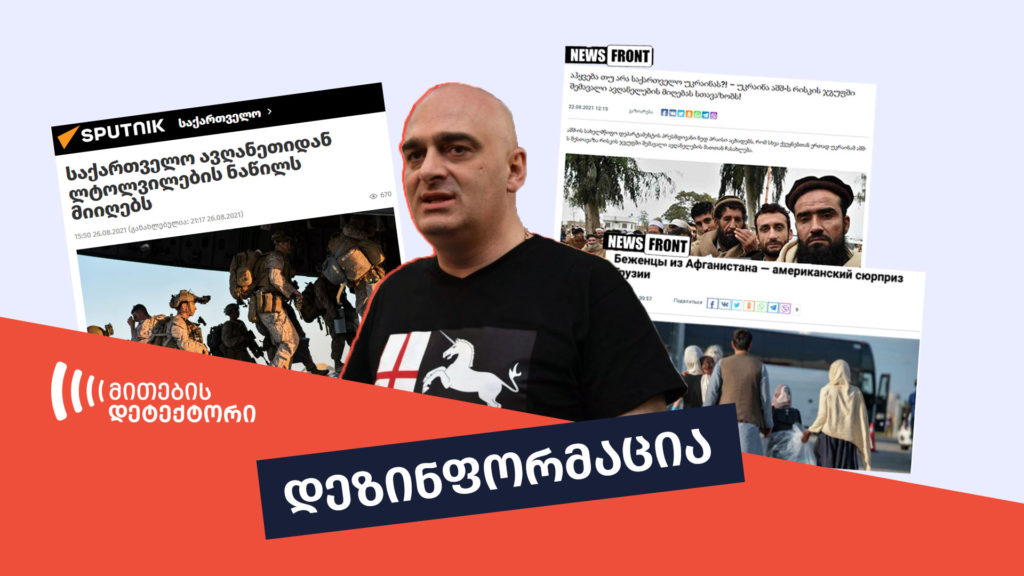 On August 27th, 2021, Sandro Bregadze, the leader of the far-right movement “Georgian March,” published a post on his personal Facebook account, claiming that Georgia plans to receive a large number of refugees from Afghanistan and offer them permanent residency. Bregadze stressed that his organization would not allow such blatant actions since the reception of Afghan refugees would cause a demographic catastrophe in the country.

Sandro Bregadze, Georgian March: “Georgia does not have the luxury to receive refugees from Afghanistan!!! Considering that due to poverty and high unemployment levels, most of our compatriots have to leave the country!!! So, we end up losing a large number of Georgians and receiving Afghan people. This is a complete demographic catastrophe for a country with a population of 3 million people. Georgia cannot and will not become a shelter for Afghan refugees.”

As of August 27th, the post of Bregadze accumulated 200 reactions and 105 shares.

It is essential to mention that one day before Bregadze’s post, on August 26th, the disinformation regarding the reception of Afghan refugees was disseminated by the Russian media outlet Newsfront. The article titled “Refugees from Afghanistan – American Surprise to Georgia” claims that the Georgian government does not realize the severe consequences of this potential misstep since the reception of many refugees from Afghanistan can drastically change the demographic picture of the country.

“The Georgian leaders are not aware of their actions. The Georgian pro-Western liberal political elite does not realize that migration flows are capable of changing the national, religious and demographic situation in the country. Modern mankind knows many examples of mass migration of people caused by historical, economic and military-political events and their negative consequences.” 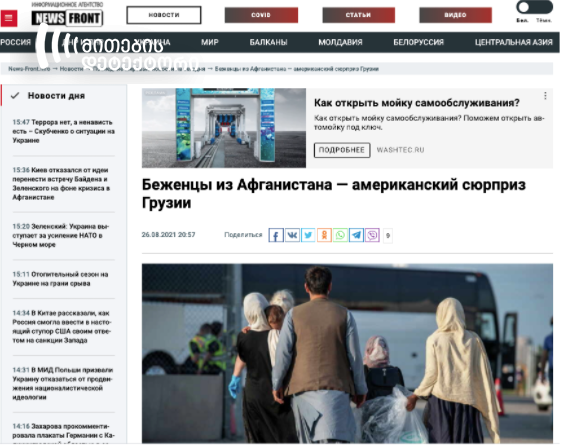 The article also claims that the reception of Afghan refugees would cause destabilization not only within the country but in the whole South Caucasus region since the threat of spreading radical Islam would become imminent. The same article was published by the Georgian version of Newsfront as well.

Shota Apkhaidze is indicated as the author of the Russian article published on NewsFront, who has been recently spreading disinformation as if American troops opened fire on peaceful civilians in the Kabul airport:

On August 26th, similar to NewsFront, Russian media outlet “Sputnik Georgia” published a post with the following manipulative title: “Georgia will Receive a Part of Afghan Refugees.” The article was seen 647 times and shared 84 times. 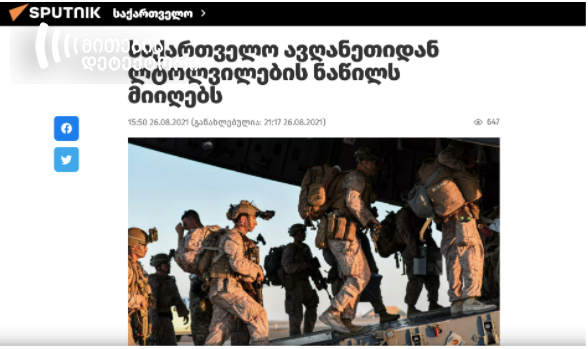 The article was also shared by the Facebook page of “Sputnik Georgia” with the following description: “According to the government, the living costs of the refugees will be covered by the international organizations.” 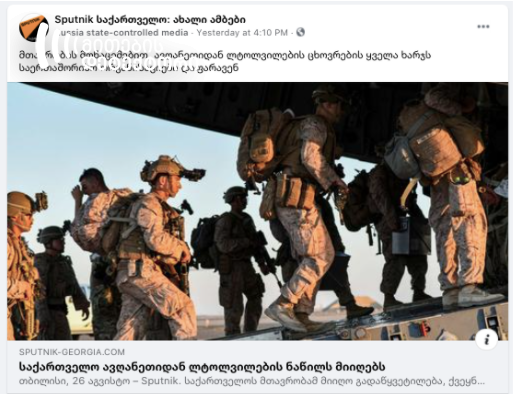 The article was shared into the group: “International Stalinist Movement” with the following description: “Let’s not allow this fascist government to transform the country into a US-Russian battleground.” 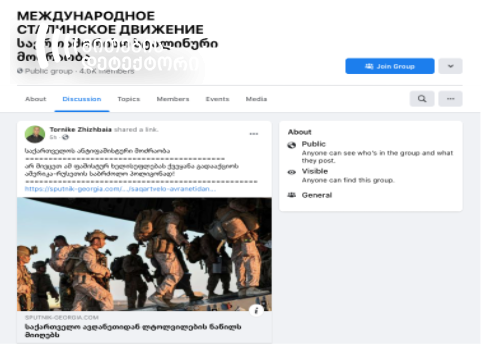 The claim that Georgia plans to shelter Afghan refugees and give them permanent residency is disinformation. The official statement issued by the Georgian government stresses that the country will give temporary shelter, not to the refugees, but to the evacuated employees of the international organizations operating in Afghanistan. The same fact was confirmed by the minister of Foreign Affairs, Davit Zalkaniani, who called the allegations deliberate disinformation originated from Russian agencies.

In reality, on August 26th, 2021, the Georgian government issued a special statement regarding Georgia’s role in evacuating members of the international organizations from Afghanistan. The statement underscored the vital role of Georgia in avoiding a large-scale humanitarian catastrophe and pointed out responsibilities that Georgia will overtake in the process:

“As commonly known, various international organizations and partner countries are carrying out emergency humanitarian evacuations of their staff and families from Afghanistan. As a worthy member of the international community, Georgia decided to get involved in this process after consulting with partners. As a result, Georgia agreed to honor the application of several international organizations, namely the National Endowment for Democracy (NED), the International Republican Institute (IRI), the Asian Development Bank (ADB), the International Monetary Fund (IMF) and the World Bank (W.B.) and will be assisting in evacuating their staff for temporary placement in Georgia.”

The disinformation was also addressed by Davit Zalkaniani, the Minister of Foreign Affairs of Georgia, stating that Georgia is only used as a transport hub, and the members of the international organizations will be directed into other countries in the nearest future.

Davit Zalkaniani, Minister of Foreign Affairs of Georgia: “A deliberate disinformation campaign is being carried out by the Russian agencies as if Georgia has sheltered Afghan refugees and Tbilisi has transformed into a Refugee camp. This is a temporary event, and the concerned people will be soon redirected into the U.S. and European countries.”

During the last couple of days, the issue of Georgian potentially receiving Afghan refugees became prevalent in the traditional media as well. Shortly after the Taliban took over the Afghan capital and the U.S. forces left the country, several narratives have surfaced, most of which claimed that the West would be unable to handle the migration flow and eventually ask Georgia to host Afghan refugees: