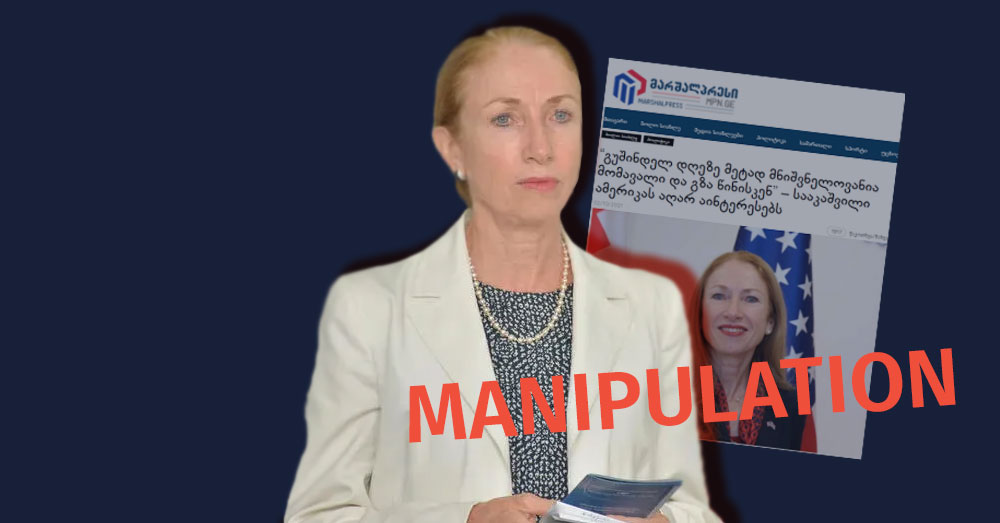 On October 2nd, 2021, the online media outlet “MarshallPress” published information with the following title: “The future and the way forward are more important than yesterday” – The U.S. is no longer interested in Saakashvili.” Attached to the material is a photo of U.S. Ambassador Kelly Degnan, creating the impression that the phrase “The U.S. is no longer interested in Saakashvili” ​​belongs to the U.S. ambassador. The article of “Marshalpress” was shared by “Leader 41” – a Facebook page supportive of the ruling “Georgian Dream” – with an identical text in the headline. 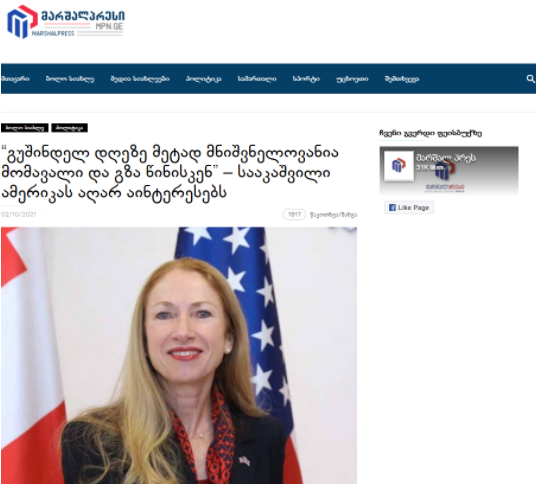 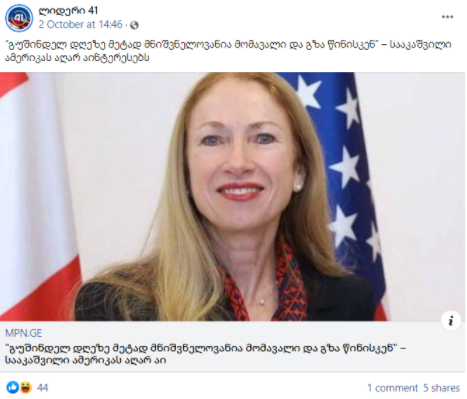 The headline of “Marshallpress” is manipulative, as it does not reflect the statement of Kelly Degnan but the opinion of the author. According to Degnan, Saakashvili’s case will be a test for the Georgian judiciary.

During a visit to Marneuli on October 2nd, U.S. Ambassador to Georgia Kelly Degnan told reporters that Saakashvili’s case would be a test of Georgia’s court and justice system to see how impartial, fair, and open the trials are going to be. In addition, Degnan stressed the need for more stability instead of polarization, which requires concentration on the future and the October 2nd elections.

Kelly Degan, U.S. Ambassador to Georgia: “Talking about progress is more important than speaking about yesterday. We want people to be focused on the elections. I think Georgia needs more political stability, not polarization. There are many important issues that this country needs to address, such as jobs, high prices, housing, education, water, roads. We hope that after these elections, Georgian political leaders will return to work on issues that are a priority for Georgian society.

“Saakashvili’s case will be a test of the Georgian judiciary. We will monitor whether it is conducted impartially, in accordance with Georgian law and Georgia’s international obligations.”

The phrase “The U.S. is no longer interested in Saakashvili” is an interpretation of the editorial board of Marshalpress. Putting it together with the quote of Degnan in the headline is manipulative because it gives the impression that these words belong to the ambassador.

About Marshalpress
Web portal “Marshalpress” appeared in the media space on February 18th, 2015. Marshalpress.ge is issued by Marshalpress Ltd, which, as of May 6th 2015, was owned by Otar Stepanishvili, a former journalist of  Info 9. As a result of changes carried out on November 24th, 2015, the shares were redistributed between Otar Stepanishvili (49%) and Luka Antidze (51%).

Marshalpress has been involved in the discreditation campaign against Aleksandre Lashkarava,  the deceased cameraman of “TV Pirveli,” as well as other opponents of the government. The outlet is often a source of covid-19-related disinformation.