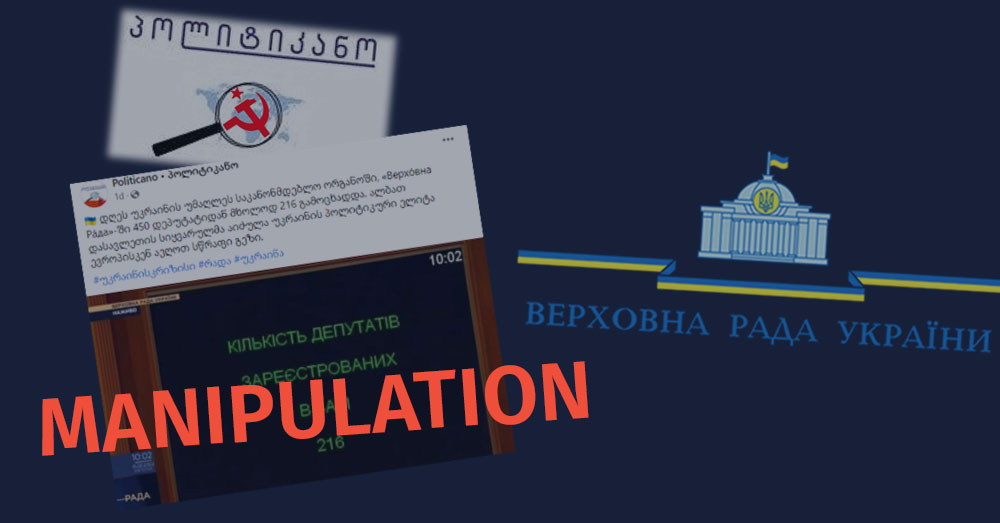 On February 15th, the Facebook page “Politicano” published a post claiming that on February 15th, only 216 deputies were present in the Supreme Legislative Body of Ukraine, the Verkhovna Rada. The author of the post sarcastically notes that “Ukraine’s love for the West has forced political elite to take a political path towards Europe.” In addition, in the comments section of the post, “Politicano” reiterates that 50% of Rada deputies fled the country. 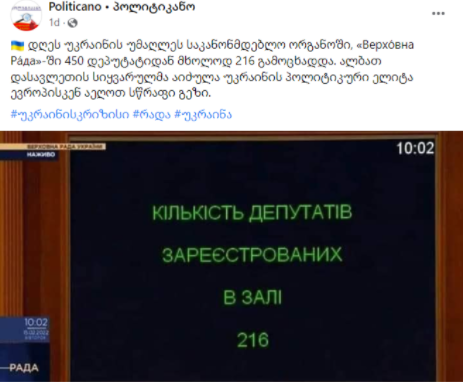 The information disseminated by “Politicano” about the absence of the MPs from the Verkhovna Rada of Ukraine is manipulative. Although only 216 out of 423 MPs registered for the February 15th sitting, their absence was not the result of the fact that they had left the country. At that time, only 23 MPs were absent from Verkhovna Rada in Ukraine, including 12 members of pro-Russian parties.

On February 15th, 216 out of 423 deputies registered to attend the Verkhovna Rada sitting, meaning that 207 MPs did not indeed attend the sitting. On February 16th, the number of attendees increased to 250. It should be noted that the presence of 55-60% of the deputies at the sittings is a common occurrence, and the number has not decreased recently; therefore, the absence of about half of the deputies is not related to the recent developments in Ukraine.

The official website of the Verkhovna Rada allows the users to check the registration of MPs according to the dates of the sitting, which clearly shows that the number of identical attendees in the Rada has been repeatedly stable. For example, back in 2019, when there was neither a state of war nor a pandemic in the country, only half of the MPs attended all the sittings in November and December.

As for the MPs leaving the country, such a trend has indeed been observed in recent days, although their number is nowhere close to the mentioned 50% of the MPs. As of February 14th, only 23 MPs were not in Ukraine, 5 of whom have already returned. It should be noted that out of the deputies who left the country, 12 are members of the pro-Russian “OPZZh” party.

According to France14, online aircraft tracking sites show that up to 20 private jets left Ukraine on February 13th, including Ukrainian businessmen. President Zelenskyy demanded that the oligarchs and members of his party return within 24 hours.