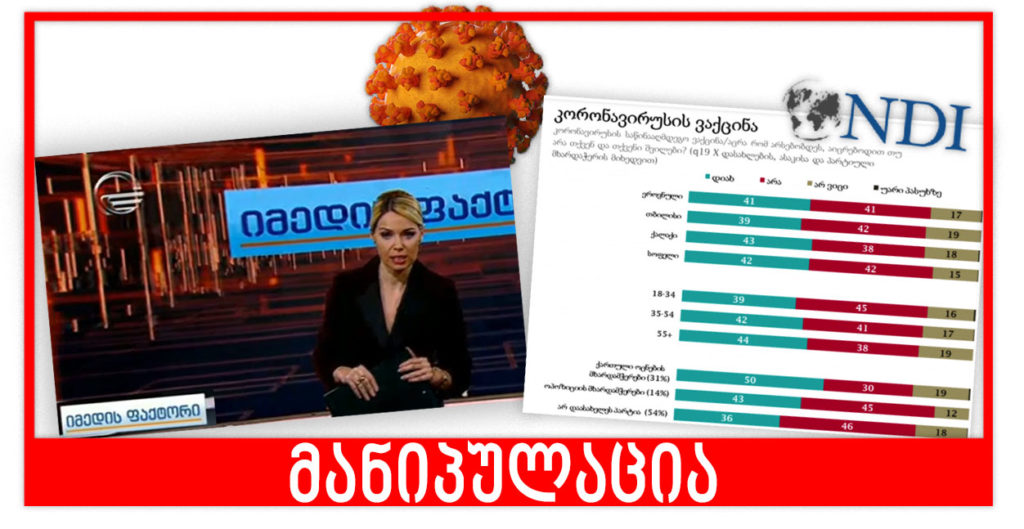 In a program “Imedis Faktori” aired on TV Imedi on 26 January, a presenter, Magda Anikashvili, discussed a recent NDI survey. According to her, responses to the answer about coronavirus vaccine suggest that supporters of the United National Movement (UNM) have reservations with regard to vaccination whereas supporters of the Georgian Dream are willing to get vaccinated. Another program presenter, Vaka Gorgiladze, said that the vaccine skepticism was caused by a low education level of UNM supporters.

Magda Anikashvili, TV Imedi, 26 January: “Let me pick up on the point that has been made about ignorant people and progressives: the NDI survey contains a question about the vaccination and there [in the survey] supporters of the [United] National Movement, i.e. the radical opposition, have skeptical attitudes towards vaccination whereas government supporters are willing to get vaccinated.”

Vaka Gorgiladze, TV Imedi, 26 January: “If we look at this trend and compare it with [the results of] historical surveys over the period of 10-15 years, we will realize that the profile of UNM voter, especially in the area of education, the level of education attained, higher medical [education] or in terms of quality, is significantly lower than [that of Georgian] Dream or other political parties, excluding the Labor [Party] of course.”

Magda Anikashvili manipulatively reported the results of the survey. The majority of the respondents (54%) refused to specify a political party they support and only 14% said that they supported the political opposition; therefore, generalizing the results to the opposition alone is misleading. Furthermore, the CRRC database shows that among the respondents who refuse to take vaccine and name a political party they support, 23% are Georgian Dream supporters and 7% are UNM supporters.

On 24 January 2021, the National Democratic Institute (NDI) published the results of a telephone survey conducted among 2053 respondents in December 2020. Public health was one of priority topics in the survey and one of the questions concerned a vaccine against Covid-19. When asked, “If the Coronavirus vaccine existed, would you vaccinate yourself and your kids?”, around 41% of respondents replied affirmatively. A similar number of respondents (41%) replied negatively and 17% said they did not know. 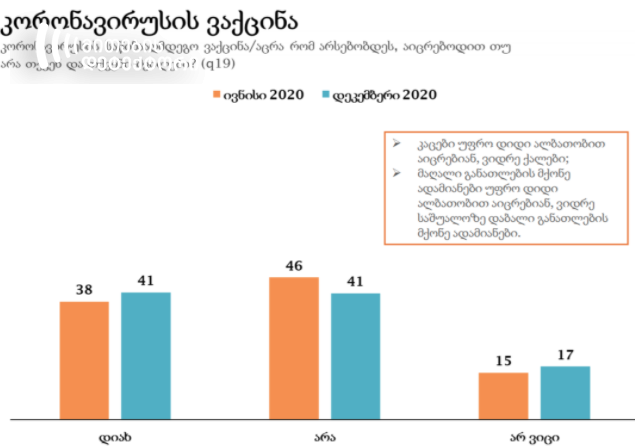 The results on the attitudes towards vaccination are also broken down by political affiliations in the NDI survey, which were reported by Magda Anikashvili. According to the results, the majority of respondents (54%) refrained from specifying a political party they supported. Some 31% identified themselves as Georgian Dream supporters and only 14% identified themselves as supporters of political opposition. 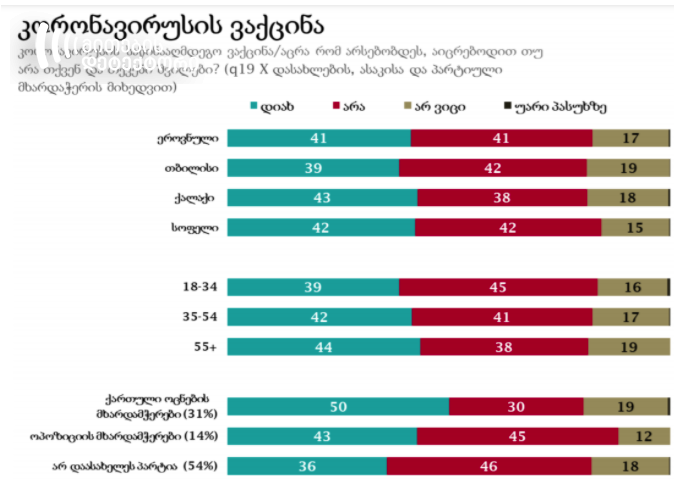 As the majority of respondents has not disclosed their political affiliation, generalization of skepticism towards vaccine to the political opposition alone is misleading.

It should be noted that the NDI survey gives a total number of supporters of political opposition, but in the database of the CRRC, which conducted the survey for the NDI, the data on the replies to the question, “If the Coronavirus vaccine existed, would you vaccinate yourself and your kids?” is broken down further, separating the UNM from the rest of the opposition parties. This data shows that among the respondents who were against the vaccination, 23% supported the Georgian Dream and 7% supported the UNM; 31% did not support any political party while the remaining respondents supported other political parties or refused to name their favorite political party.

As regards those respondents who say they will take the vaccine, 38% supports the Georgian Dream and 5% supports the UNM while the rest either supports other opposition parties or does not support any one of the parties. 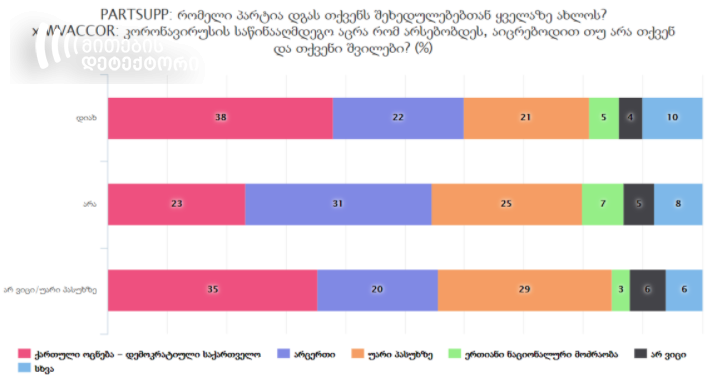