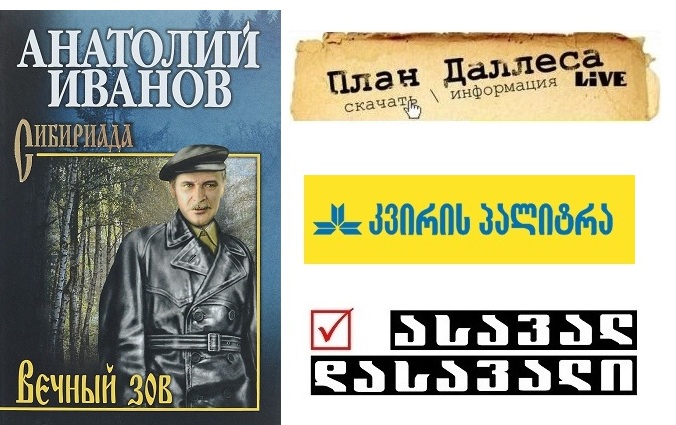 Georgian media and social networks periodically disseminate information about the plan of Allen Dulles, an American diplomat and director of the Central Intelligence Agency (CIA). Some media outlets propagate an idea that the plan was developed for the United States to sow chaos, corrupt national values and promote immorality following the World War II.

In reality, the plan dubbed the Dulles Doctrine is a conspiracy theory, which actually does not exist that is confirmed by the following circumstances:

Fact No 1: Some quotes apparently from the Dulles Doctrine are actually the words belonging to one of the characters of a Soviet novel.

The myths about the so called Dulles Doctrine have originated from Eternal Call, a novel by Soviet writer Anatoli Ivanov.

One of the characters of the novel, Soviet officer Polipov was captured by the Fascists during the World War II; he was questioned by SS officer, who turned out to be his old acquaintance – former member of the Imperial Gendarmerie, Lakhnovski (Russian actor of Georgian origin, Oleg Basilashviili starring as Lakhnovski in the film adaptation). Surprisingly, Lakhnovski discloses Hitler’s secret plans to Polipov. (See a fragment from the book’s online version)

The plan disclosed by Likhnovski to Polipov aims at destruction of Soviet (Russian) people through the fifth column established in Russia. Likhnovski says that they will infringe on historical and spiritual values by joint efforts and grow up individuals, who will violate Russia’s monolithic unity from both inside and outside.

“We will bring them up! We will create as many of them as needed! And only then, afterwards… from all sides – from inside and outside – we will begin to decompose currently monolithic, as your rulers like to repeat, society. We, like worms, will destruct this monolith and make a hole in it.”

The film adaptation of the eponymous novel Eternal Call was shot in 1973 (see Lakhnovski’s monologue from the film).

Portrayal of Lakhnovski’s monologue as the Dulles Doctrine became popular among Russian politicians, public figures and clerics. In 1993 Metropolitan loann released an article “Struggle for Russia”, which contains a phrase from the novel.

In the interview with Kviris Palitra in 2010, the U.S. National Security Council Directive NSC 20/1 was referred to by Soso Manjavidze as a documentary confirmation of the so called Dulles’ Plan.

Conspiracy versions of the document were further developed by Soviet historian, Nikolay Yakovlev in his 1983 book CIA against USSR, which was published in Russian daily newspaper Pravda. Nikolay Yakovlev, who collaborated with KGB, writes that according to the U.S. National Security Council Directive NSC 20/1, the United States aims to weaken Moscow’s political influence and change its foreign political vectors in line with the U.S interests.

In reality, the Directive was developed during the Berlin crisis and it simply outlined the basic U.S. policy towards the Soviet Union. It has nothing to do with the Dulles’ Plan.

Conspiracy theories about the Dulles’ Plan are actively discussed in Russian online media: for example, daily online edition Novorossia of the self-proclaimed Donetsk People’s Republic reviews the so called “text” of the Dulles’ Plan, which repeats the words of one of the characters of the novel. According to the article, Ukraine’s “puppet government” acts just according to the Dulles’ Plan and it is a duty of each and every Novorussian “to pursue a personal war” against this evil.