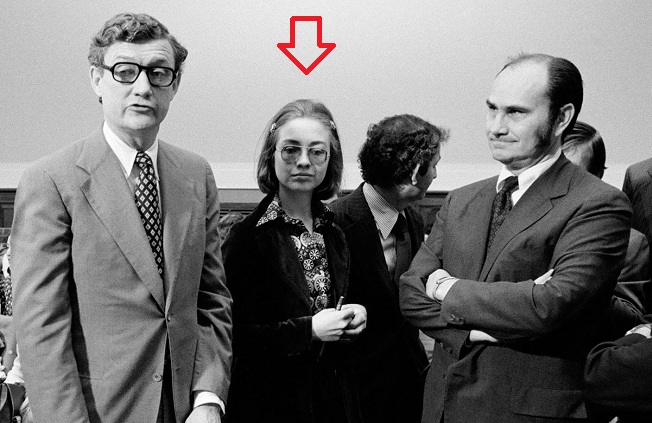 On April 17, 2017, a Facebook page Politicano disseminated a photo representing Hillary Clinton. An inscription accompanied the photograph that Hilary Clinton was representing lawyer of an American pedophile in 1975, accused of raping a 12-year-old child. As a result of her defense, the culprit was released.

The above-mentioned information and photos are manipulative, because they do not reflect reality.

Politicano used a photo in its Facebook post taken during the impeachment hearings of Richard Nixon on the floor of the Congressional Legal Committee in 1974. The photograph represents Hillary Clinton and famous American lawyer John Doar. The photograph has no link with the trial, in which Hillary Clinton was appointed as a public defender by obligatory burden. 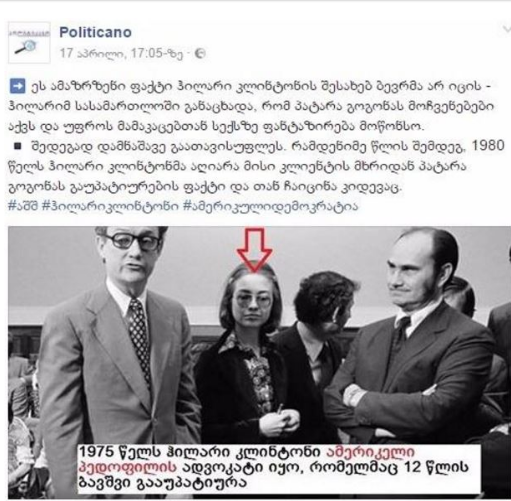 FACT 1. Hilary Clinton was appointed as a public defender to the accused Thomas Taylor as part of her obligation as a barrister, and not by her own will as Politicano claims it.

The trial prosecutor Gibson in an interview with CNN notes that 41-year-old Thomas Taylor’s case Judge appointed Hillary Rodham (later Hillary Rodham Clinton) as the defendant’s attorney, since Taylor had no opportunity to hire a lawyer by his own means. According to the prosecutor, Hillary did not want to be involved with the case, although she was obliged to protect the accused and had no right to refuse the execution of her professional duties. Clinton said in one of her interviews that she asked the judge to dismiss her from participating in the case but her request was refused.

The defendant in a criminal case has the right to use the services of a state appointed public defender and to choose the lawyer himself. This right is being guaranteed by the 6th Amendment of the United States Constitution. The US Supreme Court in the case Gideon v. Wainwright defined that when the defendant does not have an opportunity to hire a lawyer by his own means, the court is obliged to refer to him as a state defender.

Fact 2. Hilary Clinton entered a plea agreement with the prosecution side, after which Thomas Taylor was found guilty and a judge sentenced him to imprisonment for a term of 1 year and a probationary sentence was fixed for a period of four years.

According to Politicano’s post, the culprit was released, but the 1975 trial protocol clearly states that Thomas Taylor, who was defended by Hillary Clinton, was found guilty, on 4 November 1975, of committing a sexual act with a person who had not yet reached the age of 14 and was deprived of liberty for 1 year, with an additional 4 years of probationary sentence.

Hilary Clinton in her written testimony submitted to the court explained that she had information about the victim’s emotionally impairment, her predilection of contriving distorted claims, and that she had previously unfairly blamed others for committing crimes against her person. In order to prove these doubts right, Hillary demanded a forensic psychiatric examination, but the court did not satisfy her appeal. 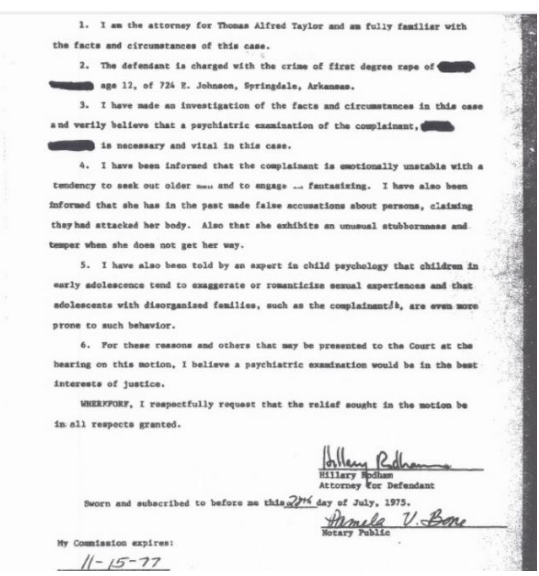 Photo: Hilary Rodham’s written request regarding the assignment of forensic psychiatric evaluation for the victim.

FACT 3. In an interview given in 1980, Hillary Clinton’s laughter did not follow the mentioning of the rape of the girl.

According to Politicano, “In 1980, Clinton admitted that her client was guilty in raping a little girl and even conluded her comment with a little sneer.”

In a conversation with an Arkansas journalist in the 1980s, Hillary Clinton recalled several facts about the Taylor trial, and while recounting several scenarios she did actually grin:

1. Speaking about the polygraph test which was passed by the accused and made Hilary Clinton question the credibility of the machine.

2. Recalling the dispute with the judge that she,as the defendants attorney, had the right to see the evidence, before they still existed.

3. Speaking on the expert, who had to fly over from New York to prevent unlawful action by the state towards the innocent defendant.