Politicano spreads satire from NewsThump as a real research 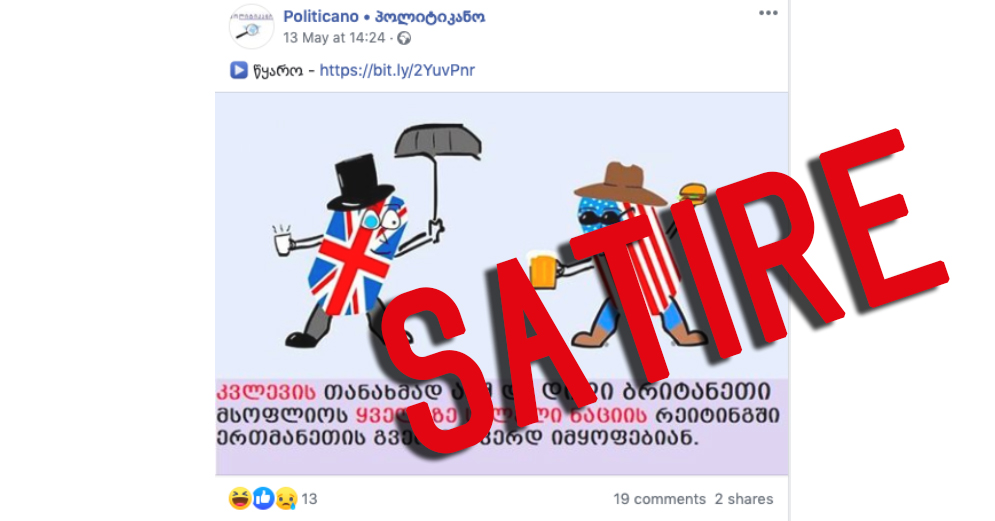 On May 14, 2019, Politicano published a photo with text „According to the research, the USA and Great Britain are next to each other in the rating of the stupidest nations.“ As a source of the mentioned was indicated an article published by the online edition News Thump on September 27, 2016, whose title was repeated by the shared photo in Georgian language. 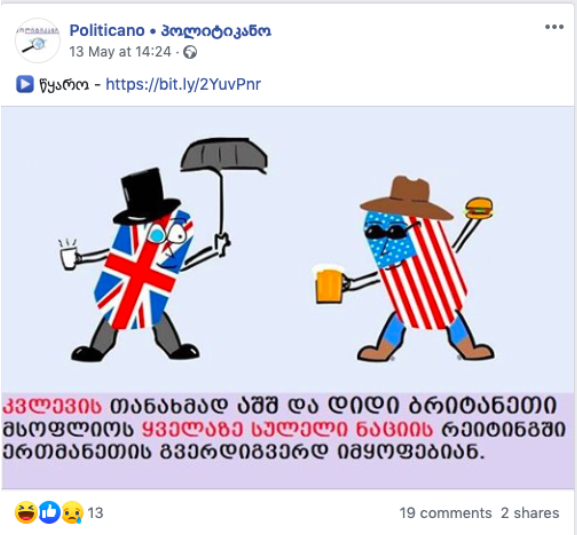 The source that Politicano bases on is a famous British satirical edition. Politicano does not point, that the information is fictitious and the page spreads as a real the non-existent research.

News Thump is a famous satirical edition. It is indicated on the banner of the site, that they publish the parodies and satire.

In the introduction of the article pointed by Politicano we read:

„The rest of the world yet did not manage to decide which nation in the world is the most naive and stupidest, which shows the latest research by each 196 state.“

The content of the article refers to the US presidential elections and Brexit events, namely, someone Simon Williams’s interview from eastern London, who supports Donald Trump’s win in presidential elections as much as the scale will tilt in favor of the naive nation title, to the USA. We also read in the article „The research showed that the Great Britain was an object of insults at the international level just as the USA, first time after 1976. After June 23, the British people claim about 600%-growth of humiliation and insults towards them while travelling abroad, and consequently, many of them prefer to impersonate Scottish, than to appear in a terrible „Brexit talk“.”

Presentation of the invented satirical-humouristic stories as a real information

Presenting the invented satirical news as a real information is one of the propaganda methods. By using this methods, the tabloid and propagandistic  editions try to settle the opinion, that the phenomena such as zoophilia, necrophilia are the life-style characterized for the Western society.

“Myth Detector” has written about the invented stories earlier. Previous satirical news, which various Georgian-language sources presented as real, referred to the rape of alligator, mummy and the wax figure. The project “ФАН” of the Petersburg troll factory invented the story about rape of the goat by a migrant.