Politicano justifies the occupation of Lithuania by the Soviet Union On October 10, 2017,Facebook page ‘Politicano’ published a post, claiming that the return of Vilnius to Lithuanian administration was thanks to the USSR. In Politicano’s post, the term “Soviet Occupation” is written between brackets trying to place it under a an ironic context and attempts are made to overlook first the occupation of the country by the Russian Empire then by the Soviets, only by the fact that the Soviet regime returned Vilnius to Lithuanian control.

Politicano: On 10 October 1939, the Soviet Union ceded to Lithuania the city of Wilno (today’s Vilnius, the capital of Lithuania) and the District of Wilno. At the moment of the hand-over, the territory of the district counted 457 thousand men. Among those were 100 thousand Lithuanians. The majority of the population were Poles, Belarussians and Jews. This is just one forgotten page of the “Soviet occupation” from the history of Lithuania.” Politicano’s article is manipulative, as Wilno (Vilnius) has been named capital of the Grand Duchy of Lithuania from the year 1323. Subsequently, the Soviet Union returned to Lithuania, which historically belonged to its territories. Moreover, Stalin used the issue of handing back Vilnius to Lithuania as leverage to gain a legal basis for the establishment of Soviet military bases in Lithuania. One year after the signing over Vilnius, the Red Army occupied the entirety of Lithuania.

1. Wilno (Vilnius) became the capital of the Grand Duchy of Lithuania in 1323

Encyclopedia Britannica reports that the first settlement in the Wilno area came from the 10th century, and from the year 1323 while the Grand Duke Gediminas was reigning, Wilno was called capital of Lithuanian realm. Then it was destroyed by the Order of Teutonic Knights, but was soon restored. In the Middle Ages, Wilno was one of the main trading centers. As a result of the Treaty of Lublin in 1569, Poland and the Great Duchy of Lithuania became a commonwealth state (the Rzeczpospolita), with a capital in Krakow (from 1793 to Warsaw), as well as in Wilno. Founded in the year 1579, the University of Vilnius played an important role in the development of the city, making Wilno a center of culture and education for the area.

2. At the end of the 18th century, the Russian Empire annexed Vilnius

In 1795, after the Third Partition of Rzeczpospolita, the Russian Empire annexed Vilnius and the city became capital of the Russian province of Vilni. The year 1832 saw the start of the russification process. The Tsarist government claimed that the Vilni province was an intrinsic part of the Russian Empire. In the same year the University of Vilnius was shut down, in 1840 the legislative system was abolished, and from the 60s of the same century, the Russification process affected all spheres public life. Only using the Cyrillic alphabet printed the books. The only acceptable language in the public space, including the education system, was Russian.

Lithuania declared independence on 16 February 1918. The new government of Lithuania was founded in Vilnius, but after the Soviet troops entered Vilnius on January 5, 1919, the government was forced to abandon the city. After a few months’ time, the Polish troops ousted the Red Army from Vilnius, and on April 20, 1919, they took over the city. Poland demanded that Lithuania enter a union with them, but the Lithuanian government refused. Armed confrontation was avoided by creating a demarcation line (Foch line), and Vilnius remained on the Polish side of the line.

In the summer of 1920, the Red Army once again conquered Vilnius and returned to Lithuanian control, which led to a confrontation between Lithuania and Poland. On 7 October 1920, the League of Nations gave control over Vilnius to the Lithuanian government and called on both sides to begin negotiations. Two days later, the Polish armed forces expelled the Lithuanian army from Vilnius and declared the independence of central Lithuania. The government of Lithuania did not recognize the status quo. Vilnius was declared the constitutional capital of Lithuania, while Kaunas was its temporarily capital. Due to the annexation of Vilnius, Lithuania closed down all the borders with Poland and broke all diplomatic ties it had with the occupiers.

4. Stalin used the issue of Vilnius in negotiations with Lithuanians to get their approval for placing Soviet military bases on Lithuanian soil.

On 23 August 1939, the USSR and Nazi Germany agreed on the division of the spheres of influence in Eastern Europe by the signing of the Molotov-Ribbentrop Pact. According to the secret protocol, Lithuania would be part of the Soviet sphere of influence and Poland would be divided in two between Germany and the USSR. On September 17, 1939, the USSR took over Poland and thus Vilnius was placed under its control. On October 3 of the same year, Lithuanian Foreign Minister Juozas Urbšys had a meeting with Stalin in Moscow, details of which the minister recollects in his memoirs.

Stalin requested Urbšys to sign an agreement that included the following points:

The minister opposed Russia’s “virtual” conquest plan and demanded from Stalin to return the parts of Vilnius, which were inhabited by ethnic Lithuanians. Stalin also proclaimed the peace agreement between the USSR and Lithuania in the 1920s, which was the recognition of Lithuanian sovereignty by the USSR, as having many flaws. Lithuania postponed negotiations temporarily.

Foreign Affairs Minister of Lithuania: “Neither Stalin nor Molotov show the least bit of interest in the Lithuanian proposal. Troops will have to be brought in. They remind us once again that under the circumstances any capitalist country would simply occupy Lithuania while they, on the contrary, had no designs on either the independence of Lithuania or its internal affairs.”

On October 7, 1939, the delegation arrived once again in Moscow. On this occasion, Stalin agreed to reduce the number of 50000 soldiers to 20000. In Lithuania it was presumed that the USSR would still proceed with its plan no matter what. On the last visit to Moscow, Stalin refused to negotiate anew and urgently demanded the signing of the agreement. During this period, demonstrations took place in Vilnius, the Lithuanian delegation was forced to sign the document on account of the lack of choice.

Foreign Affairs Minister of Lithuania: “The choice facing the Lithuanian government was as follows:

1. Either sign the mutual assistance treaty as demanded, thereby according the Soviet Union the right to establish a set number of military bases at specific locations on Lithuanian territory, and regain Vilnius and part of its territory;

2. Or, refuse to sign the treaty, fore sake Vilnius, and enter into a ruinous conflict with the Soviet Union. A graphic example of the form which such a conflict could take was the Finnish experience which I have alluded to earlier.

Understandably, the government of Lithuania chose the first alternative.” Moscow, October 10, 1939. Signing the agreement between Lithuania and the USSR On the map, the stars indicate the places where the Soviet army had to be stationed according to the agreement

Almost a year after the signing of the treaty, on June 14, 1940, the Soviet Union imposed an ultimatum to Lithuania and requested an unlimited number of Soviet troops in the territory of Lithuania, as well as demanding the arrest of high-ranking officials for action against the Soviet garrison. After the ultimatum, the Soviet Union started mass repressions in Lithuania. The number of “anti-Soviet elements” reached 320,000. On June 14, 1941, mass deportations started from Lithuania. About 17,000 people were forcibly removed from their homes and had their families divided. As a result, up to 4,000 men were placed in concentration camps, while women, children, and elderly citizens were exiled in the Altai Mountains or to the Tomsky region.

5. On March 11, 1990 Lithuania announced the restoration of its independence and officially ceded from the Soviet Union. 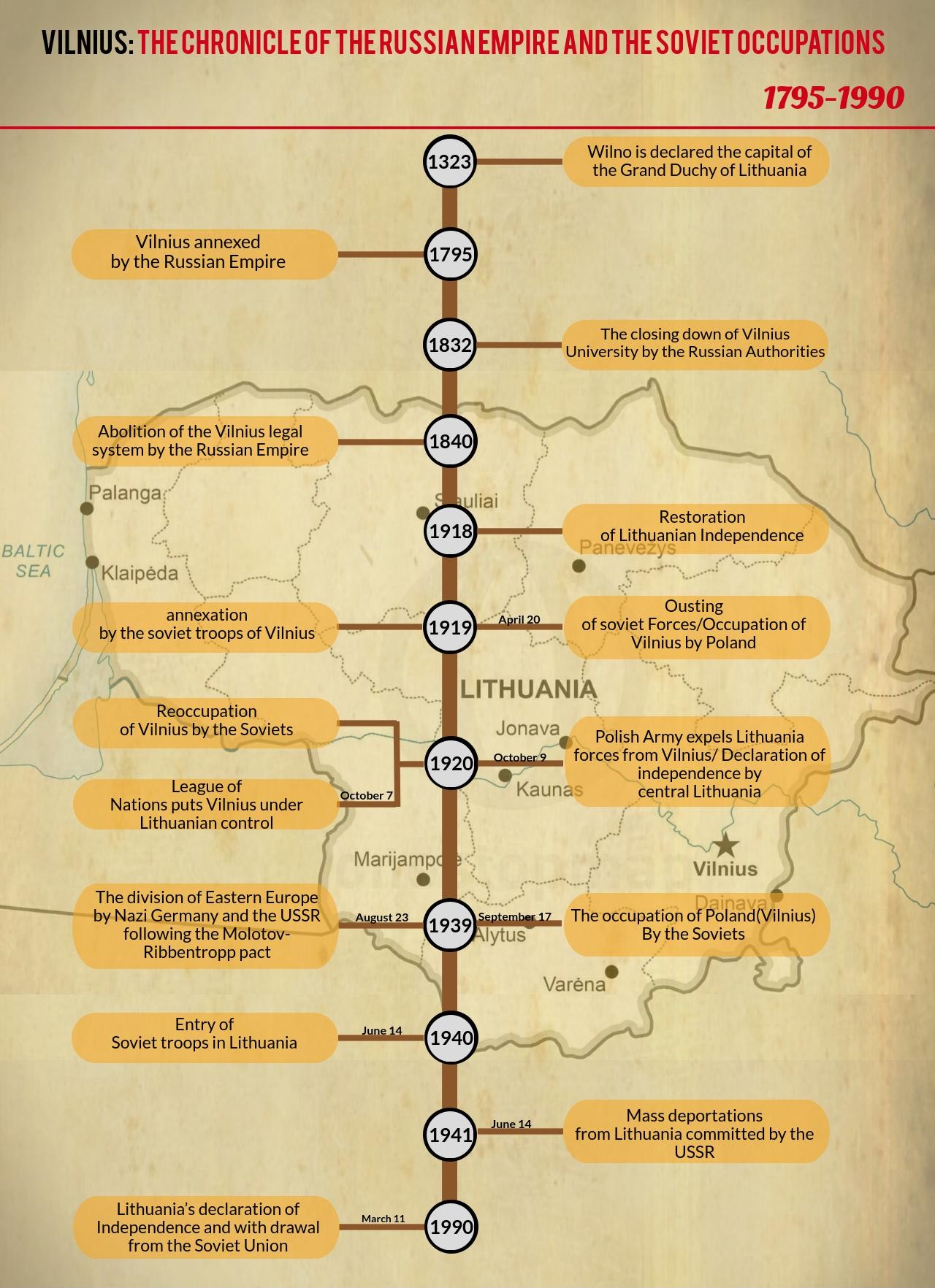