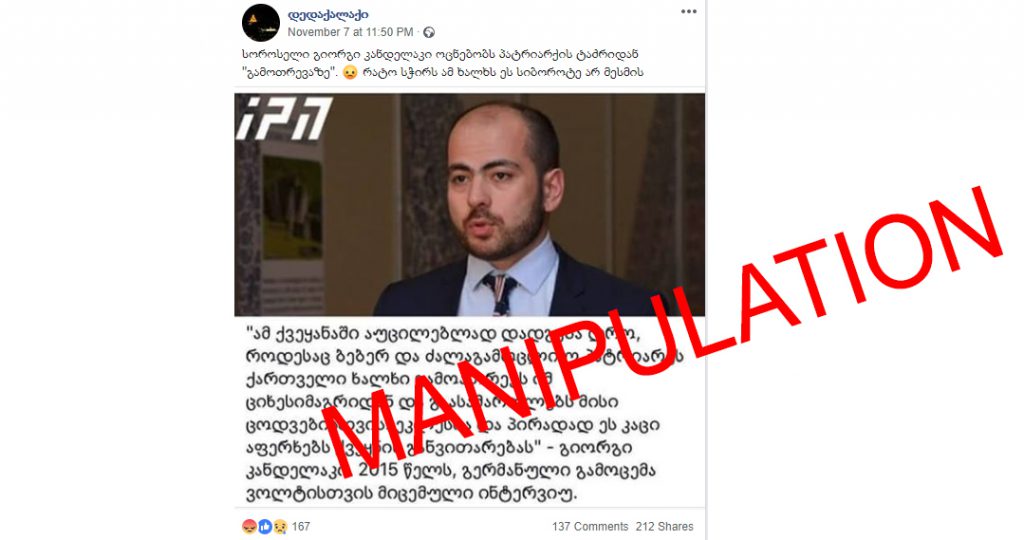 On November 7, a Facebook page “დედაქალაქი” (Capital) published a post citing a statement of Giorgi Kandelaki, a member of the European Georgia party and an MP, that he, according to the Facebook page, made in an interview with a German edition “Wolt” in 2015. According to the given statement, Kandelaki spoke about prosecuting the Patriarch and the people settling their account with him. A logo of an information agency InterPressNews (IPN) accompanied the photo which created the perception that the given information was disseminated in Georgian by IPN. The post came with a caption – “Sorosist Kandelaki against the Patriarch”. The information, disseminated by “დედაქალაქი” is fake, and the photo is photoshopped. There is no German edition called “Wolt”. The most similar to the given name is the German edition Die Welt, however, it is impossible to find an interview with Kandelaki on its webpage. IPN has not published such information either. The fake quote aims to mislead the public by making it believe that George Soros and European Georgia are against the Georgian Orthodox Church.

InterPressNews states that the information, disseminated with the IPN logo in the social network, is a classic fake news story, as no such interview had been published on their webpage. The “screenshot” of the information is photoshopped and it misleads the public, as it creates the perception that Giorgi Kandelaki’s interview was published in Georgian by IPN. Facebook page „დედაქალაქი“ publishes ultra-right content and statements of Georgian March. The page stands out with its ultra-nationalist and anti-liberal materials.