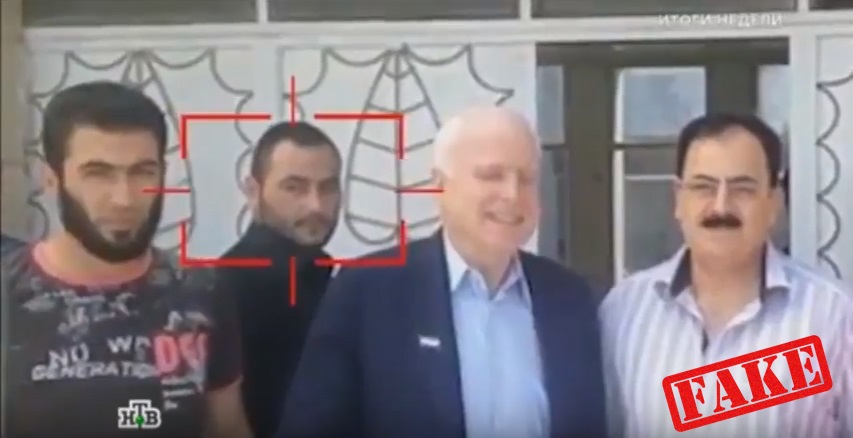 On July 9, 2017, Russian NTV channel aired a story about recent developments in the Near East. Two photographs are used in the story, which, as NTV claims, depict the meeting between U.S. Senator from Arizona, John McCain and leader of the Islamic State, Abu Bakr al-Baghdadi. The anchor and the invited respondent, Thierry Meyssan, who is currently living in Damascus and who previously served as a correspondent for Russian magazine Odnako, claim that the Islamic State has been formed by the United States and Abu Bakr al-Baghdadi is a proxy of the Americans. These photographs are manipulative, because they depict not Abu Bakr al-Baghdadi, but the members of the Free Syrian Army.

The story prepared by NTV uses two photographs with the first one depicting John McCain and the members of the Free Syrian Army outside the building and the second one depicting the meeting itself. The U.S. Senator posted the first photo on his Twitter on May 28, 2013 with the following words: “Important visit with brave fighters in Syria who are risking their lives for freedom and need our help.” Shortly after the photos were posted on Twitter, they were disseminated through social networks and dubbed as a meeting between the U.S. Senator and the members of the Islamic State, namely Abu Bakr al-Baghdadi. The latter was designated as a terrorist by the United States on October 11, 2011.

The Daily Beast and CNN Politics reported that McCain visited Syria in May 2013, where he met with the members of the Free Syrian Army standing in opposition to President Bashar al-Assad during the 2011 civil war. Brian Rogers, McCain’s communications director, responded to the Internet rumors noting that the man, who was misidentified as Baghdadi in the photographs, was a commander of the Northern Storm Brigade, a group linked to the Free Syrian Army.

One more person, who can be identified in those photographs, is Salim Idris, the former Chief of Staff of the Supreme Military Council (SMC) of the Free Syrian Army.

Abu Bakr al-Baghdadi is the leader of the Islamic State. On June 29, 2014, he proclaimed himself the caliph of the Islamic State. Reports of Baghdadi’s death surfaced on July 11, 2017, but the Pentagon did not confirm the rumors. On October 11, 2011 the United States designated al-Baghdadi as a terrorist and announced a reward of up to USD 10 million for information or intelligence leading to his capture or death.

Free Syrian Army is the armed opposition group formed on July 29, 2011 during the civil war in Syria. The organization was formed by Colonel Riad al-Asaad with the goals of protecting peaceful protesters against Bashar al-Assad’s violent government and initiating armed resistance. The Free Syrian Army uses guerrilla tactics against Assad’s regime. In 2013, its 15 members joined the Syrian National Coalition, uniting the opposition organizations and aiming to bring down Assad’s regime.

Since 2001, NTV has been owned by media holding Gazprom Media. NTV channel was launched in 1993 and it was famous for its critical editorial policy towards the Russian government. In 2000, the tax police backed by Russian FSB and prosecutor’s office, raided the TV channel and arrested its owner, Vladimir Gusinsky.

Meyssan, a French journalist, who worked for Russian magazine Odnako till 2015, is a frequent respondent of Russian TV channels. Meyssan’s positions and publications are based on conspiracy theories. He claims in his works that the 9/11 terrorist attacks were masterminded by the United States, while the Beslan school siege was staged by the Central Intelligence Agency (CIA) and implemented by Shamil Basayev, who was trained just by CIA.