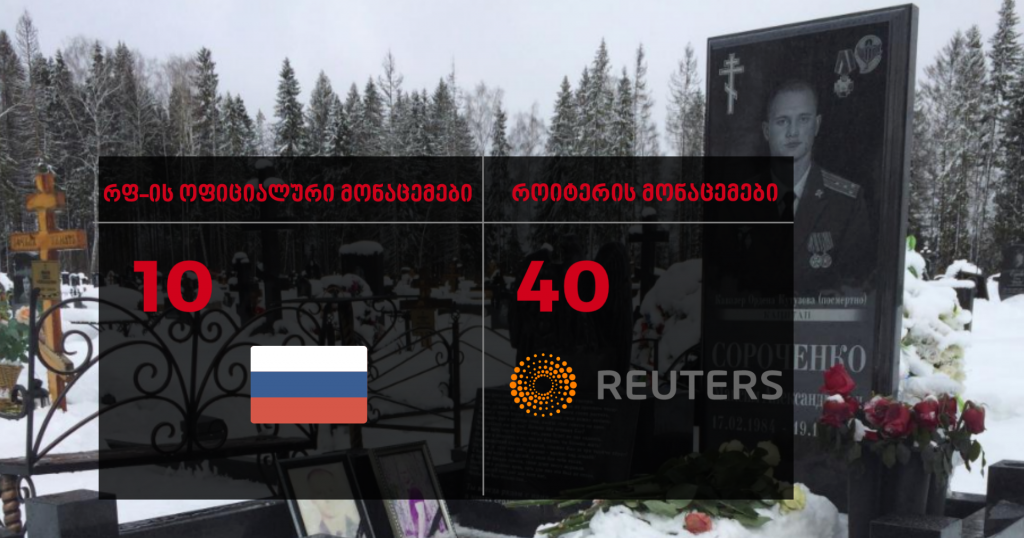 On August, 2017, Russian ORT TV channel aired a story about the  article “Exclusive: Russian losses in Syria jump in 2017, Reuters estimates show” prepared by Reuters news agency. Based on accounts from families and friends of the dead and local officials, Reuters estimates the actual death toll among Russian soldiers and private contractors was at least 40 in 2017, instead of 10 as claimed by the Russian Defense Ministry.

ORT also aired a reciprocal story, in which it accuses Reuters of lying and rejects the facts provided in the article with the following comments made by the Russian Defense Ministry’s official representative:

Igor Konashenkov, the Russian Defense Ministry’s official representative:“It is not the first time that Reuters tries to discredit at any cost the operation aimed at destroying ISIS terrorists and establishing peace in Syria. No “secret” burials of Russian soldiers killed in Syria are taking place. Any attempts to portray them as other persons, who had nothing to do with the armed forces and especially with the Syrian operation, are absolutely vain.”

The ORT story does not provide comments on any concrete case described in Reuters’ article and only alludes to general remarks made by Igor Konashenkov, while Reuters refers to a number of sources to prove the facts.

In its article Reuters alludes to the following factual circumstances:

Based on open sources, Reuters obtained information, according to which there are discrepancies in the number of servicemen killed in Syria and the official data. Most of the deaths reported by Reuters have been confirmed by more than one person, including those who knew the deceased or local officials. In nine cases, Reuters corroborated a death reported in local or social media with another source.

The news agency releases infographics reflecting the casualties reported by the Russian authorities (in red) and Reuters (in blue), indicating a significant rise in the rate of battlefield losses. The infographics is interactive and it lists the names of those reported to have died in 2015-2017. According to the article, of the 40 killed in Syria in 2017, Reuters has evidence that 21 were private contractors and 17 soldiers. The status of the remaining two people is unclear.
See infographics 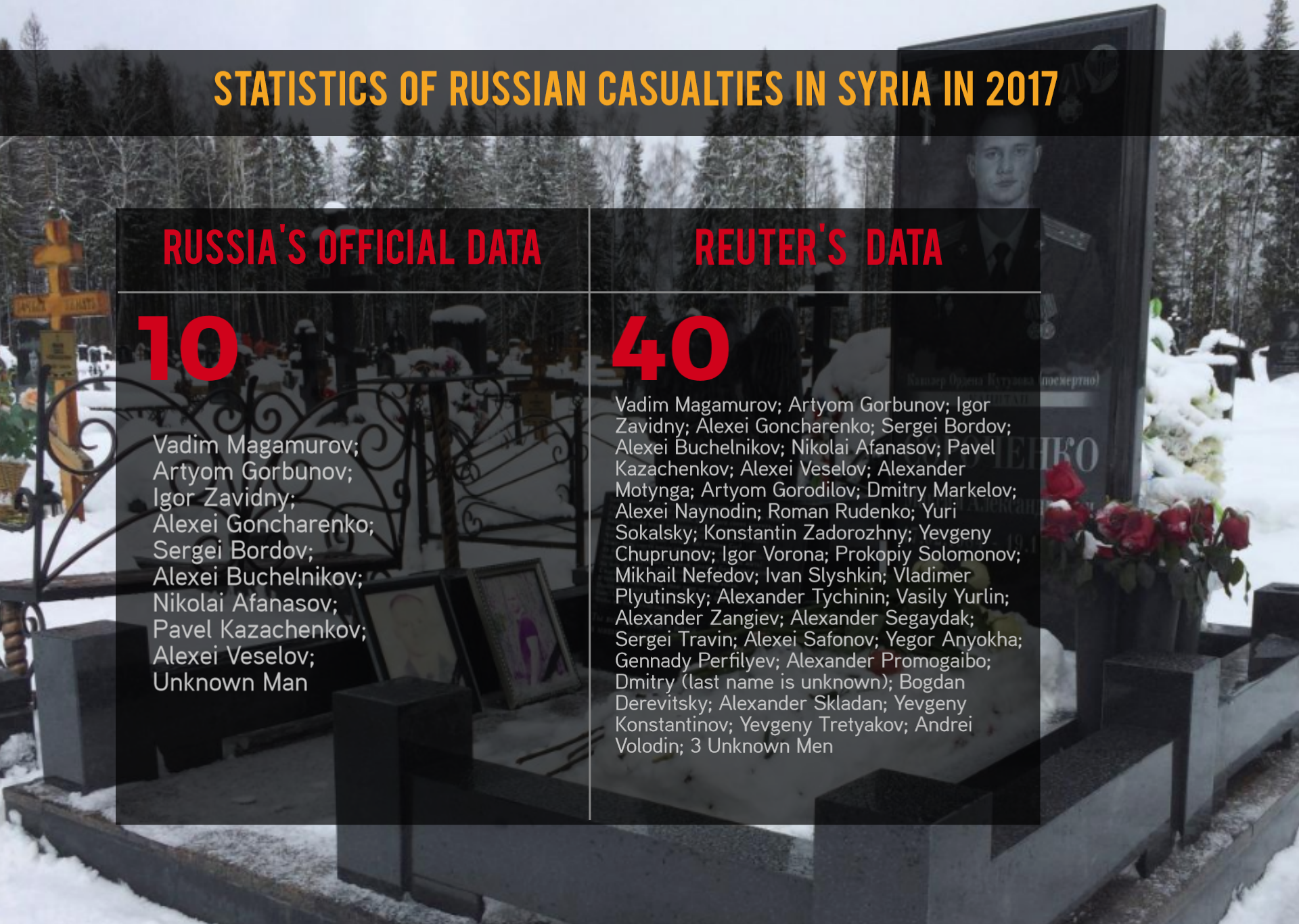 Kremlin spokesperson Dmitry Peskov told reporters that the Russian Defense Ministry did not send Russian volunteers, who were fighting alongside the Syrian army.

Dmitry Peskov, Russian President’s spokesperson: “If there are Russian citizens in Syria fighting as volunteers and so on, they have nothing to do with the [Russian] state.”

Private military companies officially do not exist in Russia. Reuters was unable to get in touch with commanders of Russian private contractors in Syria through people who know them.

According to Reuters’ multiple sources, Russian private military contractors are secretly deployed in Syria under command of a man nicknamed Wagner.

On May 28, 2015, three months before the launch of operation in Syria, Russian President Vladimir Putin  issued a decree on making amendments to the Law on State Secret. According to the decree, deaths of Russian soldiers during special operations in peacetime were classified as a state secret. Alexander Promogaibo (private contractor killed in Syria). One private contractor whose death in Syria was not officially acknowledged was 40-year-old Alexander Promogaibo, from the southern Russian town of Belorechensk. He died in Syria on April 25, his childhood friend Artur Marobyan reports. Promogaibo had earlier fought in the Chechen war with an elite Russian paratroops unit, according to Marobyan, who was his classmate at school. He said his dead friend had struggled to get by while working as a guard in his hometown and needed money to build a house to live with his wife and small daughter. Last year he decided to join private military contractors working closely with the Russian Defense Ministry in Syria and was promised a monthly wage of USD 6 000, about nine times higher than the average Russian salary. According to Marobyan, he got the job offer at a military facility belonging to Russia’s military intelligence agency (GRU). Promogaibo was accepted only after showing up for the third time having losing 55 kg after seven months of training. Gennady Perfilyev (lieutenant colonel killed in Syria). Fifty-one-year-old Russian Gennady Perfilyev, a lieutenant colonel, was deployed in Syria as a military adviser. He was killed in shelling during a reconnaissance trip on April 8, his former classmate at Chelyabinsk Higher Tank Command School said. He also told Reuters that “several grammes of metal hit his heart.” One more classmate confirmed to Reuters Perfilyev was killed in Syria on a reconnaissance trip. His name has not appeared in the Defense Ministry’s official notices of military deaths in Syria. He was buried at a new heavily guarded military cemetery outside Moscow where visitors have to show their passports and are asked at the entrance whose grave they want to visit. On Perfilyev’s gravestone, his name and the date of his death are covered by his portrait. The situation is similar on the graves of other servicemen killed in Syria. Names on other graves, of non-Syrian casualties, are visible.

According to Reuters, months after soldiers die, Russia quietly acknowledges some losses, including of private military contractors. Their families get state posthumous medals and local authorities sometimes name schools, which fallen soldiers attended as children, after them.

In the course of investigation, Reuters applied to the Kremlin and the Russian Defense Ministry for rechecking the facts, but none of them replied to requests for comments.

The graves of servicemen killed in Syria